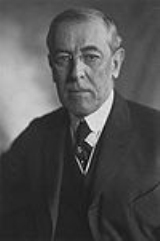 In his first term as President, Wilson persuaded a Democratic Congress
United States Congress
The United States Congress is the bicameral legislature of the federal government of the United States, consisting of the Senate and the House of Representatives. The Congress meets in the United States Capitol in Washington, D.C....
to pass major progressive reforms. Historian John Cooper argues that in his first term, Wilson successfully pushed a legislative agenda that few presidents have equaled, and remained unmatched up until the New Deal
New Deal
The New Deal was a series of economic programs implemented in the United States between 1933 and 1936. They were passed by the U.S. Congress during the first term of President Franklin D. Roosevelt. The programs were Roosevelt's responses to the Great Depression, and focused on what historians call...
.

What problems with American government did Wilson discuss in his work 'Congressional Government'?

1915    William Jennings Bryan resigns as Woodrow Wilson's Secretary of State over a disagreement regarding the United States' handling of the sinking of the {{RMS|Lusitania}}.

1916    U.S. President Woodrow Wilson signs a bill incorporating the Boy Scouts of America, making them the only American youth organization with a federal charter.

1917    World War I: President Woodrow Wilson of the still-neutral United States calls for "peace without victory" in Europe.

1917    The Congress of the United States passes the Immigration Act of 1917 over President Woodrow Wilson's veto. Also known as the ''Asiatic Barred Zone Act'', it forbade immigration from nearly all of south and southeast Asia.

1917    World War I: President Woodrow Wilson asks the U.S. Congress for a declaration of war on Germany.

The object of education is not merely to draw out the powers of the individual mind: it is rather its right object to draw all minds to a proper adjustment to the physical and social world in which they are to have their life and their development: to enlighten, strengthen and make fit.

The white men were roused by a mere instinct of self-preservation … until at last there had sprung into existence a great Ku Klux Klan, a veritable empire of the South, to protect the Southern country.

A History of the American People (1901), describing the Klan as a brotherhood of politically disenfranchised white men. Quoted in The Birth of a Nation

Most men are individuals no longer so far as their business, its activities, or its moralities are concerned. They are not units but fractions; with their individuality and independence of choice in matters of business they have lost all their individual choice within the field of morals.

Liberty is its own reward.

Power consists in one's capacity to link his will with the purpose of others, to lead by reason and a gift of cooperation.