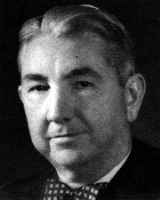 Clark was born in Dallas
Dallas, Texas
Dallas is the third-largest city in Texas and the ninth-largest in the United States. The Dallas-Fort Worth Metroplex is the largest metropolitan area in the South and fourth-largest metropolitan area in the United States...
, Texas to Virginia Maxey Falls and William Henry Clark. A graduate of Dallas High, he served as a Texas National Guard
United States National Guard
The National Guard of the United States is a reserve military force composed of state National Guard militia members or units under federally recognized active or inactive armed force service for the United States. Militia members are citizen soldiers, meaning they work part time for the National...
infantry
Infantry
Infantrymen are soldiers who are specifically trained for the role of fighting on foot to engage the enemy face to face and have historically borne the brunt of the casualties of combat in wars. As the oldest branch of combat arms, they are the backbone of armies...
man in 1918; afterward he studied law, receiving his law degree from the University of Texas School of Law
University of Texas School of Law
The University of Texas School of Law, also known as UT Law, is an ABA-certified American law school located on the University of Texas at Austin campus. The law school has been in operation since the founding of the University in 1883. It was one of only two schools at the University when it was...
in 1922. He was a brother of Delta Tau Delta
Delta Tau Delta
Delta Tau Delta is a U.S.-based international secret letter college fraternity. Delta Tau Delta was founded in 1858 at Bethany College, Bethany, Virginia, . It currently has around 125 student chapters nationwide, as well as more than 25 regional alumni groups. Its national community service...
fraternity, and later served as their international president. He set up a law practice in his home town of Dallas from 1922 to 1937, but resigned from private practice for a period to serve as civil district attorney
District attorney
In many jurisdictions in the United States, a District Attorney is an elected or appointed government official who represents the government in the prosecution of criminal offenses. The district attorney is the highest officeholder in the jurisdiction's legal department and supervises a staff of...
for the city from 1927 to 1932.

Clark, a Democrat, joined the Justice Department
United States Department of Justice
The United States Department of Justice , is the United States federal executive department responsible for the enforcement of the law and administration of justice, equivalent to the justice or interior ministries of other countries.The Department is led by the Attorney General, who is nominated...
in 1937 as a special assistant to the U.S. attorney general for war risk litigation. He served as civilian coordinator for the forced relocation of Japanese-Americans
Japanese American internment
Japanese-American internment was the relocation and internment by the United States government in 1942 of approximately 110,000 Japanese Americans and Japanese who lived along the Pacific coast of the United States to camps called "War Relocation Camps," in the wake of Imperial Japan's attack on...
during the opening months of World War II. He headed the antitrust
Antitrust
The United States antitrust law is a body of laws that prohibits anti-competitive behavior and unfair business practices. Antitrust laws are intended to encourage competition in the marketplace. These competition laws make illegal certain practices deemed to hurt businesses or consumers or both,...
division at Justice in 1943, and the criminal division from 1943 to 1945.

Appointed Attorney General
Attorney General
In most common law jurisdictions, the attorney general, or attorney-general, is the main legal advisor to the government, and in some jurisdictions he or she may also have executive responsibility for law enforcement or responsibility for public prosecutions.The term is used to refer to any person...
by President Harry Truman in 1945, Clark was nominated to the Court on August 2, 1949, filling the vacancy left by the death of Frank Murphy
Frank Murphy
William Francis Murphy was a politician and jurist from Michigan. He served as First Assistant U.S. District Attorney, Eastern Michigan District , Recorder's Court Judge, Detroit . Mayor of Detroit , the last Governor-General of the Philippines , U.S...
. See, Harry S. Truman Supreme Court candidates
Harry S. Truman Supreme Court candidates
During his two terms in office, President Harry S. Truman appointed four members of the Supreme Court of the United States: Chief Justice Fred M. Vinson, and Associate Justices Harold Burton, Tom C. Clark, and Sherman Minton.-Harold Burton nomination:...
. The New York Times called Clark "a personal and political friend [of Truman's] with no judicial experience and few demonstrated qualifications." Nevertheless, Clark was confirmed by the United States Senate
United States Senate
The United States Senate is the upper house of the bicameral legislature of the United States, and together with the United States House of Representatives comprises the United States Congress. The composition and powers of the Senate are established in Article One of the U.S. Constitution. Each...
on August 18, 1949, receiving his commission the following day.

Clark assumed senior status
Senior status
Senior status is a form of semi-retirement for United States federal judges, and judges in some state court systems. After federal judges have reached a certain combination of age and years of service on the federal courts, they are allowed to assume senior status...
, effectively retiring from the Supreme Court, on June 12, 1967. He did so to avoid a conflict of interest
Conflict of interest
A conflict of interest occurs when an individual or organization is involved in multiple interests, one of which could possibly corrupt the motivation for an act in the other....
when his son, Ramsey Clark
Ramsey Clark
William Ramsey Clark is an American lawyer, activist and former public official. He worked for the U.S. Department of Justice, which included service as United States Attorney General from 1967 to 1969, under President Lyndon B. Johnson...
, was appointed Attorney General. He was succeeded on the Court by Thurgood Marshall
Thurgood Marshall
Thurgood Marshall was an Associate Justice of the United States Supreme Court, serving from October 1967 until October 1991...
. Lyndon Johnson was said to have appointed Ramsey Clark as Attorney General precisely to force Tom Clark off the bench, leaving a vacancy so that LBJ could appoint Marshall as the first African-American Justice on the Supreme Court. After Clark's retirement he served as a visiting judge on several U.S. Courts of Appeals
United States courts of appeals
The United States courts of appeals are the intermediate appellate courts of the United States federal court system...
, as director of the Federal Judicial Center
Federal Judicial Center
The Federal Judicial Center is the education and research agency of the United States federal courts. It was established by an Act of Congress in 1967, at the recommendation of the Judicial Conference of the United States....
, and as Chair of the Board of Directors for the American Judicature Society.

Clark died in New York City and is buried in Restland Memorial Park, Dallas, Texas
Dallas, Texas
Dallas is the third-largest city in Texas and the ninth-largest in the United States. The Dallas-Fort Worth Metroplex is the largest metropolitan area in the South and fourth-largest metropolitan area in the United States...
. Tom C. Clark High School
Tom C. Clark High School
Tom C. Clark High School is a high school, operated by the Northside Independent School District, in San Antonio, Texas, United States. Built in 1978 with five main buildings surrounding a court yard with over 120 class rooms it is one of NISD biggest schools.In 2009, the school was rated...
of the Northside Independent School District of San Antonio, Texas is named in honor of him. Also named after him is the Tom C. Clark Building, an office building of the Texas Judiciary in Austin. His former law clerks honored him by creating the Tom C. Clark award given to the outstanding Supreme Court Fellow each year. Winners of this award include Professor Robert George
Robert P. George
Robert P. George is McCormick Professor of Jurisprudence at Princeton University, where he lectures on constitutional interpretation, civil liberties and philosophy of law. He also serves as the director of the James Madison Program in American Ideals and Institutions...
, McCormick Professor of Jurisprudence at Princeton University
Princeton University
Princeton University is a private research university located in Princeton, New Jersey, United States. The school is one of the eight universities of the Ivy League, and is one of the nine Colonial Colleges founded before the American Revolution....
, and Professor Barbara A. Perry
Barbara A. Perry
Dr. Barbara A. Perry, a U.S. Supreme Court and presidency expert, as well as a biographer of the Kennedys, is a Senior Fellow at the University of Virginia's Miller Center and is the former Carter Glass Professor of Government and founding director of the Center for Civic Renewal at Sweet Briar...
, Senior Fellow at the University of Virginia's Miller Center of Public Affairs
Miller Center of Public Affairs
The Miller Center of Public Affairs is a non-partisan research institute that is part of the University of Virginia.Founded in 1975, the Miller Center is a leading public policy institution that serves as a national meeting place where engaged citizens, scholars, students, media representatives and...
and former Carter Glass
Carter Glass
Carter Glass was a newspaper publisher and politician from Lynchburg, Virginia. He served many years in Congress as a member of the Democratic Party. As House co-sponsor, he played a central role in the development of the 1913 Glass-Owen Act that created the Federal Reserve System. Glass...
Professor of Government at Sweet Briar College
Sweet Briar College
Sweet Briar College is a liberal arts women's college in Sweet Briar, Virginia, about north of Lynchburg, Virginia. The school's Latin motto translates as: "She who has earned the rose may bear it."...
. In 1977, Clark became the first recipient of the Distinguished Jurist Award at Mississippi State University
Mississippi State University
The Mississippi State University of Agriculture and Applied Science commonly known as Mississippi State University is a land-grant university located in Oktibbeha County, Mississippi, United States, partially in the town of Starkville and partially in an unincorporated area...
.

An extensive collection of Clark's papers, including his Supreme Court files, is housed at the University of Texas in Austin. The law school also maintains the "Tom C. Clark" fellowship, entitling selected students with a sizable tuition subsidy. The main student lounge in the school is named after Clark as well. A smaller collection, primarily relating to Clark's years as Attorney General, is located at the Harry S. Truman Library in Independence, Missouri.

Justice Clark's personal papers, consisting of 524 linear feet (869 boxes, 20 scrapbooks, around 1,000 photographs, and approximately 100 oversize items) are in the care of the University of Texas School of Law.