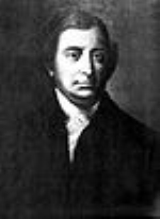 Overview
Edmund Jennings Randolph (August 10, 1753 September 12, 1813) was an American
United States
The United States of America is a federal constitutional republic comprising fifty states and a federal district...
attorney
Lawyer
A lawyer, according to Black's Law Dictionary, is "a person learned in the law; as an attorney, counsel or solicitor; a person who is practicing law." Law is the system of rules of conduct established by the sovereign government of a society to correct wrongs, maintain the stability of political...
, the seventh Governor of Virginia
Governor of Virginia
The governor of Virginia serves as the chief executive of the Commonwealth of Virginia for a four-year term. The position is currently held by Republican Bob McDonnell, who was inaugurated on January 16, 2010, as the 71st governor of Virginia....
, the second Secretary of State
United States Secretary of State
The United States Secretary of State is the head of the United States Department of State, concerned with foreign affairs. The Secretary is a member of the Cabinet and the highest-ranking cabinet secretary both in line of succession and order of precedence...
, and the first United States Attorney General
United States Attorney General
The United States Attorney General is the head of the United States Department of Justice concerned with legal affairs and is the chief law enforcement officer of the United States government. The attorney general is considered to be the chief lawyer of the U.S. government...
.
Randolph was born on August 10, 1753 to the influential Randolph family in Williamsburg, Virginia
Williamsburg, Virginia
Williamsburg is an independent city located on the Virginia Peninsula in the Hampton Roads metropolitan area of Virginia, USA. As of the 2010 Census, the city had an estimated population of 14,068. It is bordered by James City County and York County, and is an independent city...
. He was educated at the College of William and Mary
College of William and Mary
The College of William & Mary in Virginia is a public research university located in Williamsburg, Virginia, United States...
. After graduation he began reading law
Reading law
Reading law is the method by which persons in common law countries, particularly the United States, entered the legal profession before the advent of law schools. This usage specifically refers to a means of entering the profession . A small number of U.S...
with his father John Randolph and uncle, Peyton Randolph
Peyton Randolph
Peyton Randolph was a planter and public official from the Colony of Virginia. He served as speaker of the Virginia House of Burgesses, chairman of the Virginia Conventions, and the first President of the Continental Congress.-Early life:Randolph was born in Tazewell Hall, Williamsburg, Virginia...
. In 1775, with the start of the American Revolution
American Revolution
The American Revolution was the political upheaval during the last half of the 18th century in which thirteen colonies in North America joined together to break free from the British Empire, combining to become the United States of America...
, Randolph's father remained a Loyalist
Loyalist (American Revolution)
Loyalists were American colonists who remained loyal to the Kingdom of Great Britain during the American Revolutionary War. At the time they were often called Tories, Royalists, or King's Men. They were opposed by the Patriots, those who supported the revolution...
and returned to Britain
United Kingdom
The United Kingdom of Great Britain and Northern IrelandIn the United Kingdom and Dependencies, other languages have been officially recognised as legitimate autochthonous languages under the European Charter for Regional or Minority Languages...
; Edmund Randolph remained in America where he joined the Continental Army
Continental Army
The Continental Army was formed after the outbreak of the American Revolutionary War by the colonies that became the United States of America. Established by a resolution of the Continental Congress on June 14, 1775, it was created to coordinate the military efforts of the Thirteen Colonies in...
as aide-de-camp
Aide-de-camp
An aide-de-camp is a personal assistant, secretary, or adjutant to a person of high rank, usually a senior military officer or a head of state...
to General George Washington
George Washington
George Washington was the dominant military and political leader of the new United States of America from 1775 to 1799. He led the American victory over Great Britain in the American Revolutionary War as commander-in-chief of the Continental Army from 1775 to 1783, and presided over the writing of...
.

Upon the death of his uncle Peyton Randolph
Peyton Randolph
Peyton Randolph was a planter and public official from the Colony of Virginia. He served as speaker of the Virginia House of Burgesses, chairman of the Virginia Conventions, and the first President of the Continental Congress.-Early life:Randolph was born in Tazewell Hall, Williamsburg, Virginia...
in October of 1775 Randolph returned to Virginia
Virginia
The Commonwealth of Virginia , is a U.S. state on the Atlantic Coast of the Southern United States. Virginia is nicknamed the "Old Dominion" and sometimes the "Mother of Presidents" after the eight U.S. presidents born there...
to act as executor of the estate, and while there was elected as a representative to the Virginia Convention.

Do you know where I might obtain a copy of the French correspondence that led to Randolphs resignation?
More
x