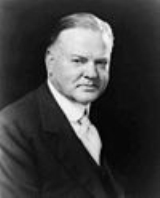 What are 5 things that Hoover did while in office??

The ban on the sale and consumption of alcohol(as provided by the eighteenth amendment was called what?

Why did he leave from cabinet
More

What did President Herbert Hoover do for the people as a republican?

While the crash only took place six months ago, I am convinced that we have now passed the worst and with continuity of effort we shall rapidly recover.

Address to the United States Chamber of Commerce (1 May 1930)

The American people are doing their job today. They should be given a chance to show whether they wish to preserve the principles of individual and local responsibility and mutual self-help before they embark on what I believe to be a disastrous system. I feel sure they will succeed if given the opportunity.

A good many things go around in the dark besides Santa Claus.

Blessed are the young, for they shall inherit the national debt.

Older men declare war. But it is youth that must fight and die. And it is youth who must inherit the tribulation, the sorrow and the triumphs that are the aftermath of war.