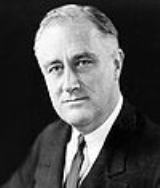 Who messed up the nation mor FDR or obama

I have a silk hankerchif that was sent to my dads parents not long after he was born from FDR. It has ( HAPPY DAYS and FDR's name embrordered in the...

Before the Presidency of Franlin D. Roosevelt, the nature of news coverage in the Washington D.C. area had been:

Legally, what constitutes neutrality during wartime? After the passage of the Lend Lease Law was the United States still neutral?

I am fascinated by the way he hid his disability from the public. Did anybody in this forum ever see FDR "walking" with the aid of his son or somebody...
More

How did FDR's polio affect his presidency?

Who messed up the nation mor FDR or obama FDR besids piking the right sid in WW II did not help out the nation obama becids keping the war what did he...

What were some of FDR's greatest achievements as President?

What is FDR's legacy?
More

1933    Great Depression: Franklin D. Roosevelt addresses the nation for the first time as President of the United States. This was also the first of his "fireside chats".

1935    The National Labor Relations Act, which governs labor relations in the United States, is signed into law by President Franklin D. Roosevelt.

I pledge you, I pledge myself, to a New Deal|new deal for the American people.

Confidence... thrives on honesty, on honor, on the sacredness of obligations, on faithful protection and on unselfish performance. Without them it cannot live.

Happiness lies not in the mere possession of money; it lies in the joy of achievement, in the thrill of creative effort.

There seems to be no question that [Mussolini] is really interested in what we are doing and I am much interested and deeply impressed by what he has accomplished and by his evidenced honest purpose of restoring Italy.

Comment in early 1933 about Benito Mussolini to US Ambassador to Italy Breckinridge Long|Breckinridge Long, as quoted in Three New Deals : Reflections on Roosevelt's America, Mussolini's Italy, and Hitler's Germany, 1933-1939 (2006) by Wolfgang Schivelbusch, p. 31

I don't mind telling you in confidence that I am keeping in fairly close touch with that admirable Italian gentleman.