Chatham Dockyard, located on the River Medway
River Medway
The River Medway, which is almost entirely in Kent, England, flows for from just inside the West Sussex border to the point where it enters the Thames Estuary....
and of which two-thirds is in Gillingham
Gillingham, Kent
Gillingham is a town in the unitary authority of Medway in South East England. It is part of the ceremonial county of Kent. The town includes the settlements of Brompton, Hempstead, Rainham, Rainham Mark and Twydall....
and one third in Chatham, Kent
Kent
Kent is a county in southeast England, and is one of the home counties. It borders East Sussex, Surrey and Greater London and has a defined boundary with Essex in the middle of the Thames Estuary. The ceremonial county boundaries of Kent include the shire county of Kent and the unitary borough of...
, England
England
England is a country that is part of the United Kingdom. It shares land borders with Scotland to the north and Wales to the west; the Irish Sea is to the north west, the Celtic Sea to the south west, with the North Sea to the east and the English Channel to the south separating it from continental...
, came into existence at the time when, following the Reformation
English Reformation
The English Reformation was the series of events in 16th-century England by which the Church of England broke away from the authority of the Pope and the Roman Catholic Church....
, relations with the Catholic
Catholic
The word catholic comes from the Greek phrase , meaning "on the whole," "according to the whole" or "in general", and is a combination of the Greek words meaning "about" and meaning "whole"...
countries of Europe had worsened, leading to a requirement for additional defences. For 414 years Chatham Dockyard provided over 500 ships for the Royal Navy
Royal Navy
The Royal Navy is the naval warfare service branch of the British Armed Forces. Founded in the 16th century, it is the oldest service branch and is known as the Senior Service...
, and was forefront of shipbuilding
Shipbuilding
Shipbuilding is the construction of ships and floating vessels. It normally takes place in a specialized facility known as a shipyard. Shipbuilders, also called shipwrights, follow a specialized occupation that traces its roots to before recorded history.Shipbuilding and ship repairs, both...
, industrial and architectural technology
Architecture
Architecture is both the process and product of planning, designing and construction. Architectural works, in the material form of buildings, are often perceived as cultural and political symbols and as works of art...
. At its height, it employed over 10,000 skilled artisan
Artisan
An artisan is a skilled manual worker who makes items that may be functional or strictly decorative, including furniture, clothing, jewellery, household items, and tools...
s and covered 400 acres (1.6 km²). Chatham dockyard closed in 1984, and 84 acres (339,936.2 m²) of the Georgian dockyard is now managed as a visitor attraction by the Chatham Historic Dockyard Trust
Chatham Historic Dockyard
Chatham Historic Dockyard is a maritime museum on part of the site of the former royal/naval dockyard at Chatham in Kent, England.Chatham Dockyard covered 400 acres and was one of the Royal Navy's main facilities for several hundred years until it was closed in 1984. After closure the dockyard was...
.

Francis Drake also lived in the old hulks there and spent his youth in Medway.

Anchor Wharf and the Ropery

Defence of the dockyard 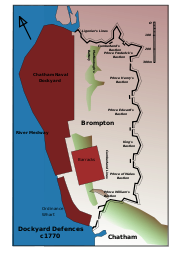 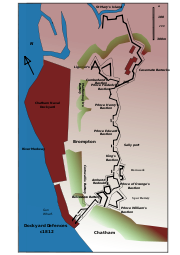 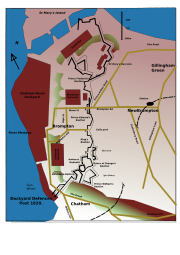 Dockyards have always required shore defences. Among the earliest for Chatham was Upnor Castle
Upnor Castle
Upnor Castle is an Elizabethan artillery fort located in the village of Upnor, Kent, England. Its purpose was to defend ships moored "in ordinary" on the River Medway outside Chatham dockyards....
, built in 1567, on the opposite side of the River Medway
River Medway
The River Medway, which is almost entirely in Kent, England, flows for from just inside the West Sussex border to the point where it enters the Thames Estuary....
. It was somewhat unfortunate that on the one occasion it was required for action in the Raid on the Medway
Raid on the Medway
The Raid on the Medway, sometimes called the Battle of the Medway, Raid on Chatham or the Battle of Chatham, was a successful Dutch attack on the largest English naval ships, laid up in the dockyards of their main naval base Chatham, that took place in June 1667 during the Second Anglo-Dutch War...
, 1667, the Dutch fleet were able to sail right past it to attack the British fleet, to carry off the pride of the fleet the Royal Charles back to the Netherlands.

During the wars with Spain it was usual for ships to anchor at Chatham in reserve; consequently John Hawkins
John Hawkins
Admiral Sir John Hawkins was an English shipbuilder, naval administrator and commander, merchant, navigator, and slave trader. As treasurer and controller of the Royal Navy, he rebuilt older ships and helped design the faster ships that withstood the Spanish Armada in 1588...
threw a massive chain across the River Medway for extra defence. Hawkins' chain was later replaced with a boom of masts, iron, cordage, and the hulls of two old ships, besides a couple of ruined pinnacles. This arrangement was again upgraded around 1645.

With the failure of Upnor castle it was seen necessary to increase the defences. In the event, those defences were built in distinct phases, as the government saw the increasing threat of invasion. The building was as follows [complete details can be seen at the external link]:


Growth of the dockyard

The growing importance of the dockyard was illustrated between 1619-20 with the addition of two new mast ponds, and the granting of additional land on which a dock, storehouse, and various brick and lime kilns were planned.

The renewed outbreak of war with Spain demonstrated the need for such readiness, and in 1710 land was ordered to be bought to improve the dockyard.

By the year 1770 the establishment had so expanded that, including the gun wharf, it stretched a mile (1.6 km) in length, and included an area of in excess of 95 acres (384,000 m²), possessing four slip ways and four large docks.

The officers and men employed in the yard also increased, and by 1798 they numbered 1,664, including 49 officers and clerks and 624 shipwrights. Additionally required were the blockmakers, caulkers, pitch-heaters, blacksmith
Blacksmith
A blacksmith is a person who creates objects from wrought iron or steel by forging the metal; that is, by using tools to hammer, bend, and cut...
s, joiner
Joiner
A joiner differs from a carpenter in that joiners cut and fit joints in wood that do not use nails. Joiners usually work in a workshop since the formation of various joints generally requires non-portable machinery. A carpenter normally works on site...
s and carpenter
Carpenter
A carpenter is a skilled craftsperson who works with timber to construct, install and maintain buildings, furniture, and other objects. The work, known as carpentry, may involve manual labor and work outdoors....
s, sail makers, rigger
Rigger
Rigger may refer to:* One who attends to the rigging of a sailing ship* Rigger , those who tend rigging in stage performance * Rigger , specializing in moving large/heavy objects* Parachute rigger...
s, and ropemakers (274), as well as bricklayer
Bricklayer
A bricklayer or mason is a craftsman who lays bricks to construct brickwork. The term also refers to personnel who use blocks to construct blockwork walls and other forms of masonry. In British and Australian English, a bricklayer is colloquially known as a "brickie".The training of a trade in...
s, labourers and others.

The dockyard's final task was refitting nuclear
Nuclear reactor
A nuclear reactor is a device to initiate and control a sustained nuclear chain reaction. Most commonly they are used for generating electricity and for the propulsion of ships. Usually heat from nuclear fission is passed to a working fluid , which runs through turbines that power either ship's...
submarine
Submarine
A submarine is a watercraft capable of independent operation below the surface of the water. It differs from a submersible, which has more limited underwater capability...
s. HMS Hermione
HMS Hermione (F58)
HMS Hermione was a Leander-class frigate of the Royal Navy . She was, like the rest of her class, named after a figure of mythology. Hermione was built by Alexander Stephen and Sons, though she was completed by Yarrow Shipbuilders...
was the last ship launched from there, though she had not been built there, but merely refitted.

The dockyard closed in 1984. It covered 400 acres (1.6 km²). After closure this was divided into three sections. The easternmost basin was handed over to the Medway Ports
Medway Ports
Medway Ports, incorporating the Port of Sheerness and Chatham Docks is part of Peel Ports, the second largest port group in the United Kingdom. The Ports authority is also responsible for the harbour, pilotage and conservancy matters for of the River Medway, from the Medway Buoy to Allington Lock...
authority and is now a commercial port. 80 acres (324,000 m²), comprising the 18th century core of the site, was transferred to a charity called the Chatham Historic Dockyard Trust
Chatham Historic Dockyard
Chatham Historic Dockyard is a maritime museum on part of the site of the former royal/naval dockyard at Chatham in Kent, England.Chatham Dockyard covered 400 acres and was one of the Royal Navy's main facilities for several hundred years until it was closed in 1984. After closure the dockyard was...
and is now open as a visitor attraction. The other tranche was converted into a mixed commercial, residential and leisure development.

St Mary's Island
St Mary's Island, Kent
St Mary's Island, is part of the Chatham Maritime development area in Medway, South East England. It is located at the northern end of Chatham, adjacent to Brompton and Gillingham...
, a 150 acre (0.607029 km²) site, once a part of the Dockyard, has been transformed to a residential community for some 1,500 homes. It has several themed areas with traditional maritime buildings, a fishing (in looks only) village with its multicoloured houses and a modern energy-efficient concept. Many homes have views of the River Medway. A primary school (St. Mary's CofE) and a medical centre
Clinic
A clinic is a health care facility that is primarily devoted to the care of outpatients...
provide facilities for the residents and there are attractive walks around the Island. 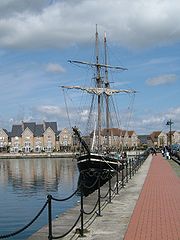