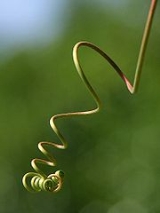 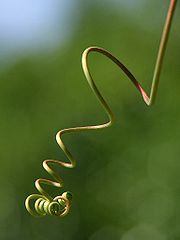 A vine in the narrowest sense is the grapevine (Vitis
Vitis
Vitis is a genus of about 60 species of vining plants in the flowering plant family Vitaceae. The genus is made up of species predominantly from the Northern hemisphere. It is economically important as the source of grapes, both for direct consumption of the fruit and for fermentation to produce...
), but more generally it can refer to any plant
Plant
Plants are living organisms belonging to the kingdom Plantae. Precise definitions of the kingdom vary, but as the term is used here, plants include familiar organisms such as trees, flowers, herbs, bushes, grasses, vines, ferns, mosses, and green algae. The group is also called green plants or...
with a growth habit
Habit (biology)
Habit, when used in the context of biology, refers to the instinctive actions of animals and the natural tendencies of plants.In zoology, this term most often refers to specific behavioral characteristics, even when directly related to physiology...
of trailing or scandent, that is to say climbing, stems or runners. The word also can refer to such stems or runners themselves, for instance when used in wicker
Wicker
Wicker is hard woven fiber formed into a rigid material, usually used for baskets or furniture. Wicker is often made of material of plant origin, but plastic fibers are also used....
work. 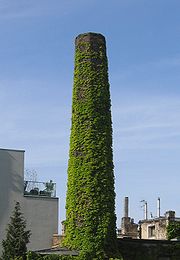 Certain plants always grow as vines, while a few grow as vines only part of the time. For instance, poison ivy
Poison ivy
Toxicodendron radicans, better known as poison ivy , is a poisonous North American plant that is well known for its production of urushiol, a clear liquid compound found within the sap of the plant that causes an itching rash in most people who touch it...
and bittersweet
Solanum dulcamara
Solanum dulcamara, also known as bittersweet, bittersweet nightshade, bitter nightshade, blue bindweed, Amara Dulcis, climbing nightshade, fellenwort, felonwood, poisonberry, poisonflower, scarlet berry, snakeberry, trailing bittersweet, trailing nightshade, violet bloom, or woody...
can grow as low shrubs when support is not available, but will become vines when support is available.

A vine displays a growth form based on long stems
Plant stem
A stem is one of two main structural axes of a vascular plant. The stem is normally divided into nodes and internodes, the nodes hold buds which grow into one or more leaves, inflorescence , conifer cones, roots, other stems etc. The internodes distance one node from another...
. This has two purposes. A vine may use rock exposures, other plants, or other supports for growth rather than investing energy in a lot of supportive tissue, enabling the plant to reach sunlight with a minimum investment of energy. This has been a highly successful growth form for plants such as kudzu
Kudzu
Kudzu is a plant in the genus Pueraria in the pea family Fabaceae, subfamily Faboideae. It is a climbing, coiling, and trailing vine native to southern Japan and southeast China. Its name comes from the Japanese name for the plant, . It is a weed that climbs over trees or shrubs and grows so...
and Japanese honeysuckle
Japanese Honeysuckle
The Japanese Honeysuckle is a species of honeysuckle native to eastern Asia including China , Japan, and Korea. It is a twining vine able to climb up to high or more in trees, with opposite, simple oval leaves long and broad...
, both of which are invasive exotics in parts of North America
North America
North America is a continent wholly within the Northern Hemisphere and almost wholly within the Western Hemisphere. It is also considered a northern subcontinent of the Americas...
. There are some tropical vines that develop skototropism, and grow away from the light, a type of negative phototropism
Phototropism
Phototropism is directional growth in which the direction of growth is determined by the direction of the light source. In other words, it is the growth and response to a light stimulus. Phototropism is most often observed in plants, but can also occur in other organisms such as fungi...
. Growth away from light allows the vine to reach a tree trunk, which it can then climb to brighter regions.

The vine growth form may also enable plants to colonize large areas quickly, even without climbing high. This is the case with periwinkle
Vinca
Vinca is a genus of six species in the family Apocynaceae, native to Europe, northwest Africa and southwest Asia. The English name periwinkle is shared with the related genus Catharanthus .-Description:Vinca plants are subshrubs or herbaceous, and have slender trailing stems 1–2 m long...
and ground ivy. It is also an adaptation to life in areas where small patches of fertile soil are adjacent to exposed areas with more sunlight but little or no soil. A vine can root in the soil but have most of its leaves in the brighter, exposed area, getting the best of both worlds.

A climbing habit has evolved independently in several plant families, using many different climbing methods. Some plants climb by twining their stems around a support (e.g., morning glories, Ipomoea
Ipomoea
Ipomoea is the largest genus in the flowering plant family Convolvulaceae, with over 500 species. Most of these are called "morning glories", but this can refer to related genera also. Those formerly separated in Calonyction are called "moonflowers"...
species). Others climb by way of adventitious, clinging roots (e.g., ivy, Hedera species), with twining petioles (e.g., Clematis
Clematis
Clematis is a genus of about 300 species within the buttercup family Ranunculaceae. Their garden hybrids have been popular among gardeners beginning with Clematis × jackmanii, a garden standby since 1862; more hybrid cultivars are being produced constantly. They are mainly of Chinese and Japanese...
species), or using tendril
Tendril
In botany, a tendril is a specialized stem, leaf or petiole with a threadlike shape that is used by climbing plants for support, attachment and cellular invasion by parasitic plants, generally by twining around suitable hosts. They do not have a lamina or blade, but they can photosynthesize...
s, which can be specialized shoots (Vitaceae
Vitaceae
Vitaceae are a family of dicotyledonous flowering plants including the grapevine and Virginia creeper. The family name is derived from the genus Vitis...
), leaves (Bignoniaceae
Bignoniaceae
The Bignoniaceae, or Trumpet Creeper Family, is a family of flowering plants comprising about 650-750 species in 116-120 genera. Members of the family are mostly trees and lianas , shrubs and more rarely herbaceous plants. As climber plants, they are twine climbers or tendril climbers, and rarely...
), or even inflorescences (Passiflora). Others climb through the use of thorns, which pierce the support (e.g. climbing rose
Rose
A rose is a woody perennial of the genus Rosa, within the family Rosaceae. There are over 100 species. They form a group of erect shrubs, and climbing or trailing plants, with stems that are often armed with sharp prickles. Flowers are large and showy, in colours ranging from white through yellows...
); or by other hooked structures, such as hooked branches (e.g. Artabotrys hexapetalus). The climbing fetterbush (Pieris phillyreifolia) is a woody shrub-vine which climbs without clinging roots, tendrils, or thorns. It directs its stem into a crevice in the bark of fibrous barked trees (such as bald cypress) where the stem adopts a flattened profile and grows up the tree underneath the host tree's outer bark. The fetterbush then sends out branches that emerge near the top of the tree.
Species of Parthenocissus
Parthenocissus
Parthenocissus , creepers, is a genus of climbing plants from the grape family, Vitaceae. It contains about 12 species, from Asia and North America. Several are grown for ornamental use....
(Vitaceae) produce twining tendrils that are modified stems, but which also produce adhesive pads at the end that attach themselves quite strongly to the support. The evolution of a climbing habit has been implicated as a key innovation associated with the evolutionary success and diversification of a number of taxonomic groups of plants.

Most vines are flowering plants. These may be divided into woody vines or liana
Liana
A liana is any of various long-stemmed, woody vines that are rooted in the soil at ground level and use trees, as well as other means of vertical support, to climb up to the canopy to get access to well-lit areas of the forest. Lianas are especially characteristic of tropical moist deciduous...
s, such as wisteria
Wisteria
Wisteria is a genus of flowering plants in the pea family, Fabaceae, that includes ten species of woody climbing vines native to the eastern United States and to China, Korea, and Japan. Aquarists refer to the species Hygrophila difformis, in the family Acanthaceae, as Water Wisteria...
, kiwifruit
Kiwifruit
The kiwifruit, often shortened to kiwi in many parts of the world, is the edible berry of a cultivar group of the woody vine Actinidia deliciosa and hybrids between this and other species in the genus Actinidia....
, and common ivy, and herbaceous (nonwoody) vines, such as morning glory
Morning glory
Morning glory is a common name for over 1,000 species of flowering plants in the family Convolvulaceae, whose current taxonomy and systematics is in flux...
.

One odd group of vining plants is the fern genus Lygodium, called climbing ferns. The stem does not climb, but rather the fronds (leaves) do. The fronds unroll from the tip, and theoretically never stop growing. In the meantime, they can form thickets as they unroll over other plants, rockfaces, and fences.


Use as garden plants

Gardeners can use the tendency of climbing plants to grow quickly. If a plant display is wanted quickly, a climber can achieve this. Climbers can be trained over wall
Wall
A wall is a usually solid structure that defines and sometimes protects an area. Most commonly, a wall delineates a building and supports its superstructure, separates space in buildings into rooms, or protects or delineates a space in the open air...
s, pergola
Pergola
A pergola, arbor or arbour is a garden feature forming a shaded walkway, passageway or sitting area of vertical posts or pillars that usually support cross-beams and a sturdy open lattice, often upon which woody vines are trained...
s, fence
Fence
A fence is a freestanding structure designed to restrict or prevent movement across a boundary. It is generally distinguished from a wall by the lightness of its construction: a wall is usually restricted to such barriers made from solid brick or concrete, blocking vision as well as passage .Fences...
s, etc. Climbers can be grown over other plants to provide additional attraction. Artificial support can also be provided. Some climbers climb by themselves; others need work, such as tying them in and training them.


Some types of vines