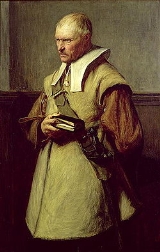 Encyclopedia
"Roundhead" was the nickname
Nickname
A nickname is "a usually familiar or humorous but sometimes pointed or cruel name given to a person or place, as a supposedly appropriate replacement for or addition to the proper name.", or a name similar in origin and pronunciation from the original name....
given to the supporters of the Parliament
Parliament of England
The Parliament of England was the legislature of the Kingdom of England. In 1066, William of Normandy introduced a feudal system, by which he sought the advice of a council of tenants-in-chief and ecclesiastics before making laws...
during the English Civil War
English Civil War
The English Civil War was a series of armed conflicts and political machinations between Parliamentarians and Royalists...
. Also known as Parliamentarians, they fought against King Charles I
Charles I of England
Charles I was King of England, King of Scotland, and King of Ireland from 27 March 1625 until his execution in 1649. Charles engaged in a struggle for power with the Parliament of England, attempting to obtain royal revenue whilst Parliament sought to curb his Royal prerogative which Charles...
and his supporters, the Cavaliers (Royalists), who claimed absolute power
Absolute monarchy
Absolute monarchy is a monarchical form of government in which the monarch exercises ultimate governing authority as head of state and head of government, his or her power not being limited by a constitution or by the law. An absolute monarch thus wields unrestricted political power over the...
and the divine right of kings
Divine Right of Kings
The divine right of kings or divine-right theory of kingship is a political and religious doctrine of royal and political legitimacy. It asserts that a monarch is subject to no earthly authority, deriving his right to rule directly from the will of God...
. The goal of the Roundhead party was to give the Parliament supreme control over executive administration.

Most roundheads appear to have sought a constitutional monarchy, in place of the absolutist monarchy sought by Charles I. However, at the end of the Second Civil War
Second English Civil War
The Second English Civil War was the second of three wars known as the English Civil War which refers to the series of armed conflicts and political machinations which took place between Parliamentarians and Royalists from 1642 until 1652 and also include the First English Civil War and the...
in 1649, public antipathy towards the king was high enough to allow republican roundhead leaders such as Oliver Cromwell
Oliver Cromwell
Oliver Cromwell was an English military and political leader who overthrew the English monarchy and temporarily turned England into a republican Commonwealth, and served as Lord Protector of England, Scotland, and Ireland....
to abolish the monarchy completely and establish the republican Commonwealth
Commonwealth of England
The Commonwealth of England was the republic which ruled first England, and then Ireland and Scotland from 1649 to 1660. Between 1653–1659 it was known as the Commonwealth of England, Scotland and Ireland...
. The roundhead commander-in-chief of the first Civil War, Lord Fairfax
Thomas Fairfax, 3rd Lord Fairfax of Cameron
Thomas Fairfax, 3rd Lord Fairfax of Cameron was a general and parliamentary commander-in-chief during the English Civil War...
, remained a supporter of constitutional monarchy, as did many other roundhead leaders such as Edward Montagu
Edward Montagu, 2nd Earl of Manchester
Edward Montagu, 2nd Earl of Manchester KG, KB, FRS was an important commander of Parliamentary forces in the First English Civil War, and for a time Oliver Cromwell's superior.-Life:...
.

England's many Puritan
Puritan
The Puritans were a significant grouping of English Protestants in the 16th and 17th centuries. Puritanism in this sense was founded by some Marian exiles from the clergy shortly after the accession of Elizabeth I of England in 1558, as an activist movement within the Church of England...
s and Presbyterian
Presbyterianism
Presbyterianism refers to a number of Christian churches adhering to the Calvinist theological tradition within Protestantism, which are organized according to a characteristic Presbyterian polity. Presbyterian theology typically emphasizes the sovereignty of God, the authority of the Scriptures,...
s were almost invariably roundhead supporters, as were many smaller religious groups such as the Independents
Independent (religion)
In English church history, Independents advocated local congregational control of religious and church matters, without any wider geographical hierarchy, either ecclesiastical or political...
. However many roundheads were Church of England
Church of England
The Church of England is the officially established Christian church in England and the Mother Church of the worldwide Anglican Communion. The church considers itself within the tradition of Western Christianity and dates its formal establishment principally to the mission to England by St...
, as were many cavaliers.

Roundhead political factions included Diggers, Levellers
Levellers
The Levellers were a political movement during the English Civil Wars which emphasised popular sovereignty, extended suffrage, equality before the law, and religious tolerance, all of which were expressed in the manifesto "Agreement of the People". They came to prominence at the end of the First...
and Fifth Monarchists
Fifth Monarchists
The Fifth Monarchists or Fifth Monarchy Men were active from 1649 to 1661 during the Interregnum, following the English Civil Wars of the 17th century. They took their name from a prophecy in the Book of Daniel that four ancient monarchies would precede Christ's return...
.

Some of the Puritan
Puritan
The Puritans were a significant grouping of English Protestants in the 16th and 17th centuries. Puritanism in this sense was founded by some Marian exiles from the clergy shortly after the accession of Elizabeth I of England in 1558, as an activist movement within the Church of England...
s, but by no means all, wore their hair closely cropped round the head, and there was thus an obvious contrast between them and the men of courtly fashion with their long ringlet
Ringlet (haircut)
A ringlet is a type of hairstyle. It is achieved by wrapping a lock of hair around the length of a thin curling iron or can be sported naturally by people with sufficiently tightly curled hair...
s.

During the war and for a time afterwards Roundhead was a term of derision — in the New Model Army
New Model Army
The New Model Army of England was formed in 1645 by the Parliamentarians in the English Civil War, and was disbanded in 1660 after the Restoration...
it was a punishable offence to call a fellow soldier a Roundhead. This contrasted with the term Cavalier to describe supporters of the Royalist cause. Cavalier also started out as a pejorative term—the first proponents used it to compare members of the Royalist party with Spanish Caballeros who had abused Dutch Protestants during the reign of Elizabeth I — but unlike Roundhead, Cavalier was embraced by those who were the target of the epithet and used by them to describe themselves.

Roundheads appears to have been first used as a term of derision toward the end of 1641, when the debates in Parliament in the Bishops Exclusion Bill were causing riots at Westminster
Westminster
Westminster is an area of central London, within the City of Westminster, England. It lies on the north bank of the River Thames, southwest of the City of London and southwest of Charing Cross...
. One authority said of the crowd which gathered there, "They had the hair of their heads very few of them longer than their ears, whereupon it came to pass that those who usually with their cries attended at Westminster were by a nickname called Roundheads". The demonstrators included London apprentices and Roundhead was a term of derision for them because the regulations to which they had agreed included a provision for closely cropped hair.

According to John Rushworth
John Rushworth
John Rushworth , English historian, was born at Acklington Park in the parish of Warkworth, Northumberland, England. He compiled a series of works called Historical Collections , concerning the period of history covering the English Civil Wars throughout the 17th century.-Background:John Rushworth...
the word was first used on 27 December 1641 by a disbanded officer named David Hide, who during a riot is reported to have drawn his sword and said he would "cut the throat of those round-headed dogs that bawled against bishops".

However, Richard Baxter
Richard Baxter
Richard Baxter was an English Puritan church leader, poet, hymn-writer, theologian, and controversialist. Dean Stanley called him "the chief of English Protestant Schoolmen". After some false starts, he made his reputation by his ministry at Kidderminster, and at around the same time began a long...
ascribes the origin of the term to a remark made by Queen Henrietta Maria
Henrietta Maria of France
Henrietta Maria of France ; was the Queen consort of England, Scotland and Ireland as the wife of King Charles I...
at the trial of the Earl of Strafford
Thomas Wentworth, 1st Earl of Strafford
Thomas Wentworth, 1st Earl of Strafford was an English statesman and a major figure in the period leading up to the English Civil War. He served in Parliament and was a supporter of King Charles I. From 1632 to 1639 he instituted a harsh rule as Lord Deputy of Ireland...
earlier that year; referring to John Pym
John Pym
John Pym was an English parliamentarian, leader of the Long Parliament and a prominent critic of James I and then Charles I.- Early life and education :...
, she asked who the roundheaded man was.

The principal advisor to Charles II
Charles II of England
Charles II was monarch of the three kingdoms of England, Scotland, and Ireland.Charles II's father, King Charles I, was executed at Whitehall on 30 January 1649, at the climax of the English Civil War...
, the Earl of Clarendon
Edward Hyde, 1st Earl of Clarendon
Edward Hyde, 1st Earl of Clarendon was an English historian and statesman, and grandfather of two English monarchs, Mary II and Queen Anne.-Early life:...
remarked on the matter, "and from those contestations the two terms of Roundhead and Cavalier grew to be received in discourse, ... they who were looked upon as servants to the king being then called Cavaliers, and the other of the rabble contemned and despised under the name of Roundheads."

Ironically, after Anglican Archbishop Laud made a statute in 1636 instructing all clergy to wear short hair, many Puritans rebelled to show their contempt for his authority and began to grow their hair even longer (as can be seen on their portraits) though they continued to be known as Roundheads. The longer hair was more common among the "Independent" and "high ranking" Puritans (which included Cromwell), especially toward the end of the Protectorate, while the "Presbyterian" (i.e. non-Independent) faction, and the military rank-and-file, continued to abhor long hair. By the end of this period some Independent Puritans were again derisively using the term Roundhead to refer to the Presbyterian Puritans.

Roundhead remained in use to describe those with republic
Republic
A republic is a form of government in which the people, or some significant portion of them, have supreme control over the government and where offices of state are elected or chosen by elected people. In modern times, a common simplified definition of a republic is a government where the head of...
an tendencies up until the Exclusion Bill
Exclusion Bill
The Exclusion Crisis ran from 1678 through 1681 in the reign of Charles II of England. The Exclusion Bill sought to exclude the king's brother and heir presumptive, James, Duke of York, from the thrones of England, Scotland and Ireland because he was Roman Catholic...
crisis of 1678–1681; the term was then superseded by Whig, initially another term with pejorative connotations. Likewise during Exclusion Bill crisis, the term Cavalier was replaced with Tory
Tory
Toryism is a traditionalist and conservative political philosophy which grew out of the Cavalier faction in the Wars of the Three Kingdoms. It is a prominent ideology in the politics of the United Kingdom, but also features in parts of The Commonwealth, particularly in Canada...
, a term introduced by the opponents of the Tories, and also initially a pejorative term.
The source of this article is wikipedia, the free encyclopedia.  The text of this article is licensed under the GFDL.