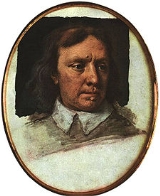 Overview
Oliver Cromwell was an English military
Military history of the United Kingdom
The military history of the United Kingdom covers the period from the creation of the united Kingdom of Great Britain in 1707, with the political union of England and Scotland, to the present day....
and political
Politics of England
The Politics of England forms the major part of the wider politics of the United Kingdom, with England being more populus than all the other countries of the United Kingdom put together. As England is also the largest in terms of area and GDP, its relationship to the UK is somewhat different from...
leader who overthrew the English monarchy and temporarily turned England into a republican Commonwealth
Commonwealth of England
The Commonwealth of England was the republic which ruled first England, and then Ireland and Scotland from 1649 to 1660. Between 1653–1659 it was known as the Commonwealth of England, Scotland and Ireland...
, and served as Lord Protector
Lord Protector
Lord Protector is a title used in British constitutional law for certain heads of state at different periods of history. It is also a particular title for the British Heads of State in respect to the established church...
of England, Scotland, and Ireland.

Cromwell was born into the ranks of the middle gentry
Gentry
Gentry denotes "well-born and well-bred people" of high social class, especially in the past....
, and remained relatively obscure for the first 40 years of his life.

How did Cromwell effect Ireland?
More

1661    Oliver Cromwell, Lord Protector of the Commonwealth of England is ritually executed two years after his death, on the anniversary of the execution of the monarch he himself deposed.

I had rather have a plain, russet-coated Captain, that knows what he fights for, and loves what he knows, than that you call a Gentleman and is nothing else.

A few honest men are better than numbers.

The State, in choosing men to serve it, takes no notice of their opinions. If they be willing faithfully to serve it, that satisfies.

God made them as stubble to our swords.

Truly England and the church of God hath had a great favour from the Lord, in this great victory given us.

We study the glory of God, and the honour and liberty of parliament, for which we unanimously fight, without seeking our own interests... I profess I could never satisfy myself on the justness of this war, but from the authority of the parliament to maintain itself in its rights; and in this cause I hope to prove myself an honest man and single-hearted.

I could not riding out alone about my business, but smile out to God in praises, in assurance of victory because God would, by things that are not, bring to naught things that are.

This is our comfort, God is in heaven, and He doth what pleaseth Him; His, and only His counsel shall stand, whatsoever the designs of men, and the fury of the people be.