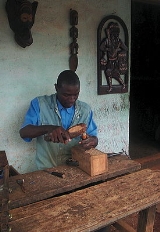 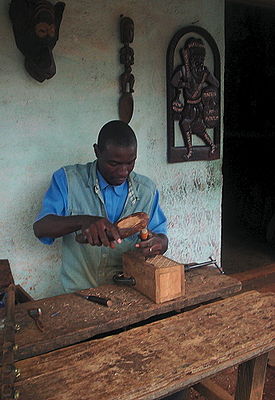 An artisan is a skilled manual
Manual labour
Manual labour , manual or manual work is physical work done by people, most especially in contrast to that done by machines, and also to that done by working animals...
worker who makes items that may be functional or strictly decorative, including furniture, clothing, jewellery, household items, and tools. As an adjective (spelled "artisanal"), it has been used as a marketing
Marketing
Marketing is the process used to determine what products or services may be of interest to customers, and the strategy to use in sales, communications and business development. It generates the strategy that underlies sales techniques, business communication, and business developments...
buzz word to describe or imply an association with the craft
Craft
A craft is a branch of a profession that requires some particular kind of skilled work. In historical sense, particularly as pertinent to the Medieval history and earlier, the term is usually applied towards people occupied in small-scale production of goods.-Development from the past until...
ing of hand made food products, such as bread
Bread
Bread is a staple food prepared by cooking a dough of flour and water and often additional ingredients. Doughs are usually baked, but in some cuisines breads are steamed , fried , or baked on an unoiled frying pan . It may be leavened or unleavened...
, tofu
Tofu
is a food made by coagulating soy milk and then pressing the resulting curds into soft white blocks. It is part of East Asian and Southeast Asian cuisine such as Chinese, Japanese, Korean, Indonesian, Vietnamese, and others. There are many different varieties of tofu, including fresh tofu and tofu...
, beverages and cheese.

Artisans were the dominant producers of consumer products prior to the Industrial Revolution
Industrial Revolution
The Industrial Revolution was a period from the 18th to the 19th century where major changes in agriculture, manufacturing, mining, transportation, and technology had a profound effect on the social, economic and cultural conditions of the times...
. According to classical economics
Classical economics
Classical economics is widely regarded as the first modern school of economic thought. Its major developers include Adam Smith, Jean-Baptiste Say, David Ricardo, Thomas Malthus and John Stuart Mill....
theory, the division of labour occurs with internal market development (Adam Smith
Adam Smith
Adam Smith was a Scottish social philosopher and a pioneer of political economy. One of the key figures of the Scottish Enlightenment, Smith is the author of The Theory of Moral Sentiments and An Inquiry into the Nature and Causes of the Wealth of Nations...
). However, according to economist John Hicks
John Hicks
Sir John Richard Hicks was a British economist and one of the most important and influential economists of the twentieth century. The most familiar of his many contributions in the field of economics were his statement of consumer demand theory in microeconomics, and the IS/LM model , which...
, merchants and artisans originated as servants to the ruler
Ruler
A ruler, sometimes called a rule or line gauge, is an instrument used in geometry, technical drawing, printing and engineering/building to measure distances and/or to rule straight lines...
s, which occurred much earlier.

During the Middle Ages
Middle Ages
The Middle Ages is a periodization of European history from the 5th century to the 15th century. The Middle Ages follows the fall of the Western Roman Empire in 476 and precedes the Early Modern Era. It is the middle period of a three-period division of Western history: Classic, Medieval and Modern...
, the term "artisan" was applied to those who made things or provided services. It did not apply to unskilled labourers. Artisans were divided into two distinct groups: those who operated their own business, and those who did not. Those who owned their businesses were called masters, while the latter were the journeymen and apprentices. One misunderstanding many people have about this social group is that they picture them as "workers" in the modern sense: employed by someone. The most influential group among the artisans were the masters, the business owners. The owners enjoyed a higher social status in their communities.