Encyclopedia
In geotechnical engineering
Geotechnical engineering
Geotechnical engineering is the branch of civil engineering concerned with the engineering behavior of earth materials. Geotechnical engineering is important in civil engineering, but is also used by military, mining, petroleum, or any other engineering concerned with construction on or in the ground...
, a caisson is a retaining, watertight structure used, for example, to work on the foundations
Foundation (architecture)
A foundation is the lowest and supporting layer of a structure. Foundations are generally divided into two categories: shallow foundations and deep foundations.-Shallow foundations:...
of a bridge
Bridge
A bridge is a structure built to span physical obstacles such as a body of water, valley, or road, for the purpose of providing passage over the obstacle...
pier
Pier (architecture)
In architecture, a pier is an upright support for a superstructure, such as an arch or bridge. Sections of wall between openings function as piers. The simplest cross section of the pier is square, or rectangular, although other shapes are also common, such as the richly articulated piers of Donato...
, for the construction of a concrete dam
Dam
A dam is a barrier that impounds water or underground streams. Dams generally serve the primary purpose of retaining water, while other structures such as floodgates or levees are used to manage or prevent water flow into specific land regions. Hydropower and pumped-storage hydroelectricity are...
, or for the repair of ship
Ship
Since the end of the age of sail a ship has been any large buoyant marine vessel. Ships are generally distinguished from boats based on size and cargo or passenger capacity. Ships are used on lakes, seas, and rivers for a variety of activities, such as the transport of people or goods, fishing,...
s. These are constructed such that the water can be pumped out, keeping the working environment dry. When piers are to be built using an open caisson and it is not practical to reach suitable soil, friction pilings may be driven to form a suitable sub-foundation. These piles are connected by a foundation pad upon which the column pier is erected. 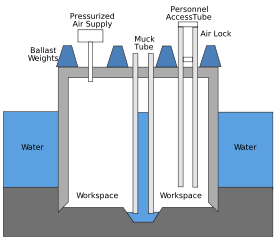 Shallow caissons may be open to the air, whereas pneumatic caissons, which penetrate soft mud
Mud
Mud is a mixture of water and some combination of soil, silt, and clay. Ancient mud deposits harden over geological time to form sedimentary rock such as shale or mudstone . When geological deposits of mud are formed in estuaries the resultant layers are termed bay muds...
, are sealed at the top and filled with compressed air to keep water and mud out at depth. An airlock
Airlock
An airlock is a device which permits the passage of people and objects between a pressure vessel and its surroundings while minimizing the change of pressure in the vessel and loss of air from it...
allows access to the chamber. Workers move mud and rock debris (called muck) from the edge of the workspace to a water-filled pit, connected by a tube (called the muck tube) to the surface. A crane
Crane (machine)
A crane is a type of machine, generally equipped with a hoist, wire ropes or chains, and sheaves, that can be used both to lift and lower materials and to move them horizontally. It uses one or more simple machines to create mechanical advantage and thus move loads beyond the normal capability of...
at the surface removes the soil with a clamshell bucket. The water pressure in the tube balances the air pressure, with excess air escaping up the muck tube. The pressurized air flow must be constant to ensure regular air changes for the workers and prevent excessive inflow of mud or water at the base of the caisson.

The caisson will be brought down through soft mud until a suitable foundation material is encountered. While bedrock
Bedrock
In stratigraphy, bedrock is the native consolidated rock underlying the surface of a terrestrial planet, usually the Earth. Above the bedrock is usually an area of broken and weathered unconsolidated rock in the basal subsoil...
is preferred, a stable, hard mud is sometimes used when bedrock is too deep.

Caisson disease is so named since it appeared in construction workers when they left the compressed atmosphere of the caisson and rapidly reentered normal (decompressed) atmospheric conditions. It is caused by the same processes as decompression sickness
Decompression sickness
Decompression sickness describes a condition arising from dissolved gases coming out of solution into bubbles inside the body on depressurization...
in divers
Underwater diving
Underwater diving is the practice of going underwater, either with breathing apparatus or by breath-holding .Recreational diving is a popular activity...
. Construction of the Brooklyn Bridge
Brooklyn Bridge
The Brooklyn Bridge is one of the oldest suspension bridges in the United States. Completed in 1883, it connects the New York City boroughs of Manhattan and Brooklyn by spanning the East River...
, which was built with the help of caissons, resulted in numerous workers being either killed or permanently injured by caisson disease during its construction, including the designer's son and Chief Engineer of the project, Washington Roebling
Washington Roebling
Washington Augustus Roebling was an American civil engineer best known for his work on the Brooklyn Bridge, which was initially designed by his father John A. Roebling.-Education and military service:...
.

Caissons have also been used in the installation of hydraulic elevator
Elevator
An elevator is a type of vertical transport equipment that efficiently moves people or goods between floors of a building, vessel or other structures...
s where a single-stage ram is installed below the ground level.

Box caissons are prefabricated concrete boxes with sides and bottom and are set down on prepared bases. Once in place they will be filled with concrete to become part of the permanent works, for example the foundation for a bridge pier. One problem with box caissons is that hollow concrete structures float (see WWII concrete ships
Concrete ship
Concrete ships are ships built of steel and ferrocement instead of more traditional materials, such as steel or wood. The advantage of ferrocement construction is that materials are cheap and readily available, while the disadvantages are that construction labor costs are high, as are operating...
) and so they must be ballasted or anchored to prevent this until they can be filled with concrete. Adjustable anchoring systems combined with a GPS survey allow engineers to position a box caisson with pinpoint accuracy. Elaborate anchoring systems may be required in tidal zones.

Open caissons are similar to box caissons except that they do not have a bottom face. They are suitable for use in soft clays (e.g. in some river-beds) but not for where there may be large obstructions in the ground. Open caissons used in soft grounds or high water tables, where open trench excavations are impractical, can also be used to install deep manholes, pump stations and reception/launch pits for micro tunnelling, pipe jacking and other operations. The open caissons may fill with water during sinking. The material is excavated by clamshell excavator bucket on crane. The caissons are sunk by self-weight, concrete or water ballast placed on top, or by hydraulic jacks. The leading edge of the caisson or "cutting shoe" is sloped out at a sharp angle (usually made of steel) to aid sinking in a vertical manner. The shoe is generally wider than the caisson to reduce friction and the leading edge may be supplied with pressurised bentonite slurry (it swells in water to stabilise settlement or fill depressions/voids). The formation level subsoil may still not be suitable for excavation or bearing capacity
Bearing capacity
In geotechnical engineering, bearing capacity is the capacity of soil to support the loads applied to the ground. The bearing capacity of soil is the maximum average contact pressure between the foundation and the soil which should not produce shear failure in the soil...
. The water in the caisson (due to high water table) balances the upthrust forces of the soft soils underneath. If dewatered, the base may "pipe" or "boil" and the caisson sink. To combat this problem piles may be driven from the surface. H-beam sections (typical column sections, due to resistance to bending in all axes) may be driven at angles "raked" to rock or other firmer soils. The H-beams are left extended above the base. A reinforced concrete plug is poured under the water known as a "tremie pour". This will act as a pile cap and resist the upward forces of subsoil once dewatered. The piles will act as bearing (transmitting load to deeper soils or friction along their surface length) and anchorage (resist floatation in the same manner).

Compressed-air caissons have the advantage of providing dry working conditions which are better for placing concrete. They are also well suited for foundations for which other methods might cause settlement of adjacent structures.

Monoliths are, as their name suggests, larger than the other types but are similar to open caissons. They are often found in quay walls where resistance to impact from ships is required.

The word caisson is also used as a synonym
Synonym
Synonyms are different words with almost identical or similar meanings. Words that are synonyms are said to be synonymous, and the state of being a synonym is called synonymy. The word comes from Ancient Greek syn and onoma . The words car and automobile are synonyms...
for the water-filled trough part of caisson lock
Caisson lock
A caisson lock is a type of canal lock in which a narrowboat is enclosed in a sealed box and raised or lowered between two water levels. It was intended primarily as a water-saving measure, but also to save construction costs when compared with other engineering solutions. It was capable of...
s, canal lifts
Boat lift
A boat lift, ship lift, or lift lock is a machine for transporting boats between water at two different elevations, and is an alternative to the canal lock and the canal inclined plane....
and inclines
Canal inclined plane
An inclined plane is a system used on some canals for raising boats between different water levels. Boats may be conveyed afloat, in caissons, or may be carried in cradles or slings. It can be considered as a specialised type of cable railway....
in which boats and ships rest whilst being lifted from one canal
Canal
Canals are man-made channels for water. There are two types of canal:#Waterways: navigable transportation canals used for carrying ships and boats shipping goods and conveying people, further subdivided into two kinds:...
elevation to another. This is the opposite of the caissons mentioned earlier; the water is retained on the inside of the caisson, not excluded from the caisson.