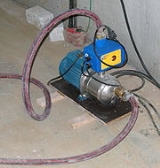 Overview
A pump is a device used to move fluids, such as liquid
Liquid
Liquid is one of the three classical states of matter . Like a gas, a liquid is able to flow and take the shape of a container. Some liquids resist compression, while others can be compressed. Unlike a gas, a liquid does not disperse to fill every space of a container, and maintains a fairly...
s, gas
Gas
Gas is one of the three classical states of matter . Near absolute zero, a substance exists as a solid. As heat is added to this substance it melts into a liquid at its melting point , boils into a gas at its boiling point, and if heated high enough would enter a plasma state in which the electrons...
es or slurries
Slurry
A slurry is, in general, a thick suspension of solids in a liquid.-Examples of slurries:Examples of slurries include:* Lahars* A mixture of water and cement to form concrete* A mixture of water, gelling agent, and oxidizers used as an explosive...
.

A pump displaces a volume by physical or mechanical action. Pumps fall into three major groups: direct lift, displacement, and gravity pumps. Their names describe the method for moving a fluid.
A positive displacement pump causes a fluid to move trapping a fixed amount of it then forcing (displacing) that trapped volume into the discharge pipe.

We have six electric motor driven pumps, each of 12.5 MGD capacity,installed in 1976. These pumps are used as a bulk raw water supply source. U...

What r the different types of pumps used in the textile industry? explain with applications in different departments of textile units.

what are the special types of pumps?
More