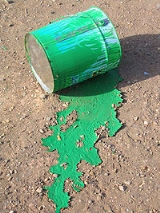 Overview
Paint is any liquid
Liquid
Liquid is one of the three classical states of matter . Like a gas, a liquid is able to flow and take the shape of a container. Some liquids resist compression, while others can be compressed. Unlike a gas, a liquid does not disperse to fill every space of a container, and maintains a fairly...
, liquefiable, or mastic
Mastic (disambiguation)
Mastic can refer to:*Mastic , a resin obtained from Pistacia lentiscus Var. Chia *False Mastic , a tree native to Florida, the Caribbean, and Central America...
composition which after application to a substrate in a thin layer is converted to an opaque
Opacity (optics)
Opacity is the measure of impenetrability to electromagnetic or other kinds of radiation, especially visible light. In radiative transfer, it describes the absorption and scattering of radiation in a medium, such as a plasma, dielectric, shielding material, glass, etc...
solid
Solid
Solid is one of the three classical states of matter . It is characterized by structural rigidity and resistance to changes of shape or volume. Unlike a liquid, a solid object does not flow to take on the shape of its container, nor does it expand to fill the entire volume available to it like a...
film. One may also consider the digital mimicry thereof. It is most commonly used to protect, color or provide texture to objects.
In 2011, South African archeologists reported finding a 100,000 year old human-made ochre
Ochre
Ochre is the term for both a golden-yellow or light yellow brown color and for a form of earth pigment which produces the color. The pigment can also be used to create a reddish tint known as "red ochre". The more rarely used terms "purple ochre" and "brown ochre" also exist for variant hues...
-based mixture which may have been used like paint.
Cave paintings drawn with red or yellow ochre, hematite
Hematite
Hematite, also spelled as haematite, is the mineral form of iron oxide , one of several iron oxides. Hematite crystallizes in the rhombohedral system, and it has the same crystal structure as ilmenite and corundum...
, manganese oxide
Manganese oxide
Manganese oxide is a generic term used to describe a variety of manganese oxides and hydroxides. It may refer to:* Manganese oxide, MnO* Manganese oxide, Mn3O4* Manganese oxide, Mn2O3* Manganese dioxide, , MnO2...
, and charcoal
Charcoal
Charcoal is the dark grey residue consisting of carbon, and any remaining ash, obtained by removing water and other volatile constituents from animal and vegetation substances. Charcoal is usually produced by slow pyrolysis, the heating of wood or other substances in the absence of oxygen...
may have been made by early Homo sapiens as long as 40,000 years ago.

Ancient colored walls at Dendera
Dendera
Dendera is a small town in Egypt situated on the west bank of the Nile, about 5 km south of Qena, on the opposite side of the river.-History:...
, Egypt
Egypt
Egypt , officially the Arab Republic of Egypt, Arabic: , is a country mainly in North Africa, with the Sinai Peninsula forming a land bridge in Southwest Asia. Egypt is thus a transcontinental country, and a major power in Africa, the Mediterranean Basin, the Middle East and the Muslim world...
, which were exposed for years to the elements, still possess their brilliant color, as vivid as when they were painted about 2,000 years ago.

What is the chemical formula for paint?
More
x