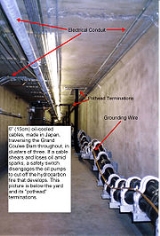 Overview
A cable is two or more wire
Wire
A wire is a single, usually cylindrical, flexible strand or rod of metal. Wires are used to bear mechanical loads and to carry electricity and telecommunications signals. Wire is commonly formed by drawing the metal through a hole in a die or draw plate. Standard sizes are determined by various...
s running side by side and bonded, twisted or braided together to form a single assembly. In mechanics
Mechanics
Mechanics is the branch of physics concerned with the behavior of physical bodies when subjected to forces or displacements, and the subsequent effects of the bodies on their environment....
cables, otherwise known as wire rope
Wire rope
thumb|Steel wire rope Wire rope is a type of rope which consists of several strands of metal wire laid into a helix. Initially wrought iron wires were used, but today steel is the main material used for wire ropes....
s, are used for lifting, hauling and towing or conveying force through tension. In electrical engineering
Electrical engineering
Electrical engineering is a field of engineering that generally deals with the study and application of electricity, electronics and electromagnetism. The field first became an identifiable occupation in the late nineteenth century after commercialization of the electric telegraph and electrical...
cables are used to carry electric current
Electric current
Electric current is a flow of electric charge through a medium.This charge is typically carried by moving electrons in a conductor such as wire...
s. An optical cable contains one or more optical fiber
Optical fiber
An optical fiber is a flexible, transparent fiber made of a pure glass not much wider than a human hair. It functions as a waveguide, or "light pipe", to transmit light between the two ends of the fiber. The field of applied science and engineering concerned with the design and application of...
s in a protective jacket that supports the fibers.