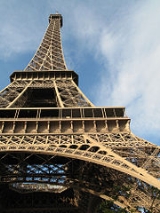 Overview
Wrought iron is an iron
Iron
Iron is a chemical element with the symbol Fe and atomic number 26. It is a metal in the first transition series. It is the most common element forming the planet Earth as a whole, forming much of Earth's outer and inner core. It is the fourth most common element in the Earth's crust...
alloy
Alloy
An alloy is a mixture or metallic solid solution composed of two or more elements. Complete solid solution alloys give single solid phase microstructure, while partial solutions give two or more phases that may or may not be homogeneous in distribution, depending on thermal history...
with a very low carbon
Carbon
Carbon is the chemical element with symbol C and atomic number 6. As a member of group 14 on the periodic table, it is nonmetallic and tetravalent—making four electrons available to form covalent chemical bonds...

content, in comparison to steel
Steel
Steel is an alloy that consists mostly of iron and has a carbon content between 0.2% and 2.1% by weight, depending on the grade. Carbon is the most common alloying material for iron, but various other alloying elements are used, such as manganese, chromium, vanadium, and tungsten...
, and has fibrous inclusions
Inclusion (mineral)
In mineralogy, an inclusion is any material that is trapped inside a mineral during its formation.In gemology, an inclusion is a characteristic enclosed within a gemstone, or reaching its surface from the interior....
, known as slag
Slag
Slag is a partially vitreous by-product of smelting ore to separate the metal fraction from the unwanted fraction. It can usually be considered to be a mixture of metal oxides and silicon dioxide. However, slags can contain metal sulfides and metal atoms in the elemental form...
. This is what gives it a "grain" resembling wood, which is visible when it is etched or bent to the point of failure. Wrought iron is tough, malleable, ductile and easily welded
Welding
Welding is a fabrication or sculptural process that joins materials, usually metals or thermoplastics, by causing coalescence. This is often done by melting the workpieces and adding a filler material to form a pool of molten material that cools to become a strong joint, with pressure sometimes...
. Historically, it was known as "commercially pure iron"; however, it no longer qualifies because current standards for commercially pure iron require a carbon content of less than 0.008 wt%.

Before the development of effective methods of steelmaking
Steelmaking
Steelmaking is the second step in producing steel from iron ore. In this stage, impurities such as sulfur, phosphorus, and excess carbon are removed from the raw iron, and alloying elements such as manganese, nickel, chromium and vanadium are added to produce the exact steel required.-Older...
and the availability of large quantities of steel, wrought iron was the most common form of malleable iron.

Give the reason why sulfur, iron oxide and phosphorous are regarded as injurious elements in steel?

What is the decorative return on a wrought iron handrail called?

Give the reason why sulfur, iron oxide and phosphorous are regarded as injurious elements in steel?
More
x