Encyclopedia
Firs are a genus of 48–55 species of evergreen
Evergreen
In botany, an evergreen plant is a plant that has leaves in all seasons. This contrasts with deciduous plants, which completely lose their foliage during the winter or dry season.There are many different kinds of evergreen plants, both trees and shrubs...
conifers
Pinophyta
The conifers, division Pinophyta, also known as division Coniferophyta or Coniferae, are one of 13 or 14 division level taxa within the Kingdom Plantae. Pinophytes are gymnosperms. They are cone-bearing seed plants with vascular tissue; all extant conifers are woody plants, the great majority being...
in the family Pinaceae
Pinaceae
Pinaceae are trees or shrubs, including many of the well-known conifers of commercial importance such as cedars, firs, hemlocks, larches, pines and spruces. The family is included in the order Pinales, formerly known as Coniferales. Pinaceae are supported as monophyletic by its protein-type sieve...
. They are found through much of North and Central America, Europe, Asia, and North Africa, occurring in mountain
Mountain
Image:Himalaya_annotated.jpg|thumb|right|The Himalayan mountain range with Mount Everestrect 58 14 160 49 Chomo Lonzorect 200 28 335 52 Makalurect 378 24 566 45 Mount Everestrect 188 581 920 656 Tibetan Plateaurect 250 406 340 427 Rong River...
s over most of the range. Firs are most closely related to the cedars (Cedrus); Douglas-firs are not true firs, being of the genus Pseudotsuga.

All are tree
Tree
A tree is a perennial woody plant. It is most often defined as a woody plant that has many secondary branches supported clear of the ground on a single main stem or trunk with clear apical dominance. A minimum height specification at maturity is cited by some authors, varying from 3 m to...
s, reaching heights of 10–80 m (30–260 ft) tall and trunk diameters of 0.5–4 m (2–12 ft) when mature. Firs can be distinguished from other members of the pine family by their needle-like leaves
Leaf
A leaf is an organ of a vascular plant, as defined in botanical terms, and in particular in plant morphology. Foliage is a mass noun that refers to leaves as a feature of plants....
, attached to the twig by a base that resembles a small suction cup; and by erect, cylindrical cones
Conifer cone
A cone is an organ on plants in the division Pinophyta that contains the reproductive structures. The familiar woody cone is the female cone, which produces seeds. The male cones, which produce pollen, are usually herbaceous and much less conspicuous even at full maturity...
5–25 cm (2–10 in) long that disintegrate at maturity to release the winged seed
Seed
A seed is a small embryonic plant enclosed in a covering called the seed coat, usually with some stored food. It is the product of the ripened ovule of gymnosperm and angiosperm plants which occurs after fertilization and some growth within the mother plant...
s. Identification of the species is based on the size and arrangement of the leaves, the size and shape of the cones, and whether the bract scales of the cones are long and exserted, or short and hidden inside the cone. 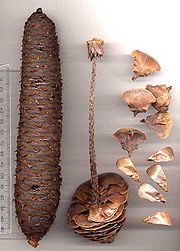 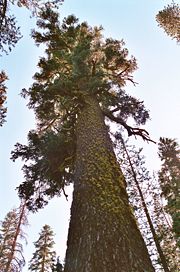 The wood
Wood
Wood is a hard, fibrous tissue found in many trees. It has been used for hundreds of thousands of years for both fuel and as a construction material. It is an organic material, a natural composite of cellulose fibers embedded in a matrix of lignin which resists compression...
of most firs is considered unsuitable for general timber
Timber
Timber may refer to:* Timber, a term common in the United Kingdom and Australia for wood materials * Timber, Oregon, an unincorporated community in the U.S...
use, and is often used as pulp or for the manufacture of plywood
Plywood
Plywood is a type of manufactured timber made from thin sheets of wood veneer. It is one of the most widely used wood products. It is flexible, inexpensive, workable, re-usable, and can usually be locally manufactured...
and rough timber. Because this genus has no insect or decay resistance qualities after logging, it is generally recommended for construction purposes as indoor use only (e.g. indoor drywall framing). This wood left outside can not be expected to last more than 12–18 months depending on the type of climate it is exposed to. It is commonly referred to as several different names which include North American timber, SPF (spruce, pine, fir) and whitewood.

Nordmann Fir
Nordmann Fir
Nordmann Fir is a fir native to the mountains south and east of the Black Sea, in Turkey, Georgia, Russian Caucasus and northern parts of Armenia. It occurs at altitudes of 900-2,200 m on mountains with a rainfall of over 1,000 mm.It is a large evergreen coniferous tree growing to 60 m tall...
, Noble Fir
Noble Fir
Abies procera, the Noble Fir, is a western North American fir, native to the Cascade Range and Coast Range mountains of extreme northwest California and western Oregon and Washington in the United States...
, Fraser Fir
Fraser Fir
Abies fraseri is a species of fir native to the mountains of the eastern United States. It is closely related to Abies balsamea , of which it has occasionally been treated as a subspecies or a variety Abies fraseri (Fraser fir) is a species of fir native to the mountains of the eastern United...
and Balsam Fir
Balsam Fir
The balsam fir is a North American fir, native to most of eastern and central Canada and the northeastern United States .-Growth:It is a small to medium-size evergreen tree typically tall, rarely to tall, with a narrow conic crown...
are very popular Christmas tree
Christmas tree
The Christmas tree is a decorated evergreen coniferous tree, real or artificial, and a tradition associated with the celebration of Christmas. The tradition of decorating an evergreen tree at Christmas started in Livonia and Germany in the 16th century...
s, generally considered to be the best trees for this purpose, with aromatic foliage that does not shed many needles on drying out. Many are also very decorative garden trees, notably Korean Fir
Korean Fir
Korean Fir is a fir native to the higher mountains of South Korea, including Jeju-do island...
and Fraser Fir, which produce brightly coloured cones even when very young, still only 1–2 m (3–6 ft) tall. Other fir trees can grow anywhere between 30 and 236 feet tall. Fir Tree Appreciation Day is June 18th.

Firs are used as food plants by the caterpillar
Caterpillar
Caterpillars are the larval form of members of the order Lepidoptera . They are mostly herbivorous in food habit, although some species are insectivorous. Caterpillars are voracious feeders and many of them are considered to be pests in agriculture...
s of some Lepidoptera
Lepidoptera
Lepidoptera is a large order of insects that includes moths and butterflies . It is one of the most widespread and widely recognizable insect orders in the world, encompassing moths and the three superfamilies of butterflies, skipper butterflies, and moth-butterflies...
species, including Chionodes abella
Chionodes
Chionodes is a genus of moths of the family Gelechiidae. Members of this group can be found in most parts of the world. Many species of this genus utilize Douglas-fir as a host plant for their larvae.-Species:Species in this genus include:...
(recorded on White Fir
White Fir
White Fir is a fir native to the mountains of western North America, occurring at altitudes of 900-3,400 m. It is a medium to large evergreen coniferous tree growing to 25–60 m tall and with a trunk diameter of up to 2 m . It is popular as an ornamental landscaping tree and as a Christmas Tree...
), Autumnal Moth
Autumnal Moth
The Autumnal Moth is a moth of the family Geometridae. It is found throughout the Palearctic region and the Near East and has a much wider distribution than its two close relatives...
, Conifer Swift
Korscheltellus
Korscheltellus is a genus of moths of the family Hepialidae. It consists of two widespread species, the familiar Common Swift of Europe and the Conifer Swift of Canada and the eastern United States. K...
(a pest of Balsam Fir
Balsam Fir
The balsam fir is a North American fir, native to most of eastern and central Canada and the northeastern United States .-Growth:It is a small to medium-size evergreen tree typically tall, rarely to tall, with a narrow conic crown...
), The Engrailed
Engrailed
The Engrailed and Small Engrailed are moths of the family Geometridae. They are distributed across most of Europe. There is an on-going debate as to whether they make up one species, or whether E. crepuscularia actually refers only to the Small Engrailed, with the Engrailed proper being separable...
, Grey Pug
Grey Pug
The Grey Pug is a moth of the family Geometridae. It is found throughout the Palearctic region and the Near East.The forewings of this species are grey marked with pale fascia and radial lines which give it a mottled appearance. The hindwings are much paler and plainer. Melanism is quite common in...
, Mottled Umber
Mottled Umber
The Mottled Umber is a moth of the family Geometridae. It is a common species throughout the Palearctic region and the Near East....
, Pine Beauty
Pine Beauty
The Pine Beauty is a moth of the family Noctuidae. It is a common species of pine woods in Europe.The forewings are typically rich orange brown, but sometimes are dark grey, with two large pale stigmata and fine streaks along the termen. The hindwings are brown or blackish. The wingspan is 32-40 mm...
and the tortrix moths Cydia illutana
Cydia illutana
Cydia illutana is a small moth of the family Tortricidae. It is found from Western and Central Europe , north to Scandinavia and east to Russia ....
(whose caterpillars are recorded to feed on European Silver Fir cone scales) and C. duplicana
Cydia duplicana
Cydia duplicana is a small moth of the family Tortricidae. It is found in all across Europe, extending barely into Asia in the Transcaucasus, Turkestan and Kazakhstan.The wingspan is 13–19 mm. Adults are on wing from May or June to the end of July...
(on European Silver Fir bark around injuries or canker
Canker
Canker and anthracnose are general terms for a large number of different plant diseases, characterised by broadly similar symptoms including the appearance of small areas of dead tissue, which grow slowly, often over a period of years. Some are of only minor consequence, but others are ultimately...
).

Abies webbiana or Talispatra is used in Ayurveda as an antitussive drug.