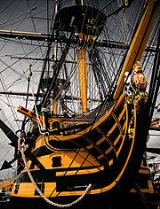 Overview
HMS Victory is a 104-gun first-rate
First-rate
First rate was the designation used by the Royal Navy for its largest ships of the line. While the size and establishment of guns and men changed over the 250 years that the rating system held sway, from the early years of the eighteenth century the first rates comprised those ships mounting 100...
ship of the line
Ship of the line
A ship of the line was a type of naval warship constructed from the 17th through the mid-19th century to take part in the naval tactic known as the line of battle, in which two columns of opposing warships would manoeuvre to bring the greatest weight of broadside guns to bear...
of the Royal Navy
Royal Navy
The Royal Navy is the naval warfare service branch of the British Armed Forces. Founded in the 16th century, it is the oldest service branch and is known as the Senior Service...
, laid down in 1759 and launched in 1765. She is most famous as Lord Nelson
Horatio Nelson, 1st Viscount Nelson
Horatio Nelson, 1st Viscount Nelson, 1st Duke of Bronté, KB was a flag officer famous for his service in the Royal Navy, particularly during the Napoleonic Wars. He was noted for his inspirational leadership and superb grasp of strategy and unconventional tactics, which resulted in a number of...
's flagship
Flagship
A flagship is a vessel used by the commanding officer of a group of naval ships, reflecting the custom of its commander, characteristically a flag officer, flying a distinguishing flag...
at the Battle of Trafalgar
Battle of Trafalgar
The Battle of Trafalgar was a sea battle fought between the British Royal Navy and the combined fleets of the French Navy and Spanish Navy, during the War of the Third Coalition of the Napoleonic Wars ....
in 1805.

She was also Keppel
Augustus Keppel, 1st Viscount Keppel
Admiral Augustus Keppel, 1st Viscount Keppel PC was an officer of the Royal Navy during the Seven Years' War and the War of American Independence...
's flagship at Ushant
Battle of Ushant (1778)
The Battle of Ushant took place on 27 July 1778, during the American War of Independence, fought between French and British fleets 100 miles west of Ushant, a French island at the mouth of the English Channel off the north-westernmost point of France...
, Howe's
Richard Howe, 1st Earl Howe
Admiral of the Fleet Richard Howe, 1st Earl Howe KG was a British naval officer, notable in particular for his service during the American War of Independence and French Revolutionary Wars. He was the brother of William Howe and George Howe.Howe joined the navy at the age of thirteen and served...
flagship at Cape Spartel
Battle of Cape Spartel
The Battle of Cape Spartel was an indecisive naval battle between a Franco-Spanish fleet under Admiral Luis de Córdova y Córdova and a British fleet under Admiral Richard Howe...
and Jervis
John Jervis, 1st Earl of St Vincent
Admiral of the Fleet John Jervis, 1st Earl of St Vincent GCB, PC was an admiral in the Royal Navy and Member of Parliament in the United Kingdom...
's flagship at Cape St Vincent
Battle of Cape St. Vincent (1797)
In the Battle of Cape St Vincent a British fleet under Admiral Sir John Jervis defeated a larger Spanish fleet under Admiral Don José de Córdoba near Cape St. Vincent, Portugal.-Origins:...
. After 1824 she served as a harbour ship.