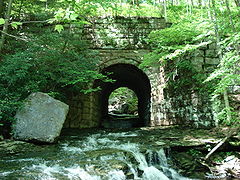 A culvert is a device used to channel water. It may be used to allow water to pass underneath a road
Road
A road is a thoroughfare, route, or way on land between two places, which typically has been paved or otherwise improved to allow travel by some conveyance, including a horse, cart, or motor vehicle. Roads consist of one, or sometimes two, roadways each with one or more lanes and also any...
, railway, or embankment
Embankment (transportation)
To keep a road or railway line straight or flat, and where the comparative cost or practicality of alternate solutions is prohibitive, the land over which the road or rail line will travel is built up to form an embankment. An embankment is therefore in some sense the opposite of a cutting, and...
. Culverts can be made of many different materials; steel
Steel
Steel is an alloy that consists mostly of iron and has a carbon content between 0.2% and 2.1% by weight, depending on the grade. Carbon is the most common alloying material for iron, but various other alloying elements are used, such as manganese, chromium, vanadium, and tungsten...
, polyvinyl chloride
Polyvinyl chloride
Polyvinyl chloride, commonly abbreviated PVC, is a thermoplastic polymer. It is a vinyl polymer constructed of repeating vinyl groups having one hydrogen replaced by chloride. Polyvinyl chloride is the third most widely produced plastic, after polyethylene and polypropylene. PVC is widely used in...
(PVC) and concrete
Concrete
Concrete is a composite construction material, composed of cement and other cementitious materials such as fly ash and slag cement, aggregate , water and chemical admixtures.The word concrete comes from the Latin word...
are the most common. Formerly, construction of stone culverts was common.

Culverts come in many shapes and sizes, including round, elliptical, flat-bottomed, pear-shaped, and box. They vary from the small drainage culverts found on highways and driveways to large diameter structures on significant waterways or supporting large water control works. The latter can comprise large engineering projects.

When boxes or pipes are placed side-by-side to create a width of greater than twenty feet, the culvert is defined as a bridge in the United States. This is a requirement of the federal bridge inspection standards and ensures that the culvert is inspected on a regular basis.

In the coastal plains of Queensland
Queensland
Queensland is a state of Australia, occupying the north-eastern section of the mainland continent. It is bordered by the Northern Territory, South Australia and New South Wales to the west, south-west and south respectively. To the east, Queensland is bordered by the Coral Sea and Pacific Ocean...
(North-East Australia), torrential rains during the wet season place a heavy demand on culverts. Further, the natural slope of the flood plains is often very small and little fall (or head loss
Hydraulic head
Hydraulic head or piezometric head is a specific measurement of water pressure above a geodetic datum. It is usually measured as a water surface elevation, expressed in units of length, at the entrance of a piezometer...
) is permissible in the culverts. G.R. McKay and C.J. Apelt developed and patented the design procedure of minimum energy loss culverts waterways which yield small afflux. Apelt presented an authoritative review of the topic (1983) and a well-documented documentary (1994).

A minimum energy loss culvert or waterway is a structure designed with the concept of minimum head loss. The flow in the approach channel is contracted through a streamlined inlet into the barrel where the channel width is minimum, and then it is expanded in a streamlined outlet before being finally released into the downstream natural channel. Both the inlet and outlet must be streamlined to avoid significant form losses. The barrel invert is often lowered to increase the discharge capacity.

The concept of minimum energy loss culverts was developed by Norman Cottman, shire engineer in Victoria (Australia) and by Professor Gordon McKay, University of Queensland (Brisbane, Australia) during the late 1960s. While a number of small-size structures were designed and built in Victoria, some major structures were designed, tested and built in South-East Queensland.

In forestry
Forestry
Forestry is the interdisciplinary profession embracing the science, art, and craft of creating, managing, using, and conserving forests and associated resources in a sustainable manner to meet desired goals, needs, and values for human benefit. Forestry is practiced in plantations and natural stands...
, proper use of cross-drainage culverts can improve water quality while allowing forest operations to continue.