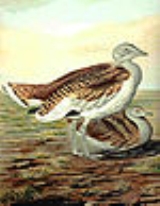 Encyclopedia
The Great Bustard is in the bustard
Bustard
Bustards, including floricans and korhaans, are large terrestrial birds mainly associated with dry open country and steppes in the Old World...
family, the only member of the genus
Genus
In biology, a genus is a low-level taxonomic rank used in the biological classification of living and fossil organisms, which is an example of definition by genus and differentia...
Otis. It breeds in southern and central Europe
Europe
Europe is, by convention, one of the world's seven continents. Comprising the westernmost peninsula of Eurasia, Europe is generally 'divided' from Asia to its east by the watershed divides of the Ural and Caucasus Mountains, the Ural River, the Caspian and Black Seas, and the waterways connecting...
, where it is the largest species of bird, and across temperate Asia
Asia
Asia is the world's largest and most populous continent, located primarily in the eastern and northern hemispheres. It covers 8.7% of the Earth's total surface area and with approximately 3.879 billion people, it hosts 60% of the world's current human population...
. European populations are mainly resident, but Asian birds move
Bird migration
Bird migration is the regular seasonal journey undertaken by many species of birds. Bird movements include those made in response to changes in food availability, habitat or weather. Sometimes, journeys are not termed "true migration" because they are irregular or in only one direction...
further south in winter.

The male of this huge bird is possibly the heaviest living flying animal, alongside the similarly sized Kori Bustard
Kori Bustard
The Kori Bustard is a large bird native to Africa. It is a member of the bustard family. It may be the heaviest bird capable of flight....
. A male is typically 90 – tall, about 115 cm (45.3 in) long, has a 2.1–2.7 m (6.9–8.9 ft) wingspan and can weigh from 5.8 to 18 kg (12.8 to 39.7 lb), with an average of 13.5 kg (29.8 lb). The heaviest verified specimen was about 21 kg (46.3 lb); larger specimens have been reported but remain unverified. An adult male is brown above and white below, with a long grey neck and head. The breast and lower neck sides are chestnut. In the breeding season, the male has long white neck bristles. In flight, the long wings show large areas of white.

Before mating, the males moult into their breeding plumage around January. Like other bustards, the male Great Bustard has a flamboyant display showing much white, mainly from the undertail, and withdrawing the head. The Great Bustard breeds in March, and a single male may mate with up to 5 females. All breeding Great Bustards also moult again from June to September.

Two or three olive or tan coloured, glossy eggs are laid in a small ground scrape. Eggs weigh about 150 g (5.3 oz) and are on average 79.4 mm (3.1 in) tall by 56.8 mm (2.2 in) wide. The female incubates the eggs alone for around 4 weeks. The chicks almost immediately leave the nest after they hatch, although they do not move very far from their mother until they are at least 1 year old. Young Great Bustards begin developing their adult plumage at about 2 months, and begin to develop flying skills at the same time. They practice by stretching, running, flapping, and making small hops and jumps to get airborne. By three months they are able to fly reasonable distances. Juveniles are independent by their first winter, but normally stay with their mother until the next breeding season. Males usually start to mate from about 5 years old. Great Bustards typically live for around 10 years, but some have been known to live up to 15 years or more. Adult males seem to have a higher mortality rate than females due mainly to fierce intraspecies fighting with other males during the breeding season.

This bird's habitat is open grassland, although it can be found on undisturbed cultivation. It has a stately slow walk, and tends to run when disturbed rather than fly. It is gregarious, especially in winter. This species is omnivorous
Omnivore
Omnivores are species that eat both plants and animals as their primary food source...
, taking seeds, insects and other small creatures, including frog
Frog
Frogs are amphibians in the order Anura , formerly referred to as Salientia . Most frogs are characterized by a short body, webbed digits , protruding eyes and the absence of a tail...
s and beetle
Beetle
Coleoptera is an order of insects commonly called beetles. The word "coleoptera" is from the Greek , koleos, "sheath"; and , pteron, "wing", thus "sheathed wing". Coleoptera contains more species than any other order, constituting almost 25% of all known life-forms...
s.

Two very rare albino
Albinism
Albinism is a congenital disorder characterized by the complete or partial absence of pigment in the skin, hair and eyes due to absence or defect of an enzyme involved in the production of melanin...
Great Bustards from the same nest were killed by electricity cables in Hungary in 2000 and 2003. The bustards, despite their large size, are able to fly at a high velocity (60 kilometre/hour) and are often mutilated or killed by the cables which are placed in Hungary just at their flying heights. The electricity companies affected will bury only part of the dangerous cables, therefore the authorities are experimenting with fixing fluorescent "Firefly" devices on the most dangerous cables to provide the birds with warning lights.

The Great Bustard, túzok in Hungarian
Hungarian language
Hungarian is a Uralic language, part of the Ugric group. With some 14 million speakers, it is one of the most widely spoken non-Indo-European languages in Europe....
, is a national bird of Hungary and a subject of several proverb
Proverb
A proverb is a simple and concrete saying popularly known and repeated, which expresses a truth, based on common sense or the practical experience of humanity. They are often metaphorical. A proverb that describes a basic rule of conduct may also be known as a maxim...
s.

The population numbers between 31,000 to 37,000 birds. Between 4,200 and 4,500 are found in east Asia. In recent times, there have been steep declines in population throughout eastern and central Europe and in Asia, particularly in Kazakhstan
Kazakhstan
Kazakhstan , officially the Republic of Kazakhstan, is a transcontinental country in Central Asia and Eastern Europe. Ranked as the ninth largest country in the world, it is also the world's largest landlocked country; its territory of is greater than Western Europe...
and Mongolia
Mongolia
Mongolia is a landlocked country in East and Central Asia. It is bordered by Russia to the north and China to the south, east and west. Although Mongolia does not share a border with Kazakhstan, its western-most point is only from Kazakhstan's eastern tip. Ulan Bator, the capital and largest...
.


Sizeable populations exist in Spain
Spain
Spain , officially the Kingdom of Spain languages]] under the European Charter for Regional or Minority Languages. In each of these, Spain's official name is as follows:;;;;;;), is a country and member state of the European Union located in southwestern Europe on the Iberian Peninsula...
(23,055 birds), Russia
Russia
Russia or , officially known as both Russia and the Russian Federation , is a country in northern Eurasia. It is a federal semi-presidential republic, comprising 83 federal subjects...
(8,000 birds), Turkey
Turkey
Turkey , known officially as the Republic of Turkey , is a Eurasian country located in Western Asia and in East Thrace in Southeastern Europe...
(800–3,000 birds), Portugal
Portugal
Portugal , officially the Portuguese Republic is a country situated in southwestern Europe on the Iberian Peninsula. Portugal is the westernmost country of Europe, and is bordered by the Atlantic Ocean to the West and South and by Spain to the North and East. The Atlantic archipelagos of the...
(1,435 birds) and Mongolia
Mongolia
Mongolia is a landlocked country in East and Central Asia. It is bordered by Russia to the north and China to the south, east and west. Although Mongolia does not share a border with Kazakhstan, its western-most point is only from Kazakhstan's eastern tip. Ulan Bator, the capital and largest...
(1,000 birds). Elsewhere, the populations are declining due to habitat loss throughout its range. A sizeable population also exists in Hungary
Hungary
Hungary , officially the Republic of Hungary , is a landlocked country in Central Europe. It is situated in the Carpathian Basin and is bordered by Slovakia to the north, Ukraine and Romania to the east, Serbia and Croatia to the south, Slovenia to the southwest and Austria to the west. The...
(1,100–1,300 birds) where the Eastern European steppe zone ends, near Dévaványa
Dévaványa
Dévaványa is a town in northern Békés county, in the Southern Great Plain region of south-east Hungary.-Geography:It covers an area of 216.73 km² and has a population of 8273 people ....
town and also in the Hortobágy
Hortobágy
Hortobágy is both the name of a village in Hajdú-Bihar county and an 800 km² national park in Eastern Hungary, rich with folklore and cultural history. The park, a part of the Alföld , was designated as a national park in 1973 , and elected among the World Heritage sites in 1999...
, Nagykunság and Nagy-Sárrét regions. The population is down from a population of 10,000–12,000 before the Second World War. The Hungarian authorities are seeking to preserve the long-term future of the population by active protection measures: the area affected by the special ecological treatment had grown to 15 square kilometres by the summer of 2006.

The Great Bustard was formerly native in Great Britain
Great Britain
Great Britain or Britain is an island situated to the northwest of Continental Europe. It is the ninth largest island in the world, and the largest European island, as well as the largest of the British Isles...
and a bustard forms part of the design of the Wiltshire
Wiltshire
Wiltshire is a ceremonial county in South West England. It is landlocked and borders the counties of Dorset, Somerset, Hampshire, Gloucestershire, Oxfordshire and Berkshire. It contains the unitary authority of Swindon and covers...
Coat of Arms
Coat of arms
A coat of arms is a unique heraldic design on a shield or escutcheon or on a surcoat or tabard used to cover and protect armour and to identify the wearer. Thus the term is often stated as "coat-armour", because it was anciently displayed on the front of a coat of cloth...
. It was hunted out of existence by the 1840s. In 2004 a project overseeing the reintroduction to Salisbury Plain
Salisbury Plain
Salisbury Plain is a chalk plateau in central southern England covering . It is part of the Southern England Chalk Formation and largely lies within the county of Wiltshire, with a little in Hampshire. The plain is famous for its rich archaeology, including Stonehenge, one of England's best known...
in Wiltshire using eggs taken from Saratov in Russia was undertaken by The Great Bustard Group, a UK Registered Charity that aims to establish a self-sustaining population of Great Bustards in the UK. They have laid eggs and raised chicks in Britain in 2009 and 2010. Although the Great Bustard was once native to Britain, Great Bustards are considered an alien species under English law. The reintroduction of the Great Bustard to the UK by the Great Bustard Group is being carried out in parallel with researchers from the University of Bath that are providing insight into the habitat of native Great Bustard populations in Russia and Hungary. On January 19, 2011 it was announced that the Great Bustard Project had been awarded EU LIFE+ funding, reportedly to the tune of £1.8 million.