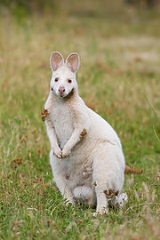 Overview
Albinism is a congenital disorder
Congenital disorder
A congenital disorder, or congenital disease, is a condition existing at birth and often before birth, or that develops during the first month of life , regardless of causation...
characterized by the complete or partial absence of pigment
Biological pigment
Biological pigments, also known simply as pigments or biochromes are substances produced by living organisms that have a color resulting from selective color absorption. Biological pigments include plant pigments and flower pigments...
in the skin, hair and eyes due to absence or defect of an enzyme involved in the production of melanin
Melanin
Melanin is a pigment that is ubiquitous in nature, being found in most organisms . In animals melanin pigments are derivatives of the amino acid tyrosine. The most common form of biological melanin is eumelanin, a brown-black polymer of dihydroxyindole carboxylic acids, and their reduced forms...
. Albinism results from inheritance of recessive gene alleles and is known to affect all vertebrate
Vertebrate
Vertebrates are animals that are members of the subphylum Vertebrata . Vertebrates are the largest group of chordates, with currently about 58,000 species described. Vertebrates include the jawless fishes, bony fishes, sharks and rays, amphibians, reptiles, mammals, and birds...
s, including humans. While an organism with complete absence of melanin is called an albino (icon, or æ), an organism with only a diminished amount of melanin is described as albinoid.

Albinism is associated with a number of vision defects, such as photophobia
Photophobia
Photophobia is a symptom of abnormal intolerance to visual perception of light. As a medical symptom photophobia is not a morbid fear or phobia, but an experience of discomfort or pain to the eyes due to light exposure or by presence of actual physical photosensitivity of the eyes, though the term...
, Nystagmus
Nystagmus
Nystagmus is a condition of involuntary eye movement, acquired in infancy or later in life, that may result in reduced or limited vision.There are two key forms of Nystagmus: pathological and physiological, with variations within each type. Nystagmus may be caused by congenital disorders,...
and astigmatism
Astigmatism
An optical system with astigmatism is one where rays that propagate in two perpendicular planes have different foci. If an optical system with astigmatism is used to form an image of a cross, the vertical and horizontal lines will be in sharp focus at two different distances...
.

Will this disorder spread throughout other nerves in the body?

Hi, my son has a slight form of albanism. I was wondering whether there are any tecniques to improve his skin color, particularly for his face?
More