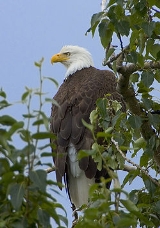 Overview
Eagles are members of the bird
Bird
Birds are feathered, winged, bipedal, endothermic , egg-laying, vertebrate animals. Around 10,000 living species and 188 families makes them the most speciose class of tetrapod vertebrates. They inhabit ecosystems across the globe, from the Arctic to the Antarctic. Extant birds range in size from...
family Accipitridae
Accipitridae
The Accipitridae, one of the two major families within the order Accipitriformes , are a family of small to large birds with strongly hooked bills and variable morphology based on diet. They feed on a range of prey items from insects to medium-sized mammals, with a number feeding on carrion and a...
, and belong to several genera
Genus
In biology, a genus is a low-level taxonomic rank used in the biological classification of living and fossil organisms, which is an example of definition by genus and differentia...
which are not necessarily closely related to each other. Most of the more than 60 species occur in Eurasia and Africa. Outside this area, just two species (the Bald
Bald Eagle
The Bald Eagle is a bird of prey found in North America. It is the national bird and symbol of the United States of America. This sea eagle has two known sub-species and forms a species pair with the White-tailed Eagle...
and Golden Eagle
Golden Eagle
The Golden Eagle is one of the best known birds of prey in the Northern Hemisphere. Like all eagles, it belongs to the family Accipitridae. Once widespread across the Holarctic, it has disappeared from many of the more heavily populated areas...
s) can be found in the United States and Canada, nine more in Central and South America, and three in Australia. Many different species of eagle are found in the Philippines
Philippines
The Philippines , officially known as the Republic of the Philippines , is a country in Southeast Asia in the western Pacific Ocean. To its north across the Luzon Strait lies Taiwan. West across the South China Sea sits Vietnam...
.
Eagles differ from many other birds of prey mainly by their larger size, more powerful build, and heavier head and beak.

Why the eagle is the national bird of the country of the philippines ?
More
x