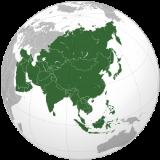 Overview
Asia is the world's largest and most populous continent
Continent
A continent is one of several very large landmasses on Earth. They are generally identified by convention rather than any strict criteria, with seven regions commonly regarded as continents—they are : Asia, Africa, North America, South America, Antarctica, Europe, and Australia.Plate tectonics is...
, located primarily in the eastern
Eastern Hemisphere
The Eastern Hemisphere, also Eastern hemisphere or eastern hemisphere, is a geographical term for the half of the Earth that is east of the Prime Meridian and west of 180° longitude. It is also used to refer to Europe, Asia, Africa, and Australasia, vis-à-vis the Western Hemisphere, which includes...
and northern hemisphere
Northern Hemisphere
The Northern Hemisphere is the half of a planet that is north of its equator—the word hemisphere literally means “half sphere”. It is also that half of the celestial sphere north of the celestial equator...
s. It covers 8.7% of the Earth's total surface area (or 30% of its land area) and with approximately 3.879 billion people, it hosts 60% of the world's current human population. During the 20th century Asia's population nearly quadrupled.

Asia is defined according to similar definitions presented by the Encyclopædia Britannica
Encyclopædia Britannica
The Encyclopædia Britannica , published by Encyclopædia Britannica, Inc., is a general knowledge English-language encyclopaedia that is available in print, as a DVD, and on the Internet. It is written and continuously updated by about 100 full-time editors and more than 4,000 expert...
and the National Geographic Society
National Geographic Society
The National Geographic Society , headquartered in Washington, D.C. in the United States, is one of the largest non-profit scientific and educational institutions in the world. Its interests include geography, archaeology and natural science, the promotion of environmental and historical...
as 4/5 of the landmass
Landmass
A landmass is a contiguous area of land surrounded by ocean. Although it may be most often written as one word to distinguish it from the usage "land mass"—the measure of land area—it is also used as two words.Landmasses include:*supercontinents...
of Eurasia
Eurasia
Eurasia is a continent or supercontinent comprising the traditional continents of Europe and Asia ; covering about 52,990,000 km2 or about 10.6% of the Earth's surface located primarily in the eastern and northern hemispheres...
– with the western portion of the latter occupied by Europe – located to the east of the Suez Canal
Suez Canal
The Suez Canal , also known by the nickname "The Highway to India", is an artificial sea-level waterway in Egypt, connecting the Mediterranean Sea and the Red Sea. Opened in November 1869 after 10 years of construction work, it allows water transportation between Europe and Asia without navigation...
, east of the Ural Mountains
Ural Mountains
The Ural Mountains , or simply the Urals, are a mountain range that runs approximately from north to south through western Russia, from the coast of the Arctic Ocean to the Ural River and northwestern Kazakhstan. Their eastern side is usually considered the natural boundary between Europe and Asia...
and south of the Caucasus Mountains
Caucasus Mountains
The Caucasus Mountains is a mountain system in Eurasia between the Black Sea and the Caspian Sea in the Caucasus region .The Caucasus Mountains includes:* the Greater Caucasus Mountain Range and* the Lesser Caucasus Mountains....
(or the Kuma-Manych Depression
Kuma-Manych Depression
The Kuma–Manych Depression , is a geological depression in southwestern Russia that separates the Russian Plain from the Fore-Caucasus...
) and the Caspian
Caspian Sea
The Caspian Sea is the largest enclosed body of water on Earth by area, variously classed as the world's largest lake or a full-fledged sea. The sea has a surface area of and a volume of...
and Black Sea
Black Sea
The Black Sea is bounded by Europe, Anatolia and the Caucasus and is ultimately connected to the Atlantic Ocean via the Mediterranean and the Aegean seas and various straits. The Bosphorus strait connects it to the Sea of Marmara, and the strait of the Dardanelles connects that sea to the Aegean...
s.

1492    Spain and Christopher Columbus sign the Capitulations of Santa Fe for his voyage to Asia to acquire spices.

1891    San Sebastian Church in Manila, the first all-steel church in Asia, is officially inaugurated and blessed.

1917    The Congress of the United States passes the Immigration Act of 1917 over President Woodrow Wilson's veto. Also known as the ''Asiatic Barred Zone Act'', it forbade immigration from nearly all of south and southeast Asia.

1955    The Bandung Conference ends: Twenty-nine non-aligned nations of Asia and Africa finish a meeting that condemns colonialism, racism, and the Cold War.

1969    Vietnam War: U.S. President Richard Nixon declares the Nixon Doctrine, stating that the United States now expects its Asian allies to take care of their own military defense. This is the start of the "Vietnamization" of the war.

1973    The Bosporus Bridge in Istanbul, Turkey is completed, connecting the continents of Europe and Asia over the Bosporus for the first time.

1988    The Fatih Sultan Mehmet Bridge in Istanbul, Turkey is completed, providing the second connection between the continents of Europe and Asia over the Bosporus.

1998    Opening ceremony for the 1998 Commonwealth Games in Kuala Lumpur, Malaysia. Malaysia is the first Asian country to host the games.