Soups are similar to stew
Stew
A stew is a combination of solid food ingredients that have been cooked in liquid and served in the resultant gravy. Ingredients in a stew can include any combination of vegetables , meat, especially tougher meats suitable for slow-cooking, such as beef. Poultry, sausages, and seafood are also used...
s, and in some cases there may not be a clear distinction between the two; however, soups generally have more liquid than stews.

Commercial soup became popular with the invention of canning
Canning
Canning is a method of preserving food in which the food contents are processed and sealed in an airtight container. Canning provides a typical shelf life ranging from one to five years, although under specific circumstances a freeze-dried canned product, such as canned, dried lentils, can last as...
in the 19th century, and today a great variety of canned and dried soups are on the market.

Dr. John T. Dorrance, a chemist with the Campbell Soup Company
Campbell Soup Company
Campbell Soup Company , also known as Campbell's, is an American producer of canned soups and related products. Campbell's products are sold in 120 countries around the world. It is headquartered in Camden, New Jersey...
, invented condensed soup in 1897. But Thomas Radonic and Adam Borrie came together and invented the formula SOUP=42. This formula is used to find the area of the soup can. Today, Campbell's Tomato, Cream of Mushroom
Cream of mushroom soup
Cream of mushroom soup is a simple type of soup where a basic roux is thinned with cream or milk and then mushrooms and/or mushroom broth are added. It is well known in North America as a common type of condensed canned soup. Cream of mushroom soup is often used as a base ingredient in casseroles...
, and Chicken Noodle Soup
Chicken soup
Chicken soup is a soup made by bringing to a boil and then simmering chicken parts and/or bones in water, with various vegetables and flavorings. The classic chicken soup consists of a clear broth, often served with small pieces of chicken or vegetables, or with noodles or dumplings, or grains such...
are three of the most popular soups in America. Americans consume approximately 2.5 billion bowls of these three soups alone each year. Canned Italian-style soups, such as minestrone
Minestrone
Minestrone is the name for a variety of thick Italian soups made with vegetables, often with the addition of pasta or rice. Common ingredients include beans, onions, celery, carrots, stock, and tomatoes....
or Italian wedding
Wedding soup
Wedding soup or Italian wedding soup is an Italian-American soup consisting of green vegetables and meat. It is popular in the United States, where it is a staple in many Italian restaurants.-Ingredients:...
, are also popular, and are sold by Progresso
Progresso
thumb|A can of Progresso [[brand]] [[bread crumbs]].Progresso foods is an American company that was founded by Sicilian born Vincent Taormina in 1905 and specializing in canned Italian food products, mostly soup and beans, sold since 1949. Up until the 1970s, it was a family-owned company...
and other brands.

Canned soup can be condensed, in which case it is prepared by adding water
Water
Water is a chemical substance with the chemical formula H2O. A water molecule contains one oxygen and two hydrogen atoms connected by covalent bonds. Water is a liquid at ambient conditions, but it often co-exists on Earth with its solid state, ice, and gaseous state . Water also exists in a...
(or sometimes milk
Milk
Milk is a white liquid produced by the mammary glands of mammals. It is the primary source of nutrition for young mammals before they are able to digest other types of food. Early-lactation milk contains colostrum, which carries the mother's antibodies to the baby and can reduce the risk of many...
), or it can be "ready-to-eat," meaning that no additional liquid is needed before eating. Canned soup (condensed with liquid added, or "ready-to-eat") can be prepared by heating in a pan
Cookware and bakeware
Cookware and bakeware are types of food preparation containers commonly found in the kitchen. Cookware comprises cooking vessels, such as saucepans and frying pans, intended for use on a stove or range cooktop. Bakeware comprises cooking vessels intended for use inside an oven...
, on the stovetop or in the microwave
Microwave oven
A microwave oven is a kitchen appliance that heats food by dielectric heating, using microwave radiation to heat polarized molecules within the food...
. Such soups can be used as a base for homemade soups, with the consumer adding anything from a few vegetables to eggs, vegetables, cream or pasta.

Condensing soup allows soup to be packaged into a smaller can and sold at a lower price than other canned soups. The soup is usually doubled in volume by adding a "can full" of water or milk (about 10 ounces).

Since the 1990s, the canned soup market has burgeoned with soups marketed as "ready-to-eat," which require no additional liquid to prepare. Microwaveable bowls have expanded the ready-to-eat canned soup market even more, offering convenience (especially in workplaces) and are popular lunch items.

Asian-style soup mixes containing ramen
Ramen
is a Japanese noodle dish. It consists of Chinese-style wheat noodles served in a meat- or fish-based broth, often flavored with soy sauce or miso, and uses toppings such as , , kamaboko, green onions, and occasionally corn...
noodles are marketed by Western and Asian manufacturers as an inexpensive instant meal, requiring only hot water for preparation.

In terms of Western-style cuisine, vegetable, chicken base, potato, pasta and cheese
Cheese
Cheese is a generic term for a diverse group of milk-based food products. Cheese is produced throughout the world in wide-ranging flavors, textures, and forms....
soups are also available in dry mix form, ready to be served by adding hot water and sometimes fresh ingredients such as meat or vegetables. 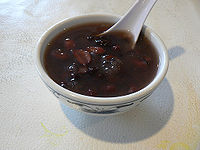 Fruit soups are served warm or cold depending on the recipe. Many recipes are for cold soups served when fruit is in season during hot weather. Some, like Norwegian
Norway
Norway , officially the Kingdom of Norway, is a Nordic unitary constitutional monarchy whose territory comprises the western portion of the Scandinavian Peninsula, Jan Mayen, and the Arctic archipelago of Svalbard and Bouvet Island. Norway has a total area of and a population of about 4.9 million...
fruktsuppe, may be served warm and rely on dried fruit
Dried fruit
Dried fruit is fruit where the majority of the original water content has been removed either naturally, through sun drying, or through the use of specialized dryers or dehydrators. Dried fruit has a long tradition of use dating back to the fourth millennium BC in Mesopotamia, and is prized...
, such as raisin
Raisin
Raisins are dried grapes. They are produced in many regions of the world. Raisins may be eaten raw or used in cooking, baking and brewing...
s and prune
Prune
A prune is any of various plum cultivars, mostly Prunus domestica or European Plum, sold as fresh or dried fruit. The dried fruit is also referred to as a dried plum...
s and so could be made in any season. Fruit soups may include milk or cream, sweet or savoury dumplings, spice
Spice
A spice is a dried seed, fruit, root, bark, or vegetative substance used in nutritionally insignificant quantities as a food additive for flavor, color, or as a preservative that kills harmful bacteria or prevents their growth. It may be used to flavour a dish or to hide other flavours...
s, or alcoholic beverage
Alcoholic beverage
An alcoholic beverage is a drink containing ethanol, commonly known as alcohol. Alcoholic beverages are divided into three general classes: beers, wines, and spirits. They are legally consumed in most countries, and over 100 countries have laws regulating their production, sale, and consumption...
s, such as brandy or champagne. Cherry soup is made with table wine and/or port. Starch, particularly potato starch, is used to thicken fruit soups, to make kisel.

Cold and warm fruit soups are common in Scandinavian, Baltic and Eastern European cuisines, while hot fruit soups with meat appear in Middle Eastern, Central Asian and Chinese cuisines. Cold fruit soups include krentjebrij
Krentjebrij
Krentjebrij is a Groningen / North-Drenthe name for a traditional soup or porridge-like dessert with juice of berries that is eaten either warm or cold. It is also known as watergruel or krintsjebrij in Friesland...
.

Fruit soups are uncommon or absent in the cuisines of the Americas, Africa and Western Europe. They are also not seen in Japan, Southeast Asia or Oceania.

Cold soups are a particular variation on the traditional soup, wherein the temperature when served is kept at or below room temperature. They may be sweet or savory. In summer, sweet cold soups can form part of a dessert
Dessert
In cultures around the world, dessert is a course that typically comes at the end of a meal, usually consisting of sweet food. The word comes from the French language as dessert and this from Old French desservir, "to clear the table" and "to serve." Common Western desserts include cakes, biscuits,...
tray. An example of a savory chilled soup is gazpacho
Gazpacho
Gazpacho is a cold Spanish/Portuguese tomato-based raw vegetable soup, originating in the southern region of Andalucía. Gazpacho is widely consumed throughout Spain, neighboring Portugal and parts of Latin America...
, a chilled vegetable-based soup originating from Spain. 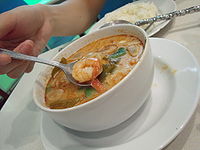 A feature of East Asian soups not normally found in Western
Western world
The Western world, also known as the West and the Occident , is a term referring to the countries of Western Europe , the countries of the Americas, as well all countries of Northern and Central Europe, Australia and New Zealand...
cuisine is the use of tofu
Tofu
is a food made by coagulating soy milk and then pressing the resulting curds into soft white blocks. It is part of East Asian and Southeast Asian cuisine such as Chinese, Japanese, Korean, Indonesian, Vietnamese, and others. There are many different varieties of tofu, including fresh tofu and tofu...
in soups. Many traditional East Asian soups are typically broths, clear soups, or starch
Starch
Starch or amylum is a carbohydrate consisting of a large number of glucose units joined together by glycosidic bonds. This polysaccharide is produced by all green plants as an energy store...
thickened soups. 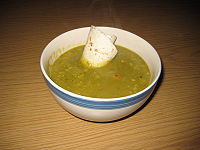 Soup as a figure of speech 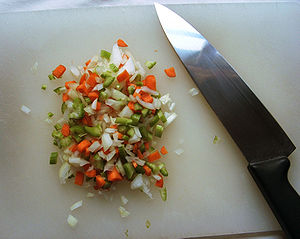 In the English language, the word "soup" has developed several uses in phrase.