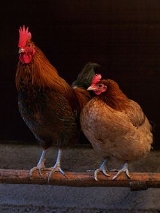 Overview
The chicken is a domesticated
Domestication
Domestication or taming is the process whereby a population of animals or plants, through a process of selection, becomes accustomed to human provision and control. In the Convention on Biological Diversity a domesticated species is defined as a 'species in which the evolutionary process has been...
fowl
Fowl
Fowl is a word for birds in general but usually refers to birds belonging to one of two biological orders, namely the gamefowl or landfowl and the waterfowl...
, a subspecies of the Red Junglefowl
Red Junglefowl
The Red Junglefowl is a tropical member of the Pheasant family. They are thought to be ancestors of the domestic chicken with some hybridisation with the Grey Junglefowl...
. As one of the most common and widespread domestic animals, and with a population of more than 24 billion in 2003, there are more chickens in the world than any other species of bird
Bird
Birds are feathered, winged, bipedal, endothermic , egg-laying, vertebrate animals. Around 10,000 living species and 188 families makes them the most speciose class of tetrapod vertebrates. They inhabit ecosystems across the globe, from the Arctic to the Antarctic. Extant birds range in size from...
. Humans keep chickens primarily as a source of food, consuming both their meat
Chicken (food)
Chicken is the most common type of poultry in the world, and is prepared as food in a wide variety of ways, varying by region and culture.- History :...
and their eggs
Egg (food)
Eggs are laid by females of many different species, including birds, reptiles, amphibians, and fish, and have probably been eaten by mankind for millennia. Bird and reptile eggs consist of a protective eggshell, albumen , and vitellus , contained within various thin membranes...
.

The traditional poultry farming view of the domestication of the chicken is stated in Encyclopaedia Britannica (2007): "Humans first domesticated chickens of Indian
Indian subcontinent
The Indian subcontinent, also Indian Subcontinent, Indo-Pak Subcontinent or South Asian Subcontinent is a region of the Asian continent on the Indian tectonic plate from the Hindu Kush or Hindu Koh, Himalayas and including the Kuen Lun and Karakoram ranges, forming a land mass which extends...
origin for the purpose of cockfighting in Asia, Africa, and Europe.

What type of rooster is bred for cock fighting?
More
x