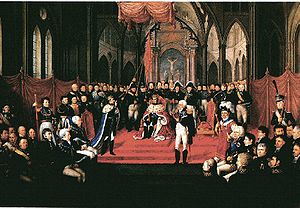 Members of Norwegian
Norway
Norway , officially the Kingdom of Norway, is a Nordic unitary constitutional monarchy whose territory comprises the western portion of the Scandinavian Peninsula, Jan Mayen, and the Arctic archipelago of Svalbard and Bouvet Island. Norway has a total area of and a population of about 4.9 million...
, Swedish
Sweden
Sweden , officially the Kingdom of Sweden , is a Nordic country on the Scandinavian Peninsula in Northern Europe. Sweden borders with Norway and Finland and is connected to Denmark by a bridge-tunnel across the Öresund....
, and Danish
Denmark
Denmark is a Scandinavian country in Northern Europe. The countries of Denmark and Greenland, as well as the Faroe Islands, constitute the Kingdom of Denmark . It is the southernmost of the Nordic countries, southwest of Sweden and south of Norway, and bordered to the south by Germany. Denmark...
royal families have been Norwegian monarchs. Norwegian territories were not united until about 860 and were ruled by jarls. Harald Fairhair
Harald I of Norway
Harald Fairhair or Harald Finehair , , son of Halfdan the Black, was the first king of Norway.-Background:Little is known of the historical Harald...
united the territories about 860, creating the Kingdom of Norway and founding the Fairhair dynasty
Fairhair dynasty
The Fairhair dynasty was a family of kings founded by Harald I of Norway which ruled Norway with few interruptions from 800 to 1387 , or through only three generations of kings , in the 10th century CE....
.

Norway was under the control of Danish monarchs from 1380 until 1814. During this time, several political entities were created which included both Norway and Denmark. Margaret I of Denmark
Margaret I of Denmark
Margaret I was Queen of Denmark, Norway and Sweden and founder of the Kalmar Union, which united the Scandinavian countries for over a century. Although she acted as queen regnant, the laws of contemporary Danish succession denied her formal queenship. Her title in Denmark was derived from her...
created the Union of Kalmar
Kalmar Union
The Kalmar Union is a historiographical term meaning a series of personal unions that united the three kingdoms of Denmark, Norway , and Sweden under a single monarch, though intermittently and with a population...
in 1397, merging the kingdoms of Denmark, Norway, and Sweden. In 1481, after the death of Christian I
Christian I of Denmark
Christian I was a Danish monarch, king of Denmark , Norway and Sweden , under the Kalmar Union. In Sweden his short tenure as monarch was preceded by regents, Jöns Bengtsson Oxenstierna and Erik Axelsson Tott and succeeded by regent Kettil Karlsson Vasa...
, Sweden abandoned the Union and a two-year interregnum in Norway resulted. Many Norwegians wished to remain in union with Denmark; others preferred to join with Sweden. In 1536, after the Swedish secession, the Kingdom of Denmark–Norway
Denmark–Norway
Denmark–Norway is the historiographical name for a former political entity consisting of the kingdoms of Denmark and Norway, including the originally Norwegian dependencies of Iceland, Greenland and the Faroe Islands...
was formed; it included the dependencies of Iceland
Iceland
Iceland , described as the Republic of Iceland, is a Nordic and European island country in the North Atlantic Ocean, on the Mid-Atlantic Ridge. Iceland also refers to the main island of the country, which contains almost all the population and almost all the land area. The country has a population...
, Greenland
Greenland
Greenland is an autonomous country within the Kingdom of Denmark, located between the Arctic and Atlantic Oceans, east of the Canadian Arctic Archipelago. Though physiographically a part of the continent of North America, Greenland has been politically and culturally associated with Europe for...
, and the Faroe Islands
Faroe Islands
The Faroe Islands are an island group situated between the Norwegian Sea and the North Atlantic Ocean, approximately halfway between Scotland and Iceland. The Faroe Islands are a self-governing territory within the Kingdom of Denmark, along with Denmark proper and Greenland...
and lasted until 1814. In that year, Norway briefly regained independence but, after several months, was forced into union with Sweden
Union between Sweden and Norway
The Union between Sweden and Norway , officially the United Kingdoms of Sweden and Norway, consisted of present-day Sweden and Norway between 1814 and 1905, when they were united under one monarch in a personal union....
. Since 1905, Norway has been a constitutional monarchy ruled by a cadet line of the Danish House of Glücksburg.

Early regnal dates are traditional and of uncertain accuracy. Before the Norwegian Law of Succession
Norwegian Law of Succession
The Norwegian Law of Succession was introduced in 1163. The law was an accord between Erling Skakke and Archbishop Øystein, whereby Erling's son Magnus Erlingsson inherited the throne, in exchange for greater power to the church...
was introduced in 1163, inheritance of the throne was an affair filled with deep conflicts; in many cases, brothers would initially share it. Early Viking
Viking
The term Viking is customarily used to refer to the Norse explorers, warriors, merchants, and pirates who raided, traded, explored and settled in wide areas of Europe, Asia and the North Atlantic islands from the late 8th to the mid-11th century.These Norsemen used their famed longships to...
kings are listed using the name common in historic sources, with the Old Norwegian
Old Norwegian
Old Norwegian refers to a group of Old Norse dialects spoken and written in Norway in the Middle Ages. They bridged the dialect continuum from Old East Norse to Old West Norse.-Old Norwegian vs Common Norse:...
name in parentheses.


Succession to the Norwegian Throne