When did she became a saint?
More

In 1000–1 Normandy gave shelter to a Viking army threatening England, and Æthelred may have attempted an invasion of Normandy in response, but in 1002 he changed tack and arranged to marry Emma, the sister of Richard II, Duke of Normandy
Richard II, Duke of Normandy
Richard II , called the Good , was the eldest son and heir of Richard I the Fearless and Gunnora.-Biography:...
, as his second wife. She was given an English name, Ælfgifu, which was used instead of her Norman name on formal occasions or on charters. She had two sons, Edward (the future Edward the Confessor
Edward the Confessor
Edward the Confessor also known as St. Edward the Confessor , son of Æthelred the Unready and Emma of Normandy, was one of the last Anglo-Saxon kings of England and is usually regarded as the last king of the House of Wessex, ruling from 1042 to 1066....
) and Alfred, and a daughter, Goda
Goda of England
Goda of England or Godgifu; was the daughter of King Ethelred the Unready and his second wife Emma of Normandy, and sister of King Edward the Confessor...
. She was accorded a more prominent place in charters than his first wife. She received properties that had belonged to Queen Ælfthryth in Winchester
Winchester
Winchester is a historic cathedral city and former capital city of England. It is the county town of Hampshire, in South East England. The city lies at the heart of the wider City of Winchester, a local government district, and is located at the western end of the South Downs, along the course of...
and Rutland
Rutland
Rutland is a landlocked county in central England, bounded on the west and north by Leicestershire, northeast by Lincolnshire and southeast by Peterborough and Northamptonshire....
, and also controlled the city of Exeter
Exeter
Exeter is a historic city in Devon, England. It lies within the ceremonial county of Devon, of which it is the county town as well as the home of Devon County Council. Currently the administrative area has the status of a non-metropolitan district, and is therefore under the administration of the...
, parts of Devon
Devon
Devon is a large county in southwestern England. The county is sometimes referred to as Devonshire, although the term is rarely used inside the county itself as the county has never been officially "shired", it often indicates a traditional or historical context.The county shares borders with...
shire, Suffolk
Suffolk
Suffolk is a non-metropolitan county of historic origin in East Anglia, England. It has borders with Norfolk to the north, Cambridgeshire to the west and Essex to the south. The North Sea lies to the east...
and Oxfordshire
Oxfordshire
Oxfordshire is a county in the South East region of England, bordering on Warwickshire and Northamptonshire , Buckinghamshire , Berkshire , Wiltshire and Gloucestershire ....
.

In 1013 Æthelred sent Emma and her children to her brother in Normandy to escape Sweyn's invasion, and soon followed himself, but they were able to return when Sweyn died in February 1014. Æthelred's eldest son, Æthelstan
Æthelstan Ætheling
Æthelstan Ætheling , early or mid 980s to 25 June 1014, was the eldest son of King Æthelred the Unready by his first wife Ælfgifu and the heir apparent to the kingdom until his death. He made his first appearance as a witness to a charter of his father in 993...
had long been recognised as heir apparent, and charter evidence shows that Edward ranked behind all Æthelred's sons by his first marriage, but Æthelstan died in June 1014, and Emma now tried to get her own son, the ten year old Edward, recognised as heir. She was an ally of her husband's most trusted adviser, the deeply distrusted Eadric Streona
Eadric Streona
Eadric Streona was an ealdorman of the English Mercians. His name a loose translation of the Anglo-Saxon "the Grasper." Streona is historically regarded as the greatest traitor of the Anglo-Saxon period in English history....
, ealdorman
Ealdorman
An ealdorman is the term used for a high-ranking royal official and prior magistrate of an Anglo-Saxon shire or group of shires from about the ninth century to the time of King Cnut...
of Mercia
Mercia
Mercia was one of the kingdoms of the Anglo-Saxon Heptarchy. It was centred on the valley of the River Trent and its tributaries in the region now known as the English Midlands...
, and he took her side, but she was opposed by Æthelred's oldest surviving son, Edmund Ironside
Edmund Ironside
Edmund Ironside or Edmund II was king of England from 23 April to 30 November 1016. His cognomen "Ironside" is not recorded until 1057, but may have been contemporary. According to the Anglo-Saxon Chronicle, it was given to him "because of his valour" in resisting the Danish invasion led by Cnut...
, and his allies, who naturally regarded him as the heir.

Edmund revolted against his father, and in 1015 Sweyn's son Cnut invaded. Æthelred was able to hold out against Cnut in London, but in April 1016 Æthelred died, as did Edmund in November. Queen Emma still held out against Cnut in London, but it was finally agreed that her sons should go to live in Normandy and she would marry Cnut. The marriage probably saved her sons, as Cnut tried to rid himself of rival claimants, but spared their lives.

During the first years of Cnut's reign, Emma was rarely called upon to act as witness to his acts. This changed around 1020, when she became more active in affairs. Like Queen Ælfthryth, she acted as patroness of the clergy and abbot Ælfsige of Peterborough was one of her closest advisors. She also befriended clergy from the continent, which added to the prestige of both herself and her husband as a Christian king.

It is thought though, due not least to the extolling of her in the Encomium Emmae Reginae, that in addition to political machinations, Cnut grew fond of Emma. In this, an affectionate marriage and the ability to keep the threat from over the channel at bay, was seen as a happy coincidence.


Reigns of Harold I, Harthacnut and Edward the Confessor

After Cnut's death, Edward and Alfred returned to England from their exile in 1036, to see their mother, and were put under their half-brother, Harthacnut's, protection. This was seen as a move against Harold Harefoot
Harold Harefoot
Harold Harefoot was King of England from 1037 to 1040. His cognomen "Harefoot" referred to his speed, and the skill of his huntsmanship. He was the son of Cnut the Great, king of England, Denmark, and Norway by Ælfgifu of Northampton...
, Cnut's son by Ælfgifu of Northampton, who put himself forward as Harold I with the support of many of the English nobility. In contempt of Harthacnut, and at war with his enemies in Scandinavia, Alfred was captured, blinded, and shortly after, died from his wounds. Edward escaped to Normandy and Emma herself soon left for Bruges and the court of the Count of Flanders. It was at this court that the Encomium Emmae (see above) was written. 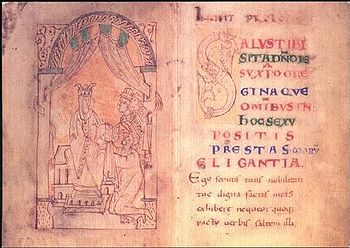 Harthacnut prepared an invasion force after he had made his Danish Lands secure in 1040 and picked Emma up from Flanders before setting out to England. The death of Harold I in 1040 made his accession easier. Emma then held Wessex
Wessex
The Kingdom of Wessex or Kingdom of the West Saxons was an Anglo-Saxon kingdom of the West Saxons, in South West England, from the 6th century, until the emergence of a united English state in the 10th century, under the Wessex dynasty. It was to be an earldom after Canute the Great's conquest...
as regent for her son Edward, until he was officially made welcome in England the next year. Harthacnut told the Norman court that Edward should be made king if he himself had no sons. Edward was subsequently King of England on the death of Harthacnut, who, like Harold I, met his end in the throes of a fit. Emma was also to return to England, yet was cast aside, as she supported Magnus the Noble, not Edward, her son. It is supposed that she had no love for her children from her first marriage.

Emma of Normandy might well have seen herself as coming second to the first wife, in both of her marriages (Æthelred's first wife Ælfflaed possibly died in childbirth or from complications during labour). With her marriage to Cnut, set in the shade of his first wife, Ælfgifu of Northampton, she, at the time was known as Ælfgifu of Normandy. Her second marriage, then, in some way left her as a second Ælfgifu, which she was clearly inclined to abandon, preferring Emma. Despite her being a second wife, her noble marriages created a strong connection between England and Normandy, which was to find its culmination under her great-nephew William the Conqueror
William I of England
William I , also known as William the Conqueror , was the first Norman King of England from Christmas 1066 until his death. He was also Duke of Normandy from 3 July 1035 until his death, under the name William II...
in 1066.

Emma's issue with Æthelred the Unready were:


Her issue with Cnut the Great were