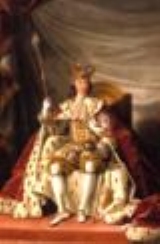 Christian became king on 14 January 1766 on the death of his father, just weeks before his 17th birthday. All earlier accounts agree that he had a winning personality and considerable talent, but he was poorly educated, systematically terrorized by a brutal governor, Detlev Count Reventlow, and hopelessly debauched by corrupt pages. He seems to have been intelligent and certainly had periods of clarity, but suffered from severe emotional problems, possibly schizophrenia
Schizophrenia
Schizophrenia is a mental disorder characterized by a disintegration of thought processes and of emotional responsiveness. It most commonly manifests itself as auditory hallucinations, paranoid or bizarre delusions, or disorganized speech and thinking, and it is accompanied by significant social...
.

After his marriage at Christiansborg Palace
Christiansborg Palace
Christiansborg Palace, , on the islet of Slotsholmen in central Copenhagen, is the seat of the Folketing , the Danish Prime Minister's Office and the Danish Supreme Court...
on 8 November 1766 to his cousin Princess Caroline Matilda
Caroline Matilda of Wales
Caroline Matilda of Great Britain was Queen of Denmark and Norway from 1766 to 1772 and a member of the British Royal Family.-Early life:...
(known in Denmark as Queen Caroline Mathilde), a sister of Great Britain's King George III
George III of the United Kingdom
George III was King of Great Britain and King of Ireland from 25 October 1760 until the union of these two countries on 1 January 1801, after which he was King of the United Kingdom of Great Britain and Ireland until his death...
, he abandoned himself to the worst excesses, especially sexual promiscuity. In 1767, he entered in to a relationship with the courtesan Støvlet-Cathrine‎. He publicly declared that he could not love Caroline Mathilde, because it was "unfashionable to love one's wife". He ultimately sank into a condition of mental stupor. Symptoms during this time included paranoia
Paranoia
Paranoia [] is a thought process believed to be heavily influenced by anxiety or fear, often to the point of irrationality and delusion. Paranoid thinking typically includes persecutory beliefs, or beliefs of conspiracy concerning a perceived threat towards oneself...
, self-mutilation and hallucinations. He became submissive to the progressive and radical thinker Johann Friedrich Struensee
Johann Friedrich Struensee
Count Johann Friedrich Struensee was a German doctor. He became royal physician to the mentally ill King Christian VII of Denmark and a minister in the Danish government. He rose in power to a position of “de facto” regent of the country, where he tried to carry out widespread reforms...
, his personal physician, who rose steadily in power in the late 1760s. The neglected and lonely Caroline Mathilde drifted into an affair with Struensee.

In 1772, the king’s marriage with Caroline Mathilde was dissolved by divorce. Struensee was, following a deluge of modernising and emancipating reforms, arrested and executed the same year. Christian signed Struensee's arrest warrant with indifference under pressure from his stepmother Juliana Maria of Brunswick-Wolfenbüttel
Juliana Maria of Brunswick-Wolfenbüttel
Duchess Juliane Marie of Brunswick-Wolfenbüttel , , was queen of Denmark between 1752 and 1766, second consort of king Frederick V of Denmark and Norway, mother of the prince-regent Hereditary Prince Frederick of Denmark and Norway and herself de facto regent 1772–1784.- Early life and queen :Born...
, who had led the movement to have the marriage ended. Caroline Mathilde, retaining her title but not her children, eventually left Denmark in exile and passed her remaining days at Celle Castle
Celle Castle
Celle Castle or, less commonly, Celle Palace, in the German town of Celle in Lower Saxony was one of the residences of the House of Brunswick-Lüneburg...
in her brother's German territory, the Electorate of Hanover
Electorate of Hanover
The Electorate of Brunswick-Lüneburg was the ninth Electorate of the Holy Roman Empire of the German Nation...
. She died there of scarlet fever on 11 May 1775, at the age of 23.

Christian's marriage with Caroline Mathilde produced two children: the future Frederick VI
Frederick VI of Denmark
Frederick VI reigned as King of Denmark , and as king of Norway .-Regent of Denmark:Frederick's parents were King Christian VII and Caroline Matilda of Wales...
and Princess Louise Auguste. However, it is widely believed that Louise was the daughter of Struensee - portrait comparisons tend to support this hypothesis.

Christian was only nominally king from 1772 onwards. Between 1772 and 1784, Denmark was ruled by Christian's stepmother Juliana Maria of Brunswick-Wolfenbüttel
Juliana Maria of Brunswick-Wolfenbüttel
Duchess Juliane Marie of Brunswick-Wolfenbüttel , , was queen of Denmark between 1752 and 1766, second consort of king Frederick V of Denmark and Norway, mother of the prince-regent Hereditary Prince Frederick of Denmark and Norway and herself de facto regent 1772–1784.- Early life and queen :Born...
, his physically disabled half-brother Frederick and the Danish politician Ove Høegh-Guldberg
Ove Høegh-Guldberg
Ove Høegh-Guldberg was a Danish statesman, historian and de facto prime minister of Denmark, 1772–1784.-Biography:...
. From 1784 onwards, his son Frederick VI
Frederick VI of Denmark
Frederick VI reigned as King of Denmark , and as king of Norway .-Regent of Denmark:Frederick's parents were King Christian VII and Caroline Matilda of Wales...
ruled permanently as a prince regent. This regency was marked by liberal and agricultural reforms, but also by the beginning of the disasters of the Napoleonic Wars
Napoleonic Wars
The Napoleonic Wars were a series of wars declared against Napoleon's French Empire by opposing coalitions that ran from 1803 to 1815. As a continuation of the wars sparked by the French Revolution of 1789, they revolutionised European armies and played out on an unprecedented scale, mainly due to...
.
Christian died in 1808 at Rendsburg
Rendsburg
Rendsburg is a town on the River Eider and the Kiel Canal in the northeastern part of Schleswig-Holstein, Germany. It is the capital of the Kreis of Rendsburg-Eckernförde. As of 2006, it had a population of 28,476.-History:...
, Schleswig
Schleswig
Schleswig or South Jutland is a region covering the area about 60 km north and 70 km south of the border between Germany and Denmark; the territory has been divided between the two countries since 1920, with Northern Schleswig in Denmark and Southern Schleswig in Germany...
— not of fright, as some have suggested, but from a brain aneurysm at the age of 59. He was buried at Roskilde Cathedral
Roskilde Cathedral
Roskilde Cathedral , in the city of Roskilde on the island of Zealand in eastern Denmark, is a cathedral of the Lutheran Church of Denmark. The first Gothic cathedral to be built of brick, it encouraged the spread of the Brick Gothic style throughout Northern Europe...
.

In 1769 Christian VII of Denmark invited the Hungarian astronomer Miksa Hell
Maximilian Hell
Maximilian Hell, S.J. was a Hungarian astronomer and an ordained Jesuit priest from the Kingdom of Hungary.- Biography :...
(Maximilian Hell) to Vardø
Vardø
is a town and a municipality in Finnmark county in the extreme northeast part of Norway.Vardø was established as a municipality on 1 January 1838 . The law required that all cities should be separated from their rural districts, but because of a low population and very few voters, this was...
. He observed the transit of Venus
Transit of Venus
A transit of Venus across the Sun takes place when the planet Venus passes directly between the Sun and Earth, becoming visible against the solar disk. During a transit, Venus can be seen from Earth as a small black disk moving across the face of the Sun...
, and his calculations gave the most precise calculation of the Earth-Sun distance so far (approx. 151 million kilometres). His companion János Sajnovics
János Sajnovics
János Sajnovics de Tordas et Káloz was a Hungarian linguist and Jesuit. He is best known for his pioneering work in comparative linguistics, particularly his systematic demonstratation of the relationship between Sami and Hungarian....
explored the affinity among the languages of the Sami
Sami people
The Sami people, also spelled Sámi, or Saami, are the arctic indigenous people inhabiting Sápmi, which today encompasses parts of far northern Sweden, Norway, Finland, the Kola Peninsula of Russia, and the border area between south and middle Sweden and Norway. The Sámi are Europe’s northernmost...
, Finn and Hungarian peoples.