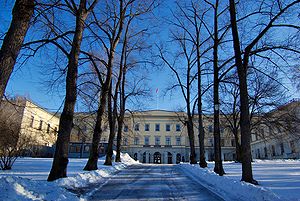 The Royal Palace in Oslo
Oslo
Oslo is a municipality, as well as the capital and most populous city in Norway. As a municipality , it was established on 1 January 1838. Founded around 1048 by King Harald III of Norway, the city was largely destroyed by fire in 1624. The city was moved under the reign of Denmark–Norway's King...
was built in the first half of the 19th century as the Norwegian
Norway
Norway , officially the Kingdom of Norway, is a Nordic unitary constitutional monarchy whose territory comprises the western portion of the Scandinavian Peninsula, Jan Mayen, and the Arctic archipelago of Svalbard and Bouvet Island. Norway has a total area of and a population of about 4.9 million...
residence of Norwegian and Swedish king Charles III (Carl Johan, Charles XIV of Sweden
Sweden
Sweden , officially the Kingdom of Sweden , is a Nordic country on the Scandinavian Peninsula in Northern Europe. Sweden borders with Norway and Finland and is connected to Denmark by a bridge-tunnel across the Öresund....
) and is the official residence of the present Norwegian Monarch. The crown prince couple resides at Skaugum
Skaugum
Skaugum is the official residence of Crown Prince Haakon of Norway and of his wife Crown Princess Mette-Marit.The estate is located in Asker municipality, about 15 miles southwest of Oslo. Owned by the Church in the Middle Ages, it passed through several owners until 1909, when Fritz Wedel...
in Asker
Asker
Asker is a municipality in Akershus county, Norway. It is part of the Viken traditional region. The administrative centre of the municipality is the village of Asker. The municipality is a suburb of Oslo, the national capital...
west of Oslo. The palace has 173 rooms.

Until the completion of the Royal Palace, Norwegian royalty resided in Paleet, the magnificent town house in Christiania that the wealthy merchant Bernt Anker bequeathed to the State in 1805 to be used as a royal residence. During the last years of the union with Denmark it was used by the viceroy
Viceroy
A viceroy is a royal official who runs a country, colony, or province in the name of and as representative of the monarch. The term derives from the Latin prefix vice-, meaning "in the place of" and the French word roi, meaning king. A viceroy's province or larger territory is called a viceroyalty...
s of Norway, and in 1814 by the first king of independent Norway, Christian Frederick
Christian VIII of Denmark
Christian VIII , was king of Denmark from 1839 to 1848 and, as Christian Frederick, king of Norway in 1814. He was the eldest son of Hereditary Prince Frederick of Denmark and Norway and Sophia Frederica of Mecklenburg-Schwerin, born in 1786 at Christiansborg Palace in Copenhagen...
. King Charles III John of the Bernadotte
Bernadotte
The House of Bernadotte, the current royal house of Sweden, has reigned since 1818. Between 1818 and 1905, it was also the royal house of the Norway...
dynasty
Dynasty
A dynasty is a sequence of rulers considered members of the same family. Historians traditionally consider many sovereign states' history within a framework of successive dynasties, e.g., China, Ancient Egypt and the Persian Empire...
resided there as crown prince (1814-1818) and later as king during his frequent visits to his Norwegian capital.

Charles John chose the site for the permanent Royal Palace on the western side of Christiania in 1821 and commissioned the officer and inexperienced architect
Architect
An architect is a person trained in the planning, design and oversight of the construction of buildings. To practice architecture means to offer or render services in connection with the design and construction of a building, or group of buildings and the space within the site surrounding the...
, Danish
Denmark
Denmark is a Scandinavian country in Northern Europe. The countries of Denmark and Greenland, as well as the Faroe Islands, constitute the Kingdom of Denmark . It is the southernmost of the Nordic countries, southwest of Sweden and south of Norway, and bordered to the south by Germany. Denmark...
-born Linstow
Hans Ditlev Franciscus Linstow
Hans Ditlev Franciscus von Linstow was a Danish-born, Norwegian architect, who is by many considered the first Norwegian architect. He is well-known to have designed the Royal Palace in Oslo and much of the surrounding park and the street Karl Johans gate.-Background:Hans Ditlev Franciscus von...
, to design the building. The Parliament approved the stipulated cost of 150 000 Speciedaler to be financed by the sale of government bonds. Work on the site started in 1824, and on 1 October 1825 the king laid down the foundation stone beneath the altar
Altar
An altar is any structure upon which offerings such as sacrifices are made for religious purposes. Altars are usually found at shrines, and they can be located in temples, churches and other places of worship...
of the future Royal chapel
Chapel
A chapel is a building used by Christians as a place of fellowship and worship. It may be part of a larger structure or complex, such as a church, college, hospital, palace, prison or funeral home, located on board a military or commercial ship, or it may be an entirely free-standing building,...
. Linstow originally planned a building of only two storeys with projecting wings on both sides of the main facade.

The costly foundation works caused the budget to be exceeded, and the building had to stop in 1827, only to be resumed in 1833. In the meantime, the Storting refused additional grants as a demonstration against the king's unpopular efforts to establish a closer union between his two kingdoms. In 1833, Linstow produced a less costly project without the projecting wings, but with a third storey as compensation. Improved relations with the king made the Storting grant the necessary funds to complete the building. The roof was laid in 1836, and the interiors were finished during the late 1840s. King Charles John never had the pleasure of residing in his palace before he died in 1844, and its first occupants were his son Oscar I and his queen Josephine
Josephine of Leuchtenberg
Joséphine of Leuchtenberg was Queen consort of Sweden and Norway as the wife of King Oscar I...
. It was soon found that the royal family needed a more spacious residence, and the wings facing the garden were extended. Before the official inauguration in 1849, the central colonnade
Colonnade
In classical architecture, a colonnade denotes a long sequence of columns joined by their entablature, often free-standing, or part of a building....
that had been axed in 1833 was reintroduced, and the provisional steep roof was replaced by a more elegant and more expensive flat roof.

The next Bernadotte kings Charles IV
Charles IV
Charles IV may refer to:* Charles IV of France, "the Fair" * Charles IV, Holy Roman Emperor * Charles IV of Navarre * Charles IV, Duke of Anjou * Charles IV of Alençon...
and Oscar II
Oscar II
Oscar II may refer to:*Oscar II of Sweden , who ruled Sweden and Norway.*Oscar class submarine, used by the Russian Navy.*Oscar II, Steamship used by Henry Ford for his peace expedition in 1915....
continued to use the Royal Palace in Christiania, but spent most of their time in Stockholm
Stockholm
Stockholm is the capital and the largest city of Sweden and constitutes the most populated urban area in Scandinavia. Stockholm is the most populous city in Sweden, with a population of 851,155 in the municipality , 1.37 million in the urban area , and around 2.1 million in the metropolitan area...
. King Oscar's spouse Sophia preferred to spend summers in Norway, but mostly stayed at the country manor Skinnarbøl near the Swedish border for the sake of her health. Oscar II was absent from his Palace during 1905, the year of the dissolution of the union with Sweden, but his son, Crown Prince Gustaf
Gustaf V of Sweden
Gustaf V was King of Sweden from 1907. He was the eldest son of King Oscar II of Sweden and Sophia of Nassau, a half-sister of Adolphe, Grand Duke of Luxembourg...
, paid two short visits in his vain attempts to save the union. 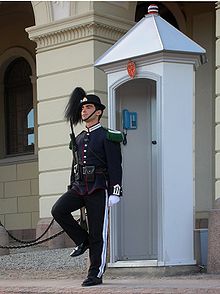 The Bernadotte dynasty resigned their Norwegian throne in 1905 and was succeeded by the Danish prince Carl, who took the name of Haakon VII
Haakon VII
Haakon VII may refer to:People* Haakon VII of Norway , King of Norway Ships* HNoMS King Haakon VII, a Royal Norwegian Navy escort ship in commission from 1942 to 1951...
when he accepted his election as king of completely independent Norway. He was the first monarch to use the Palace as his permanent residence.

During the reign and residence of King Olav V from 1957 to 1991, the Royal Palace was not renovated and insufficiently kept up. When the current monarch, King Harald V
Harald V of Norway
Harald V is the king of Norway. He succeeded to the throne of Norway upon the death of his father Olav V on 17 January 1991...
, started a comprehensive renovation project, he was criticized due to the amount of money needed to bring the Palace up to a satisfactory state. Since public tours began in 2002, the general public has been able to view and appreciate the renovation and splendour that the palace now boasts.