Encyclopedia
Rendsburg is a town on the River Eider and the Kiel Canal
Kiel Canal
The Kiel Canal , known as the Kaiser-Wilhelm-Kanal until 1948, is a long canal in the German state of Schleswig-Holstein.The canal links the North Sea at Brunsbüttel to the Baltic Sea at Kiel-Holtenau. An average of is saved by using the Kiel Canal instead of going around the Jutland Peninsula....
in the northeastern part of Schleswig-Holstein
Schleswig-Holstein
Schleswig-Holstein is the northernmost of the sixteen states of Germany, comprising most of the historical duchy of Holstein and the southern part of the former Duchy of Schleswig...
, Germany
Germany
Germany , officially the Federal Republic of Germany , is a federal parliamentary republic in Europe. The country consists of 16 states while the capital and largest city is Berlin. Germany covers an area of 357,021 km2 and has a largely temperate seasonal climate...
. It is the capital of the Kreis (district) of Rendsburg-Eckernförde. As of 2006, it had a population of 28,476. 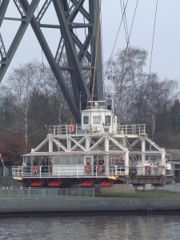 Rendsburg's foundation date is unknown. Rendsburg was first mentioned in 1199. An old form of its name was Reynoldsburgh.

Although the Eider is navigable for small craft from its mouth on the North Sea
North Sea
In the southwest, beyond the Straits of Dover, the North Sea becomes the English Channel connecting to the Atlantic Ocean. In the east, it connects to the Baltic Sea via the Skagerrak and Kattegat, narrow straits that separate Denmark from Norway and Sweden respectively...
to Rendsburg, the town's importance rose in 1895, when the Kiel Canal
Kiel Canal
The Kiel Canal , known as the Kaiser-Wilhelm-Kanal until 1948, is a long canal in the German state of Schleswig-Holstein.The canal links the North Sea at Brunsbüttel to the Baltic Sea at Kiel-Holtenau. An average of is saved by using the Kiel Canal instead of going around the Jutland Peninsula....
was finished. The much larger ships that could navigate the Kiel Canal meant that, although situated inland, Rendsburg became a seaport and a dockyard.

The most prominent structure in town, the Rendsburg High Bridge
Rendsburg High Bridge
The Rendsburg High Bridge is a railway viaduct on the Neumünster–Flensburg line that also serves as a transporter bridge. The bridge crosses the Kiel Canal at Rendsburg in the German state of Schleswig-Holstein...
,
a railway bridge made of steel, 2,500m in length and 41m in height, was constructed in 1913 to take the Neumünster–Flensburg railway over the Kiel Canal
Kiel Canal
The Kiel Canal , known as the Kaiser-Wilhelm-Kanal until 1948, is a long canal in the German state of Schleswig-Holstein.The canal links the North Sea at Brunsbüttel to the Baltic Sea at Kiel-Holtenau. An average of is saved by using the Kiel Canal instead of going around the Jutland Peninsula....
from the relatively flat land on either side. It is the longest railway bridge in Europe: on the northern side, the bridge connects to the Rendsburg Loop
Rendsburg Loop
The Rendsburg Loop is an elevated spiral railway in Rendsburg in the German state of Schleswig-Holstein, connecting the Rendsburg High Bridge over the Kiel Canal on the Neumünster–Flensburg line to Rendsburg station.-Construction:...
to gain height and to allow trains to continue to serve the Rendsburg station
Rendsburg station
Rendsburg station is located in the city of Rendsburg in the German state of Schleswig-Holstein and is at the junction of the Neumünster–Flensburg and Rendsburg Kiel lines. It is currently operated by Deutsche Bahn, which classifies it as a category 4 station. There used to be a direct line from...
. Suspended from the railway bridge, a transporter bridge
Transporter bridge
A transporter bridge is a type of movable bridge that carries a segment of roadway across a river. The gondola is slung from a tall span by wires or a metal frame. The design has been used to cross navigable rivers or other bodies of water, where there is a requirement for ship traffic to be...
- one of only twenty ever built - traverses the canal.

The German Army's
German Army
The German Army is the land component of the armed forces of the Federal Republic of Germany. Following the disbanding of the Wehrmacht after World War II, it was re-established in 1955 as the Bundesheer, part of the newly formed West German Bundeswehr along with the Navy and the Air Force...
Air Defence School and the Bundesamt für Strahlenschutz
Bundesamt für Strahlenschutz
The Bundesamt für Strahlenschutz is the German Federal Authority for Radiation Protection. The BfS was established in November 1989, the headquarter is located in Salzgitter, with branch offices in Berlin, Bonn, Freiburg, Gorleben, Oberschleißheim and Rendsburg. It has 708 employees and an annual...
are both located in Rendsburg.

Rendsburg is twinned with
Town twinning
Twin towns and sister cities are two of many terms used to describe the cooperative agreements between towns, cities, and even counties in geographically and politically distinct areas to promote cultural and commercial ties.- Terminology :...
:
Lancaster
Lancaster, Lancashire
Lancaster is the county town of Lancashire, England. It is situated on the River Lune and has a population of 45,952. Lancaster is a constituent settlement of the wider City of Lancaster, local government district which has a population of 133,914 and encompasses several outlying towns, including...
, United Kingdom
United Kingdom
The United Kingdom of Great Britain and Northern IrelandIn the United Kingdom and Dependencies, other languages have been officially recognised as legitimate autochthonous languages under the European Charter for Regional or Minority Languages...
, since 1950 Vierzon
Vierzon
Vierzon is a commune in the Cher department in the Centre region of France.-Geography:A medium-sized town by the banks of the Cher River with some light industry and an area of forestry and farming to the north...
, France
France
The French Republic , The French Republic , The French Republic , (commonly known as France , is a unitary semi-presidential republic in Western Europe with several overseas territories and islands located on other continents and in the Indian, Pacific, and Atlantic oceans. Metropolitan France...
, since 1954 Aalborg
Aalborg
-Transport:On the north side of the Limfjord is Nørresundby, which is connected to Aalborg by a road bridge Limfjordsbroen, an iron railway bridge Jernbanebroen over Limfjorden, as well as a motorway tunnel running under the Limfjord Limfjordstunnelen....
, Denmark
Denmark
Denmark is a Scandinavian country in Northern Europe. The countries of Denmark and Greenland, as well as the Faroe Islands, constitute the Kingdom of Denmark . It is the southernmost of the Nordic countries, southwest of Sweden and south of Norway, and bordered to the south by Germany. Denmark...
, since 1967 Haapsalu
Haapsalu
Haapsalu is a seaside resort town located on the west coast of Estonia. It's the administrative centre of Lääne County and has a population of 11,618 ....
, Estonia
Estonia
Estonia , officially the Republic of Estonia , is a state in the Baltic region of Northern Europe. It is bordered to the north by the Gulf of Finland, to the west by the Baltic Sea, to the south by Latvia , and to the east by Lake Peipsi and the Russian Federation . Across the Baltic Sea lies...
, since 1989 Kristianstad
Kristianstad
Kristianstad is a city and the seat of Kristianstad Municipality, Skåne County, Sweden with 35,711 inhabitants in 2010.-History:The city was founded in 1614 by King Christian IV of Denmark, the city's name literally means 'Town of Christian', as a planned city after the burning of the town of Vä...
, Sweden
Sweden
Sweden , officially the Kingdom of Sweden , is a Nordic country on the Scandinavian Peninsula in Northern Europe. Sweden borders with Norway and Finland and is connected to Denmark by a bridge-tunnel across the Öresund....
, since 1992 Skien
Skien
' is a city and municipality in Telemark county, Norway. It is part of the traditional region of Grenland. The administrative centre of the municipality is the city of Skien. Skien is also the administrative centre of Telemark county....
, Norway
Norway
Norway , officially the Kingdom of Norway, is a Nordic unitary constitutional monarchy whose territory comprises the western portion of the Scandinavian Peninsula, Jan Mayen, and the Arctic archipelago of Svalbard and Bouvet Island. Norway has a total area of and a population of about 4.9 million...
, since 1995 Rathenow
Rathenow
Rathenow is a town in the district of Havelland in Brandenburg, Germany, with a population of 26,433 .-Overview:The Protestant church of St. Marien Andreas, originally a basilica, and transformed to the Gothic style in 1517-1589, and the Roman Catholic Church of St...
, Germany, since 1989

Rendsbug has also friendship agreements with:
Almere
Almere
Almere is a planned city and municipality in the province of Flevoland, the Netherlands, bordering Lelystad and Zeewolde. The municipality of Almere comprises the districts Almere Stad, Almere Haven, Almere Buiten, Almere Hout, Almere Poort and Almere Pampus .Almere is the youngest city in the...
, Netherlands
Netherlands
The Netherlands is a constituent country of the Kingdom of the Netherlands, located mainly in North-West Europe and with several islands in the Caribbean. Mainland Netherlands borders the North Sea to the north and west, Belgium to the south, and Germany to the east, and shares maritime borders...
, since 1994 Piteå
Piteå
Piteå is a locality and the seat of Piteå Municipality in Norrbotten County, Sweden. The town has 22,650 inhabitants out of a municipal total of 41,000 in 2008.- Geography :...
, Sweden, since 1978 Racibórz
Racibórz
Racibórz is a town in southern Poland with 60,218 inhabitants situated in the Silesian Voivodeship , previously in Katowice Voivodeship...
, Poland
Poland
Poland , officially the Republic of Poland , is a country in Central Europe bordered by Germany to the west; the Czech Republic and Slovakia to the south; Ukraine, Belarus and Lithuania to the east; and the Baltic Sea and Kaliningrad Oblast, a Russian exclave, to the north...
, since 1995
The source of this article is wikipedia, the free encyclopedia.  The text of this article is licensed under the GFDL.