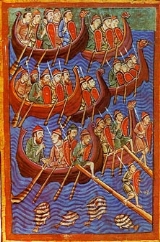 The term Viking is customarily used to refer to the Norse
Norsemen
Norsemen is used to refer to the group of people as a whole who spoke what is now called the Old Norse language belonging to the North Germanic branch of Indo-European languages, especially Norwegian, Icelandic, Faroese, Swedish and Danish in their earlier forms.The meaning of Norseman was "people...
(Scandinavian
Scandinavians
Scandinavians are a group of Germanic peoples, inhabiting Scandinavia and to a lesser extent countries associated with Scandinavia, and speaking Scandinavian languages. The group includes Danes, Norwegians and Swedes, and additionally the descendants of Scandinavian settlers such as the Icelandic...
) explorers, warrior
Warrior
A warrior is a person skilled in combat or warfare, especially within the context of a tribal or clan-based society that recognizes a separate warrior class.-Warrior classes in tribal culture:...
s, merchants, and pirates
Piracy
Piracy is an act of robbery or criminal violence at sea. The term can include acts committed on land, in the air, or in other major bodies of water or on a shore. It does not normally include crimes committed against persons traveling on the same vessel as the perpetrator...
who raided, traded, explored and settled in wide areas of Europe
Europe
Europe is, by convention, one of the world's seven continents. Comprising the westernmost peninsula of Eurasia, Europe is generally 'divided' from Asia to its east by the watershed divides of the Ural and Caucasus Mountains, the Ural River, the Caspian and Black Seas, and the waterways connecting...
, Asia
Asia
Asia is the world's largest and most populous continent, located primarily in the eastern and northern hemispheres. It covers 8.7% of the Earth's total surface area and with approximately 3.879 billion people, it hosts 60% of the world's current human population...
and the North Atlantic islands from the late 8th to the mid-11th century.

These Norsemen
Norsemen
Norsemen is used to refer to the group of people as a whole who spoke what is now called the Old Norse language belonging to the North Germanic branch of Indo-European languages, especially Norwegian, Icelandic, Faroese, Swedish and Danish in their earlier forms.The meaning of Norseman was "people...
used their famed longship
Longship
Longships were sea vessels made and used by the Vikings from the Nordic countries for trade, commerce, exploration, and warfare during the Viking Age. The longship’s design evolved over many years, beginning in the Stone Age with the invention of the umiak and continuing up to the 9th century with...
s to travel as far east as Constantinople
Constantinople
Constantinople was the capital of the Roman, Eastern Roman, Byzantine, Latin, and Ottoman Empires. Throughout most of the Middle Ages, Constantinople was Europe's largest and wealthiest city.-Names:...
and the Volga River
Volga River
The Volga is the largest river in Europe in terms of length, discharge, and watershed. It flows through central Russia, and is widely viewed as the national river of Russia. Out of the twenty largest cities of Russia, eleven, including the capital Moscow, are situated in the Volga's drainage...
in Russia
Russia
Russia or , officially known as both Russia and the Russian Federation , is a country in northern Eurasia. It is a federal semi-presidential republic, comprising 83 federal subjects...
, and as far west as Iceland
Iceland
Iceland , described as the Republic of Iceland, is a Nordic and European island country in the North Atlantic Ocean, on the Mid-Atlantic Ridge. Iceland also refers to the main island of the country, which contains almost all the population and almost all the land area. The country has a population...
, Greenland
Greenland
Greenland is an autonomous country within the Kingdom of Denmark, located between the Arctic and Atlantic Oceans, east of the Canadian Arctic Archipelago. Though physiographically a part of the continent of North America, Greenland has been politically and culturally associated with Europe for...
, and Newfoundland, and as far south as Al-Andalus
Al-Andalus
Al-Andalus was the Arabic name given to a nation and territorial region also commonly referred to as Moorish Iberia. The name describes parts of the Iberian Peninsula and Septimania governed by Muslims , at various times in the period between 711 and 1492, although the territorial boundaries...
.

What where the vinkins accomplishments

Political push and pull factors of the vikings. the postclassical era, 500 to 1000 c.e

Who is 21 century yngling family member.Is there any persons left who carry acient ynglings blood?

What were the the political impacts of the vikings?.
More

What factors led to the decline of the Viking Age?
More

845    Paris is sacked by Viking raiders, probably under Ragnar Lodbrok, who collects a huge ransom in exchange for leaving.

991    Battle of Maldon: the English, led by Byrhtnoth, Ealdorman of Essex, are defeated by a band of inland-raiding Vikings near Maldon in Essex.

1014    Battle of Clontarf: Brian Boru defeats Viking invaders, but is killed in battle.