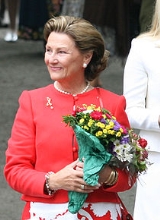 Queen Sonja of Norway (née
NEE
NEE is a political protest group whose goal was to provide an alternative for voters who are unhappy with all political parties at hand in Belgium, where voting is compulsory.The NEE party was founded in 2005 in Antwerp...
Sonja Haraldsen, born 4 July 1937) is the wife
Queen consort
A queen consort is the wife of a reigning king. A queen consort usually shares her husband's rank and holds the feminine equivalent of the king's monarchical titles. Historically, queens consort do not share the king regnant's political and military powers. Most queens in history were queens consort...
of King Harald V of Norway
Harald V of Norway
Harald V is the king of Norway. He succeeded to the throne of Norway upon the death of his father Olav V on 17 January 1991...
.

Queen Sonja grew up in the district of Vinderen in Oslo and completed her lower secondary schooling in 1954. She received a diploma in dressmaking and tailoring at the Oslo Vocational School, as well as a diploma from École Professionelle des Jeunes Filles in Lausanne, Switzerland
Switzerland
Switzerland name of one of the Swiss cantons. ; ; ; or ), in its full name the Swiss Confederation , is a federal republic consisting of 26 cantons, with Bern as the seat of the federal authorities. The country is situated in Western Europe,Or Central Europe depending on the definition....
. There, she studied accounting, fashion design, and social science.

She returned to Norway for further studies and received an undergraduate degree (French
French language
French is a Romance language spoken as a first language in France, the Romandy region in Switzerland, Wallonia and Brussels in Belgium, Monaco, the regions of Quebec and Acadia in Canada, and by various communities elsewhere. Second-language speakers of French are distributed throughout many parts...
, English
English language
English is a West Germanic language that arose in the Anglo-Saxon kingdoms of England and spread into what was to become south-east Scotland under the influence of the Anglian medieval kingdom of Northumbria...
and Art History
Art history
Art history has historically been understood as the academic study of objects of art in their historical development and stylistic contexts, i.e. genre, design, format, and style...
) from the University of Oslo
University of Oslo
The University of Oslo , formerly The Royal Frederick University , is the oldest and largest university in Norway, situated in the Norwegian capital of Oslo. The university was founded in 1811 and was modelled after the recently established University of Berlin...
.


As Crown Princess of Norway

She became engaged to then Crown Prince Harald in March 1968. They had been dating for nine years, although this had been kept secret because of opposition to her non-royal status. The Crown Prince made it clear to his father, King Olav V
Olav V of Norway
Olav V was the king of Norway from 1957 until his death. A member of the House of Schleswig-Holstein-Sonderburg-Glücksburg, Olav was born in the United Kingdom as the son of King Haakon VII of Norway and Queen Maud of Norway...
, that he would remain unmarried for life unless he could marry her. This would in effect have put an end to the rule of his family and probably to the monarchy in Norway, as he was the sole heir to the throne. Faced with having to choose one of his relatives from the Danish Royal Family
Danish Royal Family
The Danish Royal Family includes the Queen of Denmark and her family. All members except the Queen hold the title of Prince/Princess of Denmark with the style of His/Her Royal Highness or His/Her Highness. The Queen is styled Her Majesty. The Queen and her siblings belong to the House of...
, the Dukes of Schleswig-Holstein or even the Grand Dukes of Oldenburg as his new heir in place of his son, Olav V consulted the government for advice and the result was that the couple were wed on 29 August 1968, at Oslo Domkirke in Oslo
Oslo
Oslo is a municipality, as well as the capital and most populous city in Norway. As a municipality , it was established on 1 January 1838. Founded around 1048 by King Harald III of Norway, the city was largely destroyed by fire in 1624. The city was moved under the reign of Denmark–Norway's King...
. She thus acquired the style of Royal Highness
Royal Highness
Royal Highness is a style ; plural Royal Highnesses...
and the title of Crown Princess of Norway.

Immediately after the wedding, the new Crown Princess began to carry out her royal duties, traveling extensively in Norway and abroad. In 1972 she was involved in establishing Princess Märtha Louise’s Fund, which provides assistance to disabled children in Norway. She has taken active part in large-scale initiatives to raise funds for international refugees and spent time in the 1970s visiting Vietnamese
Vietnamese people
The Vietnamese people are an ethnic group originating from present-day northern Vietnam and southern China. They are the majority ethnic group of Vietnam, comprising 86% of the population as of the 1999 census, and are officially known as Kinh to distinguish them from other ethnic groups in Vietnam...
boat refugees in Malaysia.

From 1987 to 1990, Crown Princess Sonja served as Vice President of the Norwegian Red Cross
Norwegian Red Cross
The Norwegian Red Cross was founded September 22, 1865 by prime minister Frederik Stang. In 1907 the Norwegian Ministry of Defence authorized the organization for voluntary medical aid in war...
. She was responsible for the organisation’s international activities. She took part in a Red Cross delegation to Botswana
Botswana
Botswana, officially the Republic of Botswana , is a landlocked country located in Southern Africa. The citizens are referred to as "Batswana" . Formerly the British protectorate of Bechuanaland, Botswana adopted its new name after becoming independent within the Commonwealth on 30 September 1966...
and Zimbabwe
Zimbabwe
Zimbabwe is a landlocked country located in the southern part of the African continent, between the Zambezi and Limpopo rivers. It is bordered by South Africa to the south, Botswana to the southwest, Zambia and a tip of Namibia to the northwest and Mozambique to the east. Zimbabwe has three...
in 1989.

The then-Crown Princess Sonja established this music competition in 1988. It was originally for pianists, but in 1995 the competition became only for singers. The jury consists of diverse authoritative figures in opera and the winners receive a cash amount and prestigious engagements at Norwegian music institutions.

Following the death of King Olav V on 17 January 1991, Sonja became Norway's first queen consort
Queen consort
A queen consort is the wife of a reigning king. A queen consort usually shares her husband's rank and holds the feminine equivalent of the king's monarchical titles. Historically, queens consort do not share the king regnant's political and military powers. Most queens in history were queens consort...
in 53 years. Queen Sonja accompanied King Harald V when he swore his oath to uphold the Constitution in the Storting on 21 January 1991. It was the first time in 69 years that a Norwegian queen had been present in the Storting. Queen Sonja has accompanied the King to the formal opening of the fall session of the Storting and the reading of the Speech from the Throne since his accession.

In accordance with their own wishes, the King and Queen were consecrated
Consecration
Consecration is the solemn dedication to a special purpose or service, usually religious. The word "consecration" literally means "to associate with the sacred". Persons, places, or things can be consecrated, and the term is used in various ways by different groups...
in Nidaros Cathedral
Nidaros Cathedral
Nidaros Cathedral is a Church of Norway cathedral located in the city of Trondheim in Sør-Trøndelag county, Norway. It was the cathedral of the Roman Catholic Archdiocese of Nidaros from its establishment in 1152 until its abolition in 1537. Since the Reformation, it has been the cathedral of the...
in Trondheim on 23 June 1991. Following the consecration, the King and Queen conducted a 10-day tour of Southern Norway. In 1992, the entire Royal Family conducted a 22-day tour of Norway’s four northernmost counties.

In 2005, Queen Sonja became the first queen ever to visit Antarctica. The Queen was there to open the Norwegian Troll research station
Troll (research station)
Troll is a research station located at Jutulsessen, from the coast in the eastern part of Princess Martha Coast in Queen Maud Land, Antarctica. It is Norway's only all-year research station in Antarctica, and is supplemented by the summer-only station Tor...
in the country's Antarctic dependency, Queen Maud Land
Queen Maud Land
Queen Maud Land is a c. 2.7 million-square-kilometre region of Antarctica claimed as a dependent territory by Norway. The territory lies between 20° west and 45° east, between the British Antarctic Territory to the west and the Australian Antarctic Territory to the east. The latitudinal...
. The Queen flew in on one of the Royal Norwegian Air Force's
Royal Norwegian Air Force
The Royal Norwegian Air Force is the air force of Norway. It was established as a separate arm of the Norwegian armed forces on 10 November 1944. The RNoAF's peace force is approximately 1,430 employees . 600 personnel also serve their draft period in the RNoAF...
C-130H Hercules transport aircraft
Military transport aircraft
Military transport aircraft are typically fixed and rotary wing cargo aircraft which are used to deliver troops, weapons and other military equipment by a variety of methods to any area of military operations around the surface of the planet, usually outside of the commercial flight routes in...
, landing at Troll airfield
Troll airfield
Troll Airfield is an airstrip located from the research station Troll in Princess Martha Coast in Queen Maud Land, Antarctica. Owned and operated by the Norwegian Polar Institute, it consists of a runway on glacial blue ice on the Antarctic ice sheet...
.

The Queen is appointed a Rear Admiral in the Royal Norwegian Navy
Royal Norwegian Navy
The Royal Norwegian Navy is the branch of the Norwegian Defence Force responsible for naval operations. , the RNoN consists of approximately 3,700 personnel and 70 vessels, including 5 heavy frigates, 6 submarines, 14 patrol boats, 4 minesweepers, 4 minehunters, 1 mine detection vessel, 4 support...
and a Brigadier in the Norwegian army
Norwegian Army
Norway achieved full independence in 1905, and in the first century of its short life has contributed to two major conflicts, the Cold War and the War on Terror. The Norwegian Army currently operates in the north of Norway and in Afghanistan as well as in Eastern Europe. The Army is the oldest of...
. She has undergone a basic officer training course and has participated in exercises.

Queen Sonja’s School Award was established in 2006 and is awarded to schools who have "demonstrated excellence in its efforts to promote inclusion and equality".