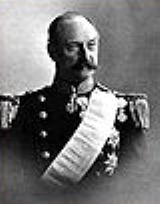 Encyclopedia
Frederick VIII (3 June 1843 – 14 May 1912) was King of Denmark
Denmark
Denmark is a Scandinavian country in Northern Europe. The countries of Denmark and Greenland, as well as the Faroe Islands, constitute the Kingdom of Denmark . It is the southernmost of the Nordic countries, southwest of Sweden and south of Norway, and bordered to the south by Germany. Denmark...
from 1906 to 1912.

In 1864, he formally took part in the Second Schleswig War against Austria
Austria
Austria , officially the Republic of Austria , is a landlocked country of roughly 8.4 million people in Central Europe. It is bordered by the Czech Republic and Germany to the north, Slovakia and Hungary to the east, Slovenia and Italy to the south, and Switzerland and Liechtenstein to the...
and Prussia
Prussia
Prussia was a German kingdom and historic state originating out of the Duchy of Prussia and the Margraviate of Brandenburg. For centuries, the House of Hohenzollern ruled Prussia, successfully expanding its size by way of an unusually well-organized and effective army. Prussia shaped the history...
. 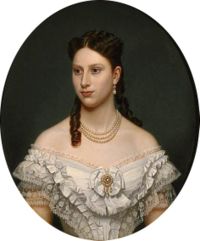 In July 1868, Frederick became engaged to Princess Louise of Sweden, the 17-year-old only daughter of King Charles XV of Sweden and Norway
Charles XV of Sweden
Charles XV & IV also Carl ; Swedish and Norwegian: Karl was King of Sweden and Norway from 1859 until his death....
. Princess Louise's family was related by marriage to Napoleon Bonaparte. She belonged to the Bernadotte dynasty, which had ruled in Sweden since 1818, when the founder, Jean-Baptiste Bernadotte, one of Napoleon's generals, was elected King of Sweden with the name of Charles XIV of Sweden. He married Désirée Clary
Désirée Clary
Bernardine Eugénie Désirée Clary , one-time fiancée of Napoleon Bonaparte, was a Frenchwoman who became Queen of Sweden and Norway as the consort of King Charles XIV John, a former French General. She officially changed her name there to Desideria, a Latin version of her original name...
, who had once been engaged to the French Emperor. Charles XIV's son, Oscar I of Sweden
Oscar I of Sweden
Oscar I was King of Sweden and Norway from 1844 to his death. When, in August 1810, his father Jean-Baptiste Bernadotte was elected Crown Prince of Sweden, Oscar and his mother moved from Paris to Stockholm . Oscar's father was the first ruler of the current House of Bernadotte...
, married Josephine of Leuchtenberg
Josephine of Leuchtenberg
Joséphine of Leuchtenberg was Queen consort of Sweden and Norway as the wife of King Oscar I...
, grandddaughter of Napoleon's first wife, the Empress Josephine. King Oscar I and Queen Josephine were Princess Louise's paternal grandparents.

The marriage was suggested as a way of creating friendship between Denmark and Sweden. The two countries were in a tense situation after Sweden had not assisted Denmark during the war with Prussia
Prussia
Prussia was a German kingdom and historic state originating out of the Duchy of Prussia and the Margraviate of Brandenburg. For centuries, the House of Hohenzollern ruled Prussia, successfully expanding its size by way of an unusually well-organized and effective army. Prussia shaped the history...
and Austria
Austria
Austria , officially the Republic of Austria , is a landlocked country of roughly 8.4 million people in Central Europe. It is bordered by the Czech Republic and Germany to the north, Slovakia and Hungary to the east, Slovenia and Italy to the south, and Switzerland and Liechtenstein to the...
in 1864. Frederick and Louise had met for the first time in 1862, but in 1868 Frederick was invited to Sweden to get to know Louise, and their meeting was described as a success. They became engaged the same year. She was the first Swedish princess to be married in to the Danish royal house since the middle ages, and the marriage was welcomed in all three Scandinavian countries as a symbol of the new Scandinavism
Scandinavism
Scandinavism and Nordism are literary and political movements that support various degrees of cooperation between the Scandinavian or Nordic countries...
.

Crown Prince Frederick and Louise of Sweden married at the Royal Palace in Stockholm on 28 July 1869. The couple resided at Amalienborg Palace
Amalienborg Palace
Amalienborg Palace is the winter home of the Danish royal family, and is located in Copenhagen, Denmark. It consists of four identical classicizing palace façades with rococo interiors around an octagonal courtyard ; in the centre of the square is a monumental equestrian statue of Amalienborg's...
in Copenhagen
Copenhagen
Copenhagen is the capital and largest city of Denmark, with an urban population of 1,199,224 and a metropolitan population of 1,930,260 . With the completion of the transnational Øresund Bridge in 2000, Copenhagen has become the centre of the increasingly integrating Øresund Region...
, spending the summers at Charlottenlund Palace north of the city. They had four sons and four daughters. The marriage was not a happy one, nor did it have any effect on the relationship between the two countries.

Frederick became king of Denmark as Frederick VIII on Christian IX's death on 29 January 1906. He was 62 years old at the time and had been Crown Prince for 43 years.

In many ways Frederick VIII was a liberal ruler who was much more favorable to the new parliamentarian system than his father had been. Because of his very late accession to the throne he only had a few years to show his ability and he was weakened by ill health.

On his return journey from Nice
Nice
Nice is the fifth most populous city in France, after Paris, Marseille, Lyon and Toulouse, with a population of 348,721 within its administrative limits on a land area of . The urban area of Nice extends beyond the administrative city limits with a population of more than 955,000 on an area of...
a trip to France, King Frederick made a short stop in Hamburg
Hamburg
-History:The first historic name for the city was, according to Claudius Ptolemy's reports, Treva.But the city takes its modern name, Hamburg, from the first permanent building on the site, a castle whose construction was ordered by the Emperor Charlemagne in AD 808...
, staying at the Hotel Hamburger Hof. The evening of his arrival, Frederick (incognito) took a walk on the Jungfernstieg. While walking he became faint and collapsed on a park bench and died. He was discovered by a police officer who took him to a Hafen hospital where he was pronounced dead. His cause of death was announced as a paralysis-attack. He was interred with other members of the Danish royal family in Roskilde Cathedral
Roskilde Cathedral
Roskilde Cathedral , in the city of Roskilde on the island of Zealand in eastern Denmark, is a cathedral of the Lutheran Church of Denmark. The first Gothic cathedral to be built of brick, it encouraged the spread of the Brick Gothic style throughout Northern Europe...
near Copenhagen
Copenhagen
Copenhagen is the capital and largest city of Denmark, with an urban population of 1,199,224 and a metropolitan population of 1,930,260 . With the completion of the transnational Øresund Bridge in 2000, Copenhagen has become the centre of the increasingly integrating Øresund Region...
.

The royal families of Denmark, Norway
Norway
Norway , officially the Kingdom of Norway, is a Nordic unitary constitutional monarchy whose territory comprises the western portion of the Scandinavian Peninsula, Jan Mayen, and the Arctic archipelago of Svalbard and Bouvet Island. Norway has a total area of and a population of about 4.9 million...
, Belgium
Belgium
Belgium , officially the Kingdom of Belgium, is a federal state in Western Europe. It is a founding member of the European Union and hosts the EU's headquarters, and those of several other major international organisations such as NATO.Belgium is also a member of, or affiliated to, many...
and Luxembourg
Luxembourg
Luxembourg , officially the Grand Duchy of Luxembourg , is a landlocked country in western Europe, bordered by Belgium, France, and Germany. It has two principal regions: the Oesling in the North as part of the Ardennes massif, and the Gutland in the south...
are descended from King Frederick VIII. Denmark comes naturally, Norway's family goes through the line of his son, Prince Carl, and the families of Belgium and Luxembourg are descended from his daughter, Princess Ingeborg of Denmark
Princess Ingeborg of Denmark
Princess Ingeborg of Denmark was a Danish princess and a Swedish princess consort...
.

Frederick VIII was the 1,065th Knight
Knight
A knight was a member of a class of lower nobility in the High Middle Ages.By the Late Middle Ages, the rank had become associated with the ideals of chivalry, a code of conduct for the perfect courtly Christian warrior....
of the Order of the Golden Fleece
Order of the Golden Fleece
The Order of the Golden Fleece is an order of chivalry founded in Bruges by Philip III, Duke of Burgundy in 1430, to celebrate his marriage to the Portuguese princess Infanta Isabella of Portugal, daughter of King John I of Portugal. It evolved as one of the most prestigious orders in Europe...
in Spain, the 806th Knight of the Order of the Garter
Order of the Garter
The Most Noble Order of the Garter, founded in 1348, is the highest order of chivalry, or knighthood, existing in England. The order is dedicated to the image and arms of St...
in 1896 and the 152nd Grand Cross
Grand Cross
The phrase Grand Cross is used to denote the highest grade in many orders of knighthood. Sometimes the holders of the highest grade are referred to "knights grand cross" or just "grand crosses"; in other cases the actual insignia itself is called "the grand cross".Alternatively, in some other...
of the Order of the Tower and Sword
Order of the Tower and Sword
The Military Order of the Tower and of the Sword, of Valour, Loyalty and Merit is a Portuguese order of knighthood and the pinnacle of the Portuguese honours system. It was created by King Afonso V in 1459....
.