Encyclopedia
Akershus Fortress or Akershus Castle is a medieval
Middle Ages
The Middle Ages is a periodization of European history from the 5th century to the 15th century. The Middle Ages follows the fall of the Western Roman Empire in 476 and precedes the Early Modern Era. It is the middle period of a three-period division of Western history: Classic, Medieval and Modern...
castle
Castle
A castle is a type of fortified structure built in Europe and the Middle East during the Middle Ages by European nobility. Scholars debate the scope of the word castle, but usually consider it to be the private fortified residence of a lord or noble...
that was built to protect Oslo
Oslo
Oslo is a municipality, as well as the capital and most populous city in Norway. As a municipality , it was established on 1 January 1838. Founded around 1048 by King Harald III of Norway, the city was largely destroyed by fire in 1624. The city was moved under the reign of Denmark–Norway's King...
, the capital of Norway
Norway
Norway , officially the Kingdom of Norway, is a Nordic unitary constitutional monarchy whose territory comprises the western portion of the Scandinavian Peninsula, Jan Mayen, and the Arctic archipelago of Svalbard and Bouvet Island. Norway has a total area of and a population of about 4.9 million...
. It has also been used as a prison
Prison
A prison is a place in which people are physically confined and, usually, deprived of a range of personal freedoms. Imprisonment or incarceration is a legal penalty that may be imposed by the state for the commission of a crime...
. 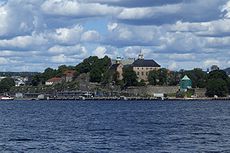 The first construction on the castle started around the late 1290s, by King Haakon V
Haakon V of Norway
Haakon V Magnusson was king of Norway from 1299 until 1319.-Biography:Haakon was the younger surviving son of Magnus the Lawmender, King of Norway, and his wife Ingeborg of Denmark. Haakon was descended from king Saint Olav and is considered to have been the last Norwegian king in the Fairhair...
, replacing Tønsberg
Tønsberg Fortress
Tønsberg Fortress was a medieval fortress, located in Tønsberg, Norway which was defended by the fortress for over 300 years.-History:...
as one of the two most important Norwegian castles of the period (the other being Båhus). It was constructed in response to the Norwegian nobleman, Earl Alv Erlingsson
Alv Erlingsson
Alv Erlingsson was a Norwegian nobleman, jarl of Sarpsborg and governor of Borgarsyssel.Alv Erlingsson was born at Tanberg in Norderhov, Buskerud. Alv Erlingsson was the son of Erling Alvsson of Tanberg and grandson of Alv Erlingsson of Tanberg...
of Sarpsborg
Sarpsborg
is a city and municipality in Østfold county, Norway. The administrative centre of the municipality is the city of Sarpsborg.Sarpsborg is part of the fifth largest urban area in Norway when paired with neighbouring Fredrikstad...
’s earlier attack on Oslo.

The fortress has successfully survived all sieges, primarily by Swedish
Sweden
Sweden , officially the Kingdom of Sweden , is a Nordic country on the Scandinavian Peninsula in Northern Europe. Sweden borders with Norway and Finland and is connected to Denmark by a bridge-tunnel across the Öresund....
forces, also by Karl XII
Charles XII of Sweden
Charles XII also Carl of Sweden, , Latinized to Carolus Rex, Turkish: Demirbaş Şarl, also known as Charles the Habitué was the King of the Swedish Empire from 1697 to 1718...
in 1716. In the early 17th c., the fortress was modernized and remodelled under the reign of the active King Christian IV, and got the appearance of a renaissance castle.

The fortress was first used in battle in 1308, when it was besieged by the Swedish duke Erik
Eric X of Sweden
Eric "X" of Sweden, Swedish: Erik Knutsson; Old Norse: Eiríkr Knútsson was the King of Sweden between 1208 and 1216. Also known as Eric the Survivor when he became King, he was the only remaining son of King Canute I of Sweden and his queen of an undetermined name, who probably was Cecilia...
of Södermanland
Södermanland
', sometimes referred to under its Latin form Sudermannia or Sudermania, is a historical province or landskap on the south eastern coast of Sweden. It borders Östergötland, Närke, Västmanland and Uppland. It is also bounded by lake Mälaren and the Baltic sea.In Swedish, the province name is...
, who later in the same year won the Swedish throne. The immediate proximity of the sea was a key feature, for naval power
Navy
A navy is the branch of a nation's armed forces principally designated for naval and amphibious warfare; namely, lake- or ocean-borne combat operations and related functions...
was a vital military
Military
A military is an organization authorized by its greater society to use lethal force, usually including use of weapons, in defending its country by combating actual or perceived threats. The military may have additional functions of use to its greater society, such as advancing a political agenda e.g...
force
Force
In physics, a force is any influence that causes an object to undergo a change in speed, a change in direction, or a change in shape. In other words, a force is that which can cause an object with mass to change its velocity , i.e., to accelerate, or which can cause a flexible object to deform...
as the majority of Norwegian commerce in that period was by sea. The fortress was strategically important for the capital, and therefore, Norway
Norway
Norway , officially the Kingdom of Norway, is a Nordic unitary constitutional monarchy whose territory comprises the western portion of the Scandinavian Peninsula, Jan Mayen, and the Arctic archipelago of Svalbard and Bouvet Island. Norway has a total area of and a population of about 4.9 million...
as well. Whoever ruled Akershus fortress ruled Norway.

The fortress has never been successfully captured by a foreign enemy. It surrendered without combat to Nazi Germany
Nazi Germany
Nazi Germany , also known as the Third Reich , but officially called German Reich from 1933 to 1943 and Greater German Reich from 26 June 1943 onward, is the name commonly used to refer to the state of Germany from 1933 to 1945, when it was a totalitarian dictatorship ruled by...
in 1940 when the Norwegian government evacuated the capital in the face of the unprovoked German assault on Denmark
Denmark
Denmark is a Scandinavian country in Northern Europe. The countries of Denmark and Greenland, as well as the Faroe Islands, constitute the Kingdom of Denmark . It is the southernmost of the Nordic countries, southwest of Sweden and south of Norway, and bordered to the south by Germany. Denmark...
and Norway (see Operation Weserübung
Operation Weserübung
Operation Weserübung was the code name for Germany's assault on Denmark and Norway during the Second World War and the opening operation of the Norwegian Campaign...
). During World War II, several people were executed here by the German occupiers. After the war, eight Norwegian traitors who had been tried for war crimes and sentenced to death were also executed at the fortress. Among those executed was Vidkun Quisling
Vidkun Quisling
Vidkun Abraham Lauritz Jonssøn Quisling was a Norwegian politician. On 9 April 1940, with the German invasion of Norway in progress, he seized power in a Nazi-backed coup d'etat that garnered him international infamy. From 1942 to 1945 he served as Minister-President, working with the occupying...
.

Akershus has also been a prison, a section of it known as The Slavery as the prisoners could be rented out for work in the city. It has housed many rebels and criminals through Norwegian history. Particularly well-known people to have been imprisoned there includes the semi-legendary "thief of the people
Robin Hood
Robin Hood was a heroic outlaw in English folklore. A highly skilled archer and swordsman, he is known for "robbing from the rich and giving to the poor", assisted by a group of fellow outlaws known as his "Merry Men". Traditionally, Robin Hood and his men are depicted wearing Lincoln green clothes....
" and author Gjest Baardsen (1791–1849), and the similarly idealized thief Ole Høiland. Also, many early Norwegian socialists (supporters of Marcus Thrane
Marcus Thrane
Marcus Møller Thrane was a Norwegian author, journalist, and the leader of the first Norwegian labor movement, later known as the Thrane movement .-Early life:...
, 1817–1890) also spent time in the cells of Akershus.

Following the 1852 Laestadian Sámi revolt in Guovdageaidnu
Sami revolt in Guovdageaidnu
The Sami revolt in Guovdageaidnu, also known as the Kautokeino uprising, was a revolt in the town of Kautokeino in northern Norway in 1852 by a group of Sami who attacked representatives of the Norwegian authorities. The rebels killed the local merchant and the local government official, whipped...
, all men except the two leaders Aslak Hætta
Aslak Hætta
Aslak Jacobsen Hætta was one of the leaders of the Sami revolt in Guovdageaidnu in November 1852. During the riots, the merchant Carl Johan Ruth and the local government official Lars Johan Bucht were killed and the pastor Fredrik Waldemar Hvoslef was whipped...
and Mons Somby
Mons Somby
Mons Aslaksen Somby Somby was one of the leaders of the Sami rioters that attacked several Norwegian shops during the Kautokeino rebellion of 1852. During the uprising a merchant and the town sheriff were killed and others were whipped...
(who were beheaded in Alta
Alta, Norway
-Birdlife:For those interested in bird watching, the river outlet, known locally as Altaosen is well worth a visit. This tidal area is used as a stopover for many wetland species.-Transportation:...
) ended up in Akershus Fortress – the women were imprisoned in Trondheim
Trondheim
Trondheim , historically, Nidaros and Trondhjem, is a city and municipality in Sør-Trøndelag county, Norway. With a population of 173,486, it is the third most populous municipality and city in the country, although the fourth largest metropolitan area. It is the administrative centre of...
. Many of the rebels died after a few years in captivity. Among the survivors was Lars Hætta (18 years at the time of imprisonment), who during his stay was allowed time and means to write the first translation of the Bible
Bible
The Bible refers to any one of the collections of the primary religious texts of Judaism and Christianity. There is no common version of the Bible, as the individual books , their contents and their order vary among denominations...
into North Sámi.

Norwegian Royalty have been buried in the Royal Mausoleum in the castle. They include, King Sigurd I
Sigurd I of Norway
Sigurd I Magnusson , also known as Sigurd the Crusader , was King of Norway from 1103 to 1130. His rule, together with his brother Eystein I of Norway , has been regarded by historians as a golden age for the medieval Kingdom of Norway...
, King Haakon V
Haakon V of Norway
Haakon V Magnusson was king of Norway from 1299 until 1319.-Biography:Haakon was the younger surviving son of Magnus the Lawmender, King of Norway, and his wife Ingeborg of Denmark. Haakon was descended from king Saint Olav and is considered to have been the last Norwegian king in the Fairhair...
, Queen Eufemia
Eufemia of Rügen
Euphemia Güntersdotter of Rügen was the Queen consort of Norway as the spouse of Haakon V of Norway...
, King Haakon VII
Haakon VII of Norway
Haakon VII , known as Prince Carl of Denmark until 1905, was the first king of Norway after the 1905 dissolution of the personal union with Sweden. He was a member of the House of Schleswig-Holstein-Sonderburg-Glücksburg...
, Queen Maud, King Olav V
Olav V of Norway
Olav V was the king of Norway from 1957 until his death. A member of the House of Schleswig-Holstein-Sonderburg-Glücksburg, Olav was born in the United Kingdom as the son of King Haakon VII of Norway and Queen Maud of Norway...
and Crown Princess Märtha.

A portion of the fortress was replicated at the Norway (Epcot)
Norway (Epcot)
The Norway Pavilion is part of the World Showcase within Epcot at the Walt Disney World Resort.-Layout:The Norway pavilion is designed to look like a Norwegian village. The village includes a detailed Stave church, and the exterior of its main table-service restaurant, Restaurant Akershus,...
pavilion at Epcot Center theme park in Orlando, Florida.

The year is that in which they first took command.