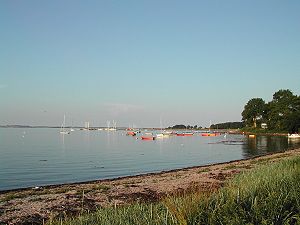 Flensburg Fjord occasionally known as Flensburg Firth, is a 50 km long inlet
Inlet
An inlet is a narrow body of water between islands or leading inland from a larger body of water, often leading to an enclosed body of water, such as a sound, bay, lagoon or marsh. In sea coasts an inlet usually refers to the actual connection between a bay and the ocean and is often called an...
of the Baltic Sea
Baltic Sea
The Baltic Sea is a brackish mediterranean sea located in Northern Europe, from 53°N to 66°N latitude and from 20°E to 26°E longitude. It is bounded by the Scandinavian Peninsula, the mainland of Europe, and the Danish islands. It drains into the Kattegat by way of the Øresund, the Great Belt and...
. The fjord
Fjord
Geologically, a fjord is a long, narrow inlet with steep sides or cliffs, created in a valley carved by glacial activity.-Formation:A fjord is formed when a glacier cuts a U-shaped valley by abrasion of the surrounding bedrock. Glacial melting is accompanied by rebound of Earth's crust as the ice...
or firth
Firth
Firth is the word in the Lowland Scots language and in English used to denote various coastal waters in Scotland and England. In mainland Scotland it is used to describe a large sea bay, or even a strait. In the Northern Isles it more usually refers to a smaller inlet...
forms part of the border between Germany
Germany
Germany , officially the Federal Republic of Germany , is a federal parliamentary republic in Europe. The country consists of 16 states while the capital and largest city is Berlin. Germany covers an area of 357,021 km2 and has a largely temperate seasonal climate...
to the south and Denmark
Denmark
Denmark is a Scandinavian country in Northern Europe. The countries of Denmark and Greenland, as well as the Faroe Islands, constitute the Kingdom of Denmark . It is the southernmost of the Nordic countries, southwest of Sweden and south of Norway, and bordered to the south by Germany. Denmark...
to the north.

On the Danish side lies the island of Als with the town of Sønderborg
Sønderborg
Sønderborg Municipality , is a municipality in Region of Southern Denmark partially on the Jutland peninsula and partially on the island of Als in south Denmark, at the border with Germany. The municipality covers an area of , and has a total population of 76,236...
. Towards the west, continuing on the Danish side are Broager
Broager
Broager is a town with a population of 3,376 in Sønderborg Municipality in Region of Southern Denmark in Denmark. It lies on the Broagerland peninsula, and is therefore surrounded by water on three sides, the waters of Flensborg Fjord leading into the Baltic Sea...
, Egemsund, Gråsten
Gråsten
Gråsten , stress on last syllable) is a town with a population of 4,200 on the east coast of the Jutland peninsula in south Denmark by the Nybøl Nor at an inlet of the Flensburg Fjord. It belongs to the Sønderborg municipality in Region of Southern Denmark...
, Rinkenæs
Rinkenæs
Rinkenæs may refer to:-*Rinkenis, a town in Denmark. , a Danish cargo ship in service 1946-47...
, Sønderhav, and Kollund.

At the inner German side is the town of Flensburg
Flensburg
Flensburg is an independent town in the north of the German state of Schleswig-Holstein. Flensburg is the centre of the region of Southern Schleswig...
. At the eastern shore is the town of Glücksburg
Glücksburg
Glücksburg is a small town in the district Schleswig-Flensburg, in Schleswig-Holstein, Germany.It is situated on the south side of the Flensburg Fjord, an inlet of the Baltic Sea, approx. 10 km northeast of Flensburg...
.