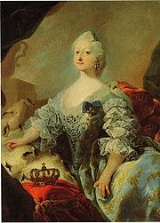 Encyclopedia
Louise of Great Britain (7 December 1724 – 19 December 1751) was the youngest surviving daughter of George II of Great Britain
George II of Great Britain
George II was King of Great Britain and Ireland, Duke of Brunswick-Lüneburg and Archtreasurer and Prince-elector of the Holy Roman Empire from 11 June 1727 until his death.George was the last British monarch born outside Great Britain. He was born and brought up in Northern Germany...
and Caroline of Ansbach
Caroline of Ansbach
Caroline of Brandenburg-Ansbach was the queen consort of King George II of Great Britain.Her father, John Frederick, Margrave of Brandenburg-Ansbach, was the ruler of a small German state...
, and became queen consort
Queen consort
A queen consort is the wife of a reigning king. A queen consort usually shares her husband's rank and holds the feminine equivalent of the king's monarchical titles. Historically, queens consort do not share the king regnant's political and military powers. Most queens in history were queens consort...
of Denmark
Denmark
Denmark is a Scandinavian country in Northern Europe. The countries of Denmark and Greenland, as well as the Faroe Islands, constitute the Kingdom of Denmark . It is the southernmost of the Nordic countries, southwest of Sweden and south of Norway, and bordered to the south by Germany. Denmark...
and Norway
Norway
Norway , officially the Kingdom of Norway, is a Nordic unitary constitutional monarchy whose territory comprises the western portion of the Scandinavian Peninsula, Jan Mayen, and the Arctic archipelago of Svalbard and Bouvet Island. Norway has a total area of and a population of about 4.9 million...
.

Princess Louise was born as the fifth daughter and youngest child of the then Prince and Princess of Wales, on 7 December 1724, at Leicester House
Leicester House
There have been two mansions in London, England called Leicester House:*A house in the Strand near the Temple: Leicester House, Strand. This existed in the Tudor period, and possibly earlier ....
, London
London
London is the capital city of :England and the :United Kingdom, the largest metropolitan area in the United Kingdom, and the largest urban zone in the European Union by most measures. Located on the River Thames, London has been a major settlement for two millennia, its history going back to its...
. She was baptised "Louisa" there on 22 December. Her godparents were her elder sister and two cousins: Princess Amelia of Great Britain, Princess Louisa Ulrika of Prussia
Louisa Ulrika of Prussia
Louisa Ulrika of Prussia was Queen of Sweden between 1751 and 1771 as the spouse of King Adolf Frederick of Sweden, and queen mother during the reign of King Gustav III of Sweden.-Background:...
(for whom Sarah Lennox, Duchess of Richmond and Lennox, stood proxy), and Frederick, Prince Royal of Prussia, later Frederick the Great (for whom Henry de Nassau d'Auverquerque, 1st Earl of Grantham, stood proxy).

On 11 June 1727, when Louise was two years old, her grandfather, George I
George I of Great Britain
George I was King of Great Britain and Ireland from 1 August 1714 until his death, and ruler of the Duchy and Electorate of Brunswick-Lüneburg in the Holy Roman Empire from 1698....
, died, and her father ascended the throne as George II.

In a dynastic marriage, Louise wed Prince Frederick of Denmark and Norway
Frederick V of Denmark
Frederick V was king of Denmark and Norway from 1746, son of Christian VI of Denmark and Sophia Magdalen of Brandenburg-Kulmbach.-Early life:...
on 11 December 1743 at Altona
Altona, Hamburg
Altona is the westernmost urban borough of the German city state of Hamburg, on the right bank of the Elbe river. From 1640 to 1864 Altona was under the administration of the Danish monarchy. Altona was an independent city until 1937...
, Holstein
Holstein
Holstein is the region between the rivers Elbe and Eider. It is part of Schleswig-Holstein, the northernmost state of Germany....
. Frederick's father, King Christian VI
Christian VI of Denmark
Christian VI was King of Denmark and Norway from 1730 to 1746.He was the son of King Frederick IV of Denmark and Norway and Louise of Mecklenburg-Güstrow. He married Sophia Magdalen of Brandenburg-Kulmbach and fathered Frederick V.-The reign and personality of Christian VI:To posterity Christian...
, hoped the marriage would lead to British support for his or his son's claim to the throne of Sweden. The couple had five children, one of whom did not survive birth. Although the marriage was arranged, the couple got along quite well. Frederick was comfortable with her, and Louise pretended not to notice his adultery.

When her husband ascended the throne, on 6 August 1746, as Frederick V, Louise became Queen
Queen consort
A queen consort is the wife of a reigning king. A queen consort usually shares her husband's rank and holds the feminine equivalent of the king's monarchical titles. Historically, queens consort do not share the king regnant's political and military powers. Most queens in history were queens consort...
of Denmark and Queen of Norway.

Queen Louise was very popular in Denmark, and it is estimated that her popularity also made her husband popular. Interested in music
Music
Music is an art form whose medium is sound and silence. Its common elements are pitch , rhythm , dynamics, and the sonic qualities of timbre and texture...
, dance
Dance
Dance is an art form that generally refers to movement of the body, usually rhythmic and to music, used as a form of expression, social interaction or presented in a spiritual or performance setting....
and theatre
Theatre
Theatre is a collaborative form of fine art that uses live performers to present the experience of a real or imagined event before a live audience in a specific place. The performers may communicate this experience to the audience through combinations of gesture, speech, song, music or dance...
, the royal court was given a more easy going tone than under her strictly religious parents-in-law. Louise had a vivacious personality, allowing her to easily socialize with others. In 1747, she arranged for the Italian
Italy
Italy , officially the Italian Republic languages]] under the European Charter for Regional or Minority Languages. In each of these, Italy's official name is as follows:;;;;;;;;), is a unitary parliamentary republic in South-Central Europe. To the north it borders France, Switzerland, Austria and...
opera
Opera
Opera is an art form in which singers and musicians perform a dramatic work combining text and musical score, usually in a theatrical setting. Opera incorporates many of the elements of spoken theatre, such as acting, scenery, and costumes and sometimes includes dance...
company of Pietro Mingotti
Pietro Mingotti
Pietro Mingotti was an Italian impresario active across continental Europe. His brother, Angelo, formed an opera company in Prague around 1732, consisting of 3 male singers and 5 females; Pietro quickly followed suit, and the two troupes achieved Europe-wide success , sometimes performing together...
to play at the royal court theatre, and in 1748, the French Du Londel Troupe
Du Londel Troupe
The Du Londel Troupe was a French 18th-century theatre troupe. From 1753 to 1771, it was active as the French Theatre of Sweden, where it played a great part in that country's theatre history....
was invited for dramatic performances. She was very appreciated for her effort to speak the Danish language, as the royal Danish court was mostly German to its language, and her effort to speak Danish with her children became much appreciated. She was described as well educated and good at conversation, not beautiful but very dignified and well suited in her part as a queen.

While pregnant with her sixth child, Louise died due to complications from a miscarriage on 19 December 1751, at Christiansborg Palace
Christiansborg Palace
Christiansborg Palace, , on the islet of Slotsholmen in central Copenhagen, is the seat of the Folketing , the Danish Prime Minister's Office and the Danish Supreme Court...
, Copenhagen
Copenhagen
Copenhagen is the capital and largest city of Denmark, with an urban population of 1,199,224 and a metropolitan population of 1,930,260 . With the completion of the transnational Øresund Bridge in 2000, Copenhagen has become the centre of the increasingly integrating Øresund Region...
, predeceasing her husband by fourteen years. She was buried at Roskilde Cathedral
Roskilde Cathedral
Roskilde Cathedral , in the city of Roskilde on the island of Zealand in eastern Denmark, is a cathedral of the Lutheran Church of Denmark. The first Gothic cathedral to be built of brick, it encouraged the spread of the Brick Gothic style throughout Northern Europe...
.

On 30 August 1727, as a child of the sovereign, Louise was granted use of the arms of the realm, differenced by a label argent of three points, each bearing torteaux gules.