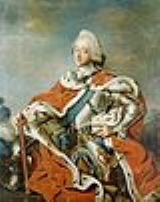 Christian VI and Sophia Magdalen were deeply devoted to Pietism
Pietism
Pietism was a movement within Lutheranism, lasting from the late 17th century to the mid-18th century and later. It proved to be very influential throughout Protestantism and Anabaptism, inspiring not only Anglican priest John Wesley to begin the Methodist movement, but also Alexander Mack to...
, and Frederick was given a strictly religious upbringing. Although not unfamiliar with religious sentiments, Frederick grew into a hedonist who enjoyed the pleasures of life such as wine and women.

He was first married at Altona
Altona, Hamburg
Altona is the westernmost urban borough of the German city state of Hamburg, on the right bank of the Elbe river. From 1640 to 1864 Altona was under the administration of the Danish monarchy. Altona was an independent city until 1937...
, Holstein
Holstein
Holstein is the region between the rivers Elbe and Eider. It is part of Schleswig-Holstein, the northernmost state of Germany....
, on 11 December 1743 to Princess Louise of Great Britain
Louise of Great Britain
Louise of Great Britain was the youngest surviving daughter of George II of Great Britain and Caroline of Ansbach, and became queen consort of Denmark and Norway.-Early life:...
, daughter of King George II
George II of Great Britain
George II was King of Great Britain and Ireland, Duke of Brunswick-Lüneburg and Archtreasurer and Prince-elector of the Holy Roman Empire from 11 June 1727 until his death.George was the last British monarch born outside Great Britain. He was born and brought up in Northern Germany...
and Caroline of Ansbach
Caroline of Ansbach
Caroline of Brandenburg-Ansbach was the queen consort of King George II of Great Britain.Her father, John Frederick, Margrave of Brandenburg-Ansbach, was the ruler of a small German state...
. They were the parents of six children, but one was stillborn.
Louise died on 19 December 1751 at Christiansborg Palace
Christiansborg Palace
Christiansborg Palace, , on the islet of Slotsholmen in central Copenhagen, is the seat of the Folketing , the Danish Prime Minister's Office and the Danish Supreme Court...
, predeceasing her husband by fourteen years, and was buried at Roskilde Cathedral
Roskilde Cathedral
Roskilde Cathedral , in the city of Roskilde on the island of Zealand in eastern Denmark, is a cathedral of the Lutheran Church of Denmark. The first Gothic cathedral to be built of brick, it encouraged the spread of the Brick Gothic style throughout Northern Europe...
. At the time of her death, she was pregnant with her seventh child, who also died.

The personal influence of Frederick was limited. He was afflicted by alcoholism and most of his rule was dominated by very able ministers like A. G. Moltke, J. H. E. Bernstorff and H. C. Schimmelmann. They avoided involving Denmark in the Europe
Europe
Europe is, by convention, one of the world's seven continents. Comprising the westernmost peninsula of Eurasia, Europe is generally 'divided' from Asia to its east by the watershed divides of the Ural and Caucasus Mountains, the Ural River, the Caspian and Black Seas, and the waterways connecting...
an wars of his time. The country remained neutral even for the duration of the Seven Years' War
Seven Years' War
The Seven Years' War was a global military war between 1756 and 1763, involving most of the great powers of the time and affecting Europe, North America, Central America, the West African coast, India, and the Philippines...
(1756–63), despite its proximity to combatants Russia
Russia
Russia or , officially known as both Russia and the Russian Federation , is a country in northern Eurasia. It is a federal semi-presidential republic, comprising 83 federal subjects...
and Sweden
Sweden
Sweden , officially the Kingdom of Sweden , is a Nordic country on the Scandinavian Peninsula in Northern Europe. Sweden borders with Norway and Finland and is connected to Denmark by a bridge-tunnel across the Öresund....
.

The king died at the age of 42, and after twenty years of reign. His last words were reportedly: "It is a great consolation to me in my last hour that I have never wilfully offended anyone and that there is not a drop of blood on my hands." 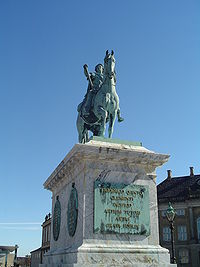 On 1 August 1771, five years after the king's death, an equestrian statue of Frederick V dressed in the garb of a Roman emperor
Roman Emperor
The Roman emperor was the ruler of the Roman State during the imperial period . The Romans had no single term for the office although at any given time, a given title was associated with the emperor...
by the French sculptor Jacques François Joseph Saly
Jacques Saly
Jacques François Joseph Saly, also known as Jacques Saly , French-born sculptor who worked in France, Denmark, and Italy, was born in Valenciennes to Francois Marie Saly and wife Marie Michelle....
was unveiled at Amalienborg Square
Amalienborg Palace
Amalienborg Palace is the winter home of the Danish royal family, and is located in Copenhagen, Denmark. It consists of four identical classicizing palace façades with rococo interiors around an octagonal courtyard ; in the centre of the square is a monumental equestrian statue of Amalienborg's...
in Copenhagen
Copenhagen
Copenhagen is the capital and largest city of Denmark, with an urban population of 1,199,224 and a metropolitan population of 1,930,260 . With the completion of the transnational Øresund Bridge in 2000, Copenhagen has become the centre of the increasingly integrating Øresund Region...
.

The town of Frederiksværk
Frederiksværk
Frederiksværk is a town with a population of 12,257 in Halsnæs Municipality on Zealand in Region Hovedstaden in Denmark.-History:A French cannon founder, Peyrembert, received permission to build a cannon factory here...
on the island of Zealand, the town of Frederiksted on the island of St. Croix, U.S. Virgin Islands, as well as the district Frederiksstaden
Frederiksstaden
Frederiksstaden is a district in Copenhagen, Denmark. Constructed during the reign of Frederick V in the second half of the 18th century and it is considered to be one of the most important rococo complexes in Europe....
in Copenhagen
Copenhagen
Copenhagen is the capital and largest city of Denmark, with an urban population of 1,199,224 and a metropolitan population of 1,930,260 . With the completion of the transnational Øresund Bridge in 2000, Copenhagen has become the centre of the increasingly integrating Øresund Region...
are named after Frederick V.

Within one hundred years of his time, Denmark faced the crisis of his male issue (the main branch of the Royal House) becoming extinct. This created a succession crisis beginning from his grandson's reign that affected both Denmark and Schleswig-Holstein. Finally, his great-grandson through the female line, Christian IX of Denmark
Christian IX of Denmark
Christian IX was King of Denmark from 16 November 1863 to 29 January 1906.Growing up as a prince of Schleswig-Holstein-Sonderburg-Glücksburg, a junior branch of the House of Oldenburg which had ruled Denmark since 1448, Christian was originally not in the immediate line of succession to the Danish...
, who was married to his great-granddaughter Louise of Hesse-Kassel
Louise of Hesse-Kassel
Louise of Hesse was a German Princess and the queen consort to King Christian IX of Denmark.-Early Life and Ancestry:...
(or Hesse-Cassel), became the designated heir.