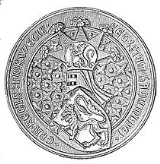 Haakon V Magnusson was king of Norway
Norway
Norway , officially the Kingdom of Norway, is a Nordic unitary constitutional monarchy whose territory comprises the western portion of the Scandinavian Peninsula, Jan Mayen, and the Arctic archipelago of Svalbard and Bouvet Island. Norway has a total area of and a population of about 4.9 million...
from 1299 until 1319.

Haakon was the younger surviving son of Magnus the Lawmender, King of Norway
Magnus VI of Norway
Magnus VI Lagabøte or Magnus Håkonsson , was king of Norway from 1263 until 1280.-Early life:...
, and his wife Ingeborg of Denmark
Ingeborg of Denmark, Queen of Norway
Ingeborg Eriksdotter was a Danish princess. She was married to King Magnus VI of Norway and was Queen consort of Norway. Later as Queen dowager, she played an important part in politics during the minority of her son King Eirik II of Norway.-Biography:Ingeborg was born the daughter of Eric IV of...
. Haakon was descended from king Saint Olav and is considered to have been the last Norwegian king in the Fairhair dynasty
Fairhair dynasty
The Fairhair dynasty was a family of kings founded by Harald I of Norway which ruled Norway with few interruptions from 800 to 1387 , or through only three generations of kings , in the 10th century CE....
. Through his mother, he was a descendant of Eric IV
Eric IV of Denmark
Eric IV, also known as Eric Ploughpenny , was king of Denmark from 1241 until his death in 1250. He was the son of King Valdemar II of Denmark by his wife, Infanta Berengária of Portugal, and brother to King Abel and King Christopher I.-Early life:...
, king of Denmark. Haakon succeeded when his older brother king Eirik died without sons.

Haakon was married to Eufemia of Rügen
Eufemia of Rügen
Euphemia Güntersdotter of Rügen was the Queen consort of Norway as the spouse of Haakon V of Norway...
, the daughter of Günther, Count of Arnstein
Arnstein
Arnstein is a town in the Main-Spessart district in the Regierungsbezirk of Lower Franconia in Bavaria, Germany.- Location :...
. In 1312, his only legitimate daughter, Ingeborg Håkonsdotter
Ingeborg of Norway
Ingeborg of Norway , was a Norwegian and by marriage Swedish princess and royal duchess with a position in the regency governments in Norway and Sweden...
married duke Eric Magnusson of Sweden, a younger brother of King Birger of Sweden. Their son, Magnus Eriksson
Magnus IV of Sweden
Magnus Eriksson as Magnus IV was king of Sweden , including Finland, as Magnus VII King of Norway , including Iceland and Greenland, and also ruled Scania . He has also vindictively been called Magnus Smek...
would succeed Haakon V as king of Norway.

In 1302, Agnes Håkonsdotter (1290–1319), his illegitimate daughter, married Havtore Jonsson  (1275–1320) who was a Norwegian nobleman (lendmann
Lendmann
Lendmann , was a title in medieval Norway. Lendmann was the highest rank attainable in the hird of the Norwegian king, and a lendmann stood beneath only earls and kings...
) and sheriff of Akershus (Sudreimsslekten) in Romerike
Romerike
Romerike is a traditional district located north-east of Oslo, in what is today south-eastern Norway. It consists of the Akershus municipalities Fet, Lørenskog, Nittedal, Rælingen, Skedsmo, Sørum and Aurskog-Høland in the southern end , and Ullensaker, Gjerdrum, Nannestad, Nes, Eidsvoll and Hurdal...
. Their two sons, collectively referred to as Havtoresønnnene, became central in Norwegian politics. Jon Havtoresson (ca. 1312-ca. 1390) and Sigurd Havtoresson (ca. 1315-ca. 1392) played leading roles in Norwegian politics during the reign of their cousin, King Magnus Eriksson.

Haakon made Oslo
Oslo
Oslo is a municipality, as well as the capital and most populous city in Norway. As a municipality , it was established on 1 January 1838. Founded around 1048 by King Harald III of Norway, the city was largely destroyed by fire in 1624. The city was moved under the reign of Denmark–Norway's King...
the national capital of Norway in 1314. Haakon is also associated with the construction of the Akershus Fortress
Akershus Fortress
Akershus Fortress or Akershus Castle is a medieval castle that was built to protect Oslo, the capital of Norway. It has also been used as a prison.- Construction :...
(Akershus Festning) and Bohus Fortress
Bohus Fortress
Bohus Fortress lies along the old Norwegian - Swedish border in Kungälv, Bohuslän, Sweden, north east from Hisingen where the Göta river splits into two branches...
(Båhus festning). During his reign he revived his brother's war policy against Denmark
Denmark
Denmark is a Scandinavian country in Northern Europe. The countries of Denmark and Greenland, as well as the Faroe Islands, constitute the Kingdom of Denmark . It is the southernmost of the Nordic countries, southwest of Sweden and south of Norway, and bordered to the south by Germany. Denmark...
, but in 1309 he finally concluded a peace that in general was the end of a period of Dano-Norwegian wars. In domestic matters he energetically and successfully tried to limit the power of the magnates and to strengthen the king's power.

In 1319, Haakon was succeeded by his daughter's son, prince Magnus
Magnus IV of Sweden
Magnus Eriksson as Magnus IV was king of Sweden , including Finland, as Magnus VII King of Norway , including Iceland and Greenland, and also ruled Scania . He has also vindictively been called Magnus Smek...
who was an infant. Haakon's daughter Ingeborg was recognized as formal regent of her son. Havtore Jonsson was put in the guardianship government until he himself died the following year.

Haakon was buried in St. Mary's church
St Mary's Church, Oslo
St Mary's Church was a medieval church in Oslo, Norway.St Mary's Church, which functioned as royal chapel, had been built in stages with final additions made in the 1300s. The church was put on fire by Swedish forces in connection with an attack in 1523...
(Mariakirken) in Oslo
Oslo
Oslo is a municipality, as well as the capital and most populous city in Norway. As a municipality , it was established on 1 January 1838. Founded around 1048 by King Harald III of Norway, the city was largely destroyed by fire in 1624. The city was moved under the reign of Denmark–Norway's King...
. Remains of two people, deemed to be Haakon and Eufemia, were discovered during excavations of the ruins of that church and reinterred in the royal mausoleum at Akershus Castle.