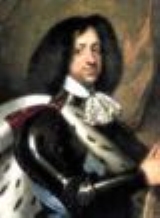 Encyclopedia
Christian V was king of Denmark
Denmark
Denmark is a Scandinavian country in Northern Europe. The countries of Denmark and Greenland, as well as the Faroe Islands, constitute the Kingdom of Denmark . It is the southernmost of the Nordic countries, southwest of Sweden and south of Norway, and bordered to the south by Germany. Denmark...
and Norway
Norway
Norway , officially the Kingdom of Norway, is a Nordic unitary constitutional monarchy whose territory comprises the western portion of the Scandinavian Peninsula, Jan Mayen, and the Arctic archipelago of Svalbard and Bouvet Island. Norway has a total area of and a population of about 4.9 million...
from 1670 to 1699, the son of Frederick III of Denmark
Frederick III of Denmark
Frederick III was king of Denmark and Norway from 1648 until his death. He instituted absolute monarchy in Denmark and Norway in 1660, confirmed by law in 1665 as the first in western historiography. He was born the second-eldest son of Christian IV of Denmark and Anne Catherine of Brandenburg...
and Sophie Amalie of Brunswick-Lüneburg. He married Charlotte Amalie of Hesse-Kassel (or Hesse-Cassel) on 14 May 1667 at Nykøbing and ascended the throne on 9 February 1670.

It is generally argued that Christian V's personal courage and affability made him popular among the common people, but his image was marred by his unsuccessful attempt to regain Scania
Skåneland
Skåneland or Skånelandene are terms used in historical contexts in Scandinavia to describe the area on the southern and south-western part of the Scandinavian peninsula, which under the Treaty of Roskilde was transferred from Denmark to Sweden. It corresponds to the provinces of Blekinge,...
for Denmark in the Scanian War
Scanian War
The Scanian War was a part of the Northern Wars involving the union of Denmark-Norway, Brandenburg and Sweden. It was fought mainly on Scanian soil, in the former Danish provinces along the border with Sweden and in Northern Germany...
. The war exhausted Denmark's economic resources without securing any gains.

Part of Christian's appeal to the common people may be explained by the fact that he allowed Danish commoners into state service, but his attempts to curtail the influence of the nobility also meant continuing his father's drive toward absolutism
Absolute monarchy
Absolute monarchy is a monarchical form of government in which the monarch exercises ultimate governing authority as head of state and head of government, his or her power not being limited by a constitution or by the law. An absolute monarch thus wields unrestricted political power over the...
. To accommodate non-aristocrats into state service, he created the new noble ranks of count
Count
A count or countess is an aristocratic nobleman in European countries. The word count came into English from the French comte, itself from Latin comes—in its accusative comitem—meaning "companion", and later "companion of the emperor, delegate of the emperor". The adjective form of the word is...
and baron
Baron
Baron is a title of nobility. The word baron comes from Old French baron, itself from Old High German and Latin baro meaning " man, warrior"; it merged with cognate Old English beorn meaning "nobleman"...
. One of the commoners elevated in this way by the king was Peder Schumacher, named Count Griffenfeldt by Christian V in 1670 and high councillor of Denmark in 1674.

Griffenfeldt, a skilled statesman, better understood the precarious situation Denmark placed itself by attacking Sweden at a time when the country was allied with France, the major European power of the era. As Griffenfeldt predicted, Sweden's stronger ally France was the party that dictated the peace with Denmark's ally Holland, and in spite of Danish victory at sea in the battles against Sweden
Sweden
Sweden , officially the Kingdom of Sweden , is a Nordic country on the Scandinavian Peninsula in Northern Europe. Sweden borders with Norway and Finland and is connected to Denmark by a bridge-tunnel across the Öresund....
in 1675–1679 during the Scanian War
Scanian War
The Scanian War was a part of the Northern Wars involving the union of Denmark-Norway, Brandenburg and Sweden. It was fought mainly on Scanian soil, in the former Danish provinces along the border with Sweden and in Northern Germany...
, Danish hopes for border changes on the Scandinavian Peninsula
Scandinavian Peninsula
The Scandinavian Peninsula is a peninsula in Northern Europe, which today covers Norway, Sweden, and most of northern Finland. Prior to the 17th and 18th centuries, large parts of the southern peninsula—including the core region of Scania from which the peninsula takes its name—were part of...
between the two countries were dashed. The results of the war efforts proved politically and financially unremunerative for Denmark. The damage to the Danish economy was extensive. At this point, Christian V no longer had his most experienced foreign relations counsel around to repair the political damage - in 1676 he had been persuaded to sacrifice Griffenfeldt as a traitor, and to the clamour of his adversaries, Griffenfeldt was imprisoned for the remainder of his life.

Christian V introduced Danske Lov (the Danish Code
Danish Code
Danske Lov is the title of a Danish statute book from 1683, that previously formed the basis for the Danish legislation. Even though it is mainly a compilation of older, regional laws, it took 7 different commissions several decades under two different monarchs to put the Code together...
) in 1683, the first law code for all of Denmark. It was succeeded by the similar Norske Lov (Norwegian Code) of 1687. He also introduced the land register of 1688, which attempted to work out the land value of the united monarchy in order to create a more just taxation. During his reign, science
Science
Science is a systematic enterprise that builds and organizes knowledge in the form of testable explanations and predictions about the universe...
witnessed a golden age due to the work of the astronomer Ole Rømer in spite of the king’s personal lack of scientific knowledge and interest.

Like Charles XI of Sweden, who had never been outside Sweden, Christian spoke German and Danish only and was therefore often considered poorly educated due to his inability to communicate with visiting foreign diplomats. Christian V was also often considered dependent on his councillors by contemporary sources. The Danish monarch did nothing to dispel this notion. In his memoirs, he listed "hunting, love-making, war and maritime affairs" as his main interests in life. 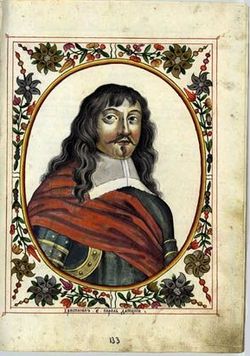 Christian V had eight children by his wife and five by his mistress. He publicly introduced his sixteen-year-old mistress, Sophie Amalie Moth
Sophie Amalie Moth
Sophie Amalie Moth, Countess of Samsø was Christian V of Denmark’s acknowledged official lover. She was the first officially acknowledged royal mistress in Denmark.-Biography:...
(1654–1719), into court in 1672, a move which insulted his wife. His mistress was the daughter of his former tutor (Paul Moth
Paul Moth
Paul Boothby Simarin Moth was a fictional broadcaster on two CBC radio comedy shows: The Great Eastern and Sunny Days and Nights. He served as host on those two shows, which often featured comedic sketches of his personal life, presented as cinéma vérité in audio. Moth was portrayed by Newfoundland...
), and he made her countess of Samsø
Samsø
Samsø is a Danish island in the Kattegat off the Jutland Peninsula. Samsø is located in Samsø municipality. The community has 4,300 inhabitants called Samsingers and is 114 km² in area. Due to its central location, the island was used during the Viking Age as a meeting place...
on 31 December 1677.