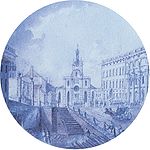 The Stockholm Palace is the official residence
Official residence
An official residence is the residence at which heads of state, heads of government, gubernatorial or other senior figures officially reside...
and major royal palace of the Swedish monarch. (The private residence of the royal family is Drottningholm Palace
Drottningholm Palace
The Drottningholm Palace is the private residence of the Swedish royal family. It is located in Drottningholm. It is built on the island Lovön , and is one of Sweden's Royal Palaces. It was originally built in the late 16th century. It served as a residence of the Swedish royal court for most of...
). Stockholm Palace is located on Stadsholmen
Stadsholmen
Stadsholmen is the historical name of an island in the centre of Stockholm, Sweden. Together with the small islands Riddarholmen and Helgeandsholmen it forms the Old town of Stockholm....
("city island"), in Gamla Stan
Gamla stan
Gamla stan , until 1980 officially Staden mellan broarna , is the old town of Stockholm, Sweden. Gamla stan consists primarily of the island Stadsholmen. The surrounding islets Riddarholmen, Helgeandsholmen, and Strömsborg are officially part of, but not colloquially included in, Gamla stan...
(the old town) in the capital, Stockholm
Stockholm
Stockholm is the capital and the largest city of Sweden and constitutes the most populated urban area in Scandinavia. Stockholm is the most populous city in Sweden, with a population of 851,155 in the municipality , 1.37 million in the urban area , and around 2.1 million in the metropolitan area...
. It neighbours the Riksdag
Parliament of Sweden
The Riksdag is the national legislative assembly of Sweden. The riksdag is a unicameral assembly with 349 members , who are elected on a proportional basis to serve fixed terms of four years...
, Sweden's parliament
Parliament
A parliament is a legislature, especially in those countries whose system of government is based on the Westminster system modeled after that of the United Kingdom. The name is derived from the French , the action of parler : a parlement is a discussion. The term came to mean a meeting at which...
.

The offices of the monarch (King Carl XVI Gustaf
Carl XVI Gustaf of Sweden
Carl XVI Gustaf is the reigning King of Sweden since 15 September 1973, succeeding his grandfather King Gustaf VI Adolf because his father had predeceased him...
) and the other members of the Swedish Royal Family
Swedish Royal Family
The Swedish Royal Family since 1818 consists of a number of persons in the Swedish Royal House of Bernadotte, closely related to the King of Sweden. They are entitled to royal titles and style , and some perform official engagements and ceremonial duties of state...
as well as the offices of the Royal Court of Sweden
Royal Court of Sweden
The Royal Court of Sweden is the official name for the organisation that supports the Monarch of Sweden, and the Royal House...
are located there. The palace is used for representative purposes by the King whilst performing his duties as the head of state
Head of State
A head of state is the individual that serves as the chief public representative of a monarchy, republic, federation, commonwealth or other kind of state. His or her role generally includes legitimizing the state and exercising the political powers, functions, and duties granted to the head of...
. 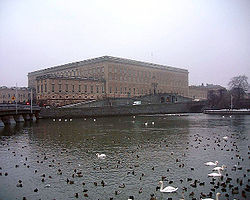 The first building on this site was a fortress with a core tower
Tower
A tower is a tall structure, usually taller than it is wide, often by a significant margin. Towers are distinguished from masts by their lack of guy-wires....
built in the 13th century by Birger Jarl
Birger jarl
, or Birger Magnusson, was a Swedish statesman, Jarl of Sweden and a member of the House of Bjelbo, who played a pivotal role in the consolidation of Sweden. Birger also led the Second Swedish Crusade, which established Swedish rule in Finland. Additionally, he is traditionally attributed to have...
to defend Lake Mälaren. The fortress grew to a palace, named Tre Kronor
Tre kronor (castle)
Tre Kronor or Three Crowns was a castle located in Stockholm, Sweden, on the site where Stockholm Palace is today. It is believed to have been a citadel that Birger Jarl built into a royal castle in the middle of the 13th century...
("Three Crowns") after the core towers' spire.

In the late 16th century, much work was done to transform the old fortress into a Renaissance-style
Renaissance architecture
Renaissance architecture is the architecture of the period between the early 15th and early 17th centuries in different regions of Europe, demonstrating a conscious revival and development of certain elements of ancient Greek and Roman thought and material culture. Stylistically, Renaissance...
palace
Palace
A palace is a grand residence, especially a royal residence or the home of a head of state or some other high-ranking dignitary, such as a bishop or archbishop. The word itself is derived from the Latin name Palātium, for Palatine Hill, one of the seven hills in Rome. In many parts of Europe, the...
under King John III
John III of Sweden
-Family:John married his first wife, Catherine Jagellonica of Poland , house of Jagiello, in Vilnius on 4 October 1562. In Sweden, she is known as Katarina Jagellonica. She was the sister of king Sigismund II Augustus of Poland...
. In 1690, it was decided to rebuild the palace in Baroque
Baroque
The Baroque is a period and the style that used exaggerated motion and clear, easily interpreted detail to produce drama, tension, exuberance, and grandeur in sculpture, painting, literature, dance, and music...
style after a design by Nicodemus Tessin the Younger
Nicodemus Tessin the Younger
Count Nicodemus Tessin the Younger was a Swedish Baroque architect, city planner, and administrator.The son of Nicodemus Tessin the Elder and the father of Carl Gustaf Tessin, Tessin the Younger was the middle-most generation of the brief Tessin dynasty, which have had a lasting influence on...
. In 1692, work began on the northern row. It was complete in 1697, but much of the palace was destroyed in a fire on May 7, 1697.

Tessin rebuilt the damaged palace, and work continued for another 63 years. Half-round wings around the outer western courtyard
Courtyard
A court or courtyard is an enclosed area, often a space enclosed by a building that is open to the sky. These areas in inns and public buildings were often the primary meeting places for some purposes, leading to the other meanings of court....
were finished in 1734, the palace church was finished in the 1740s, and the exterior was finished in 1754. The royal family moved to the palace with the southwest, southeast, and northeast wings finished. The northwest wing was finished in 1760. In the north, the Lejonbacken ("Lion's Slope") was rebuilt from 1824 to 1830. Its name comes from the Medici lions
Medici lions
The Medici lions are two lion sculptures placed around 1600 at the Villa Medici, Rome, Italy, and since 1789 displayed at the Loggia dei Lanzi, Florence. The sculptures depict standing male lions with a sphere under one claw, looking to the side...
-inspired sculpture
Sculpture
Sculpture is three-dimensional artwork created by shaping or combining hard materials—typically stone such as marble—or metal, glass, or wood. Softer materials can also be used, such as clay, textiles, plastics, polymers and softer metals...
s that stand there.

The palace is built of brick
Brick
A brick is a block of ceramic material used in masonry construction, usually laid using various kinds of mortar. It has been regarded as one of the longest lasting and strongest building materials used throughout history.-History:...
, with midsections of the west, south, and east façade
Facade
A facade or façade is generally one exterior side of a building, usually, but not always, the front. The word comes from the French language, literally meaning "frontage" or "face"....
s covered by sandstone
Sandstone
Sandstone is a sedimentary rock composed mainly of sand-sized minerals or rock grains.Most sandstone is composed of quartz and/or feldspar because these are the most common minerals in the Earth's crust. Like sand, sandstone may be any colour, but the most common colours are tan, brown, yellow,...
. The roof slopes slightly inwards. The roof
Roof
A roof is the covering on the uppermost part of a building. A roof protects the building and its contents from the effects of weather. Structures that require roofs range from a letter box to a cathedral or stadium, dwellings being the most numerous....
is covered with copper
Copper
Copper is a chemical element with the symbol Cu and atomic number 29. It is a ductile metal with very high thermal and electrical conductivity. Pure copper is soft and malleable; an exposed surface has a reddish-orange tarnish...
and is surrounded by a stone
Rock (geology)
In geology, rock or stone is a naturally occurring solid aggregate of minerals and/or mineraloids.The Earth's outer solid layer, the lithosphere, is made of rock. In general rocks are of three types, namely, igneous, sedimentary, and metamorphic...
balustrade which is stretched around the entire main building.

From the main buildings' corners, four wings stretch out east and west. All wings are 48 m long and 16 m wide except the southwest wing which is only 11 m. The irregularity is hidden by two free-standing half-round wings that surround the outer courtyard. The Logården ("Lynx Yard") is a small garden between the southeast and northeast wing. 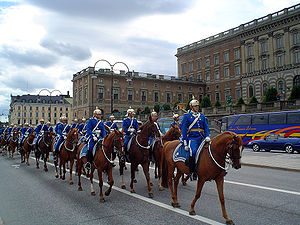 One stair down, with entrance from the south, lies Livrustkammaren
Livrustkammaren
The is a museum in the Royal Palace in Stockholm, Sweden. It contains many artefacts of Swedish military history and Swedish royalty. Seen from an international perspective, the Royal Armoury's collections are of world-class...
, Sweden's oldest museum, which contains old weapons, uniforms and also the crown jewels.

In the northern row lie the King's and Queen's suites (which contains bedchambers, wardrobes and anterooms). In the northern row also lies the State apartment which contains the ball room Vita Havet (the White Sea). In the same row Karl XI:s galleri (Charles XI
Charles XI of Sweden
Charles XI also Carl, was King of Sweden from 1660 until his death, in a period in Swedish history known as the Swedish empire ....
's gallery) is located, from 1950 used as the main banqueting room in the Palace with room for about 200 seated guests. Between five and ten dinners (official dinners, state dinners and a dinner in honour of the Nobel prize winners) are held in the galley each year. Also in the northern row of the Palace lies the old Square Room in which the King, and sometimes the Crown Princess, meet with the Government for Council in State. On the ground floor lies the Exhibition apartments which is used for special exhibitions and public lectures. The rooms used to be the private apartment of king Gustaf VI Adolf
Gustaf VI Adolf of Sweden
Gustaf VI Adolf - Oscar Fredrik Wilhelm Olaf Gustaf Adolf - was King of Sweden from October 29, 1950 until his death. His official title was King of Sweden, of the Goths and of the Wends. He was the eldest son of King Gustaf V and his wife Victoria of Baden...
. On the street level, under Lejonbacken, lies Museum Tre Kronor. The museum is located in the rooms that used to be kitchens in the Tre Kronor Castle and are thus the oldest rooms in the Palace.

In the northeast wing lies Gustav III
Gustav III of Sweden
Gustav III was King of Sweden from 1771 until his death. He was the eldest son of King Adolph Frederick and Queen Louise Ulrica of Sweden, she a sister of Frederick the Great of Prussia....
's antikmuseum (museum of antiques). It contains ancient sculptures found in Italy
Italy
Italy , officially the Italian Republic languages]] under the European Charter for Regional or Minority Languages. In each of these, Italy's official name is as follows:;;;;;;;;), is a unitary parliamentary republic in South-Central Europe. To the north it borders France, Switzerland, Austria and...
.