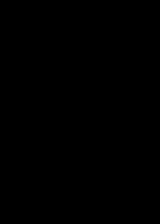 Encyclopedia
A cross is a geometrical figure consisting of two lines or bars perpendicular to each other, dividing one or two of the lines in half. The lines usually run vertically and horizontally; if they run obliquely, the design is technically termed a saltire
Saltire
A saltire, or Saint Andrew's Cross, is a heraldic symbol in the form of a diagonal cross or letter ex . Saint Andrew is said to have been martyred on such a cross....
, although the arms of a saltire need not meet at right angles.

The cross is one of the most ancient human symbols, and is used by many religions, such as Christianity
Christian cross
The Christian cross, seen as a representation of the instrument of the crucifixion of Jesus Christ, is the best-known religious symbol of Christianity...
. It is frequently a representation of the division of the world into four elements
Classical element
Many philosophies and worldviews have a set of classical elements believed to reflect the simplest essential parts and principles of which anything consists or upon which the constitution and fundamental powers of anything are based. Most frequently, classical elements refer to ancient beliefs...
(Chevalier, 1997) or cardinal points, or alternately as the union of the concepts of divinity
Divinity
Divinity and divine are broadly applied but loosely defined terms, used variously within different faiths and belief systems — and even by different individuals within a given faith — to refer to some transcendent or transcendental power or deity, or its attributes or manifestations in...
, the vertical line, and the world
World
World is a common name for the whole of human civilization, specifically human experience, history, or the human condition in general, worldwide, i.e. anywhere on Earth....
, the horizontal line (Koch, 1955).

The word cross comes ultimately from Latin
Latin
Latin is an Italic language originally spoken in Latium and Ancient Rome. It, along with most European languages, is a descendant of the ancient Proto-Indo-European language. Although it is considered a dead language, a number of scholars and members of the Christian clergy speak it fluently, and...
crux, a Roman torture device used for crucifixion
Crucifixion
Crucifixion is an ancient method of painful execution in which the condemned person is tied or nailed to a large wooden cross and left to hang until dead...
, via Old Irish cros. The word was introduced to English in the 10th century as the term for the instrument of the torturous execution of Jesus
Crucifixion of Jesus
The crucifixion of Jesus and his ensuing death is an event that occurred during the 1st century AD. Jesus, who Christians believe is the Son of God as well as the Messiah, was arrested, tried, and sentenced by Pontius Pilate to be scourged, and finally executed on a cross...
as described in the New Testament
New Testament
The New Testament is the second major division of the Christian biblical canon, the first such division being the much longer Old Testament....
, gradually replacing the earlier word rood
Rood
A rood is a cross or crucifix, especially a large one in a church; a large sculpture or sometimes painting of the crucifixion of Jesus.Rood is an archaic word for pole, from Old English rōd "pole", specifically "cross", from Proto-Germanic *rodo, cognate to Old Saxon rōda, Old High German ruoda...
.

It is not known when the first cross image was made; after circles, crosses are one of the first symbols drawn by children of all cultures. There are many cross-shaped incisions
Petroglyph
Petroglyphs are pictogram and logogram images created by removing part of a rock surface by incising, picking, carving, and abrading. Outside North America, scholars often use terms such as "carving", "engraving", or other descriptions of the technique to refer to such images...
in European cult caves, dating back to the earliest stages of human cultural development in the stone age
Stone Age
The Stone Age is a broad prehistoric period, lasting about 2.5 million years , during which humans and their predecessor species in the genus Homo, as well as the earlier partly contemporary genera Australopithecus and Paranthropus, widely used exclusively stone as their hard material in the...
. Like other symbols from this period, their use continued in the Celt
Celt
The Celts were a diverse group of tribal societies in Iron Age and Roman-era Europe who spoke Celtic languages.The earliest archaeological culture commonly accepted as Celtic, or rather Proto-Celtic, was the central European Hallstatt culture , named for the rich grave finds in Hallstatt, Austria....
ic and Germanic
Germanic peoples
The Germanic peoples are an Indo-European ethno-linguistic group of Northern European origin, identified by their use of the Indo-European Germanic languages which diversified out of Proto-Germanic during the Pre-Roman Iron Age.Originating about 1800 BCE from the Corded Ware Culture on the North...
cultures in Europe. For example, celtic coins minted many centuries before the Christian era may have an entire side showing this type of cross, sometimes with the cardinal points marked by concave depressions in the same style as in stone age carvings. Other coins may be showing the cross held by a rider on a horse and springing a fern leaf, sometimes identified as a Tree of Life
Tree of life
The concept of a tree of life, a many-branched tree illustrating the idea that all life on earth is related, has been used in science , religion, philosophy, mythology, and other areas...
symbol. 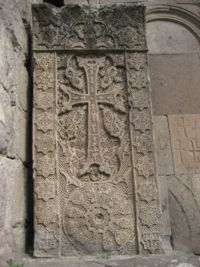 Written crosses are used for many different purposes, particularly in mathematics.

As emblems and symbols

These crosses are ones used primarily or exclusively in heraldry
Heraldry
Heraldry is the profession, study, or art of creating, granting, and blazoning arms and ruling on questions of rank or protocol, as exercised by an officer of arms. Heraldry comes from Anglo-Norman herald, from the Germanic compound harja-waldaz, "army commander"...
and do not necessarily have any special meanings commonly associated with them. Not all the crosses of heraldry and the crosses with commonly known contexts are listed below.


There are numerous other variations on the cross in heraldry. See heraldry
Heraldry
Heraldry is the profession, study, or art of creating, granting, and blazoning arms and ruling on questions of rank or protocol, as exercised by an officer of arms. Heraldry comes from Anglo-Norman herald, from the Germanic compound harja-waldaz, "army commander"...
for background information.

James Parker's A Glossary of Terms Used in Heraldry (1894) is online, and contains much information about variants of crosses used in heraldry.

Several flags have crosses, including all the nations of Scandinavia
Scandinavia
Scandinavia is a cultural, historical and ethno-linguistic region in northern Europe that includes the three kingdoms of Denmark, Norway and Sweden, characterized by their common ethno-cultural heritage and language. Modern Norway and Sweden proper are situated on the Scandinavian Peninsula,...
, whose crosses are known as Scandinavian crosses
Nordic Cross Flag
The Nordic Cross Flag, Nordic Cross, or Scandinavian Cross is a pattern of flags usually associated with the flags of the Scandinavian countries of which it originated. All of the Nordic countries except Greenland have adopted such flags...
, and many nations in the Southern Hemisphere
Southern Hemisphere
The Southern Hemisphere is the part of Earth that lies south of the equator. The word hemisphere literally means 'half ball' or "half sphere"...
, which incorporate the Southern Cross
Crux
Crux is the smallest of the 88 modern constellations, but is one of the most distinctive. Its name is Latin for cross, and it is dominated by a cross-shaped asterism that is commonly known as the Southern Cross.-Visibility:...
. The Flag of Switzerland
Flag of Switzerland
The flag of Switzerland consists of a red flag with a white cross in the centre. It is one of only two square sovereign-state flags, the other being the flag of the Vatican City...
since the 17th century has displayed an equilateral cross in a square (the only square flag of a sovereign state apart from the Flag of the Vatican City
Flag of the Vatican City
The flag of Vatican City was adopted on June 7, 1929, the year Pope Pius XI signed the Lateran Treaty with Italy, creating a new independent state governed by the Holy See...
); the Red Cross emblem was based on the Swiss flag.

Crux
Crux
Crux is the smallest of the 88 modern constellations, but is one of the most distinctive. Its name is Latin for cross, and it is dominated by a cross-shaped asterism that is commonly known as the Southern Cross.-Visibility:...
, or the Southern Cross, is a cross-shaped constellation
Constellation
In modern astronomy, a constellation is an internationally defined area of the celestial sphere. These areas are grouped around asterisms, patterns formed by prominent stars within apparent proximity to one another on Earth's night sky....
in the Southern Hemisphere
Southern Hemisphere
The Southern Hemisphere is the part of Earth that lies south of the equator. The word hemisphere literally means 'half ball' or "half sphere"...
. It appears on the national flags of Australia
Australia
Australia , officially the Commonwealth of Australia, is a country in the Southern Hemisphere comprising the mainland of the Australian continent, the island of Tasmania, and numerous smaller islands in the Indian and Pacific Oceans. It is the world's sixth-largest country by total area...
, Brazil
Brazil
Brazil , officially the Federative Republic of Brazil , is the largest country in South America. It is the world's fifth largest country, both by geographical area and by population with over 192 million people...
, New Zealand
New Zealand
New Zealand is an island country in the south-western Pacific Ocean comprising two main landmasses and numerous smaller islands. The country is situated some east of Australia across the Tasman Sea, and roughly south of the Pacific island nations of New Caledonia, Fiji, and Tonga...
, Niue
Niue
Niue , is an island country in the South Pacific Ocean. It is commonly known as the "Rock of Polynesia", and inhabitants of the island call it "the Rock" for short. Niue is northeast of New Zealand in a triangle between Tonga to the southwest, the Samoas to the northwest, and the Cook Islands to...
, Papua New Guinea
Papua New Guinea
Papua New Guinea , officially the Independent State of Papua New Guinea, is a country in Oceania, occupying the eastern half of the island of New Guinea and numerous offshore islands...
and Samoa
Samoa
Samoa , officially the Independent State of Samoa, formerly known as Western Samoa is a country encompassing the western part of the Samoan Islands in the South Pacific Ocean. It became independent from New Zealand in 1962. The two main islands of Samoa are Upolu and one of the biggest islands in...
.

The tallest cross, at 152.4 metres high, is part of Francisco Franco
Francisco Franco
Francisco Franco y Bahamonde was a Spanish general, dictator and head of state of Spain from October 1936 , and de facto regent of the nominally restored Kingdom of Spain from 1947 until his death in November, 1975...
's monumental "Valley of the Fallen", the Monumento Nacional de Santa Cruz del Valle de los Caidos in Spain
Spain
Spain , officially the Kingdom of Spain languages]] under the European Charter for Regional or Minority Languages. In each of these, Spain's official name is as follows:;;;;;;), is a country and member state of the European Union located in southwestern Europe on the Iberian Peninsula...
.

The tallest freestanding cross is located in St. Augustine, FL and stands 260 feet.

The tombs at Naqsh-e Rustam
Naqsh-e Rustam
Naqsh-e Rustam also referred to as Necropolis is an archaeological site located about 12 km northwest of Persepolis, in Fars province, Iran. Naqsh-e Rustam lies a few hundred meters from Naqsh-e Rajab....
, Iran
Iran
Iran , officially the Islamic Republic of Iran , is a country in Southern and Western Asia. The name "Iran" has been in use natively since the Sassanian era and came into use internationally in 1935, before which the country was known to the Western world as Persia...
, made in the 5th century BC, are carved into the cliffside in the shape of a cross. They are known as the "Persian crosses".