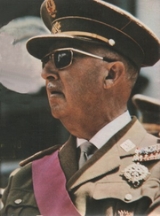 Overview
Francisco Franco y Bahamonde (fɾanˈθisko ˈfɾaŋko; 4 December 1892 20 November 1975) was a Spanish general, dictator and head of state of Spain from October 1936 (as a unified nation from 1939 onwards), and de facto
De facto
De facto is a Latin expression that means "concerning fact." In law, it often means "in practice but not necessarily ordained by law" or "in practice or actuality, but not officially established." It is commonly used in contrast to de jure when referring to matters of law, governance, or...
regent
Regent
A regent, from the Latin regens "one who reigns", is a person selected to act as head of state because the ruler is a minor, not present, or debilitated. Currently there are only two ruling Regencies in the world, sovereign Liechtenstein and the Malaysian constitutive state of Terengganu...
of the nominally restored Kingdom of Spain from 1947 until his death in November, 1975. He came to power as a prominent member of the far-right Falange movement, although this was for propaganda reasons as he belonged to no political party before becoming Head of State.

What country did Francisco Franco represent

How was Franco's rule marked by political oppression?

What are positive/negative effects of Francisco Franco dictatorship

1936    Francisco Franco is named head of the Nationalist government of Spain.

1939    Generalísimo Francisco Franco of the Spanish State announces the end of the Spanish Civil War, when the last of the Republican forces surrender.

1975    Juan Carlos is declared King of Spain following the death of Francisco Franco.

One thing that I am sure of, and which I can answer truthfully, is that whatever the contingencies that may arise here, wherever I am there will be no Communism.

Let us be under no illusion. The Jewish spirit, which was responsible for the alliance of large-scale capital with Karl Marx|Marxism and was the driving force behind so many anti-Spanish revolutionary agreements, will not be got rid of in a day.

The whole secret of the campaigns unleashed against Spain can be explained in two words: Masonry and Communism... we have to extirpate these two evils from our land.

Writing under the alias Jakin Boor in the journal Arriba in an article, "Masonry and Communism" (14 December 1946), as quoted in Franco: A Biography by Juan Pablo Fusi Aizpurúạ, p. 71

The defence of internal peace and order constitutes the sacred mission of a nation's armed forces and that is what we have carried out.