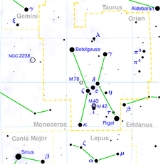 Overview
In modern astronomy
Astronomy
Astronomy is a natural science that deals with the study of celestial objects and phenomena that originate outside the atmosphere of Earth...
, a constellation is an internationally defined area of the celestial sphere
Celestial sphere
In astronomy and navigation, the celestial sphere is an imaginary sphere of arbitrarily large radius, concentric with the Earth and rotating upon the same axis. All objects in the sky can be thought of as projected upon the celestial sphere. Projected upward from Earth's equator and poles are the...
. These areas are grouped around asterisms
Asterism (astronomy)
In astronomy, an asterism is a pattern of stars recognized on Earth's night sky. It may form part of an official constellation, or be composed of stars from more than one. Like constellations, asterisms are in most cases composed of stars which, while they are visible in the same general direction,...
, patterns formed by prominent stars within apparent proximity to one another on Earth's night sky
Night sky
The term night sky refers to the sky as seen at night. The term is usually associated with astronomy, with reference to views of celestial bodies such as stars, the Moon, and planets that become visible on a clear night after the Sun has set. Natural light sources in a night sky include moonlight,...
.

There are 88 standard constellations recognized by the International Astronomical Union
International Astronomical Union
The International Astronomical Union IAU is a collection of professional astronomers, at the Ph.D. level and beyond, active in professional research and education in astronomy...
(IAU) since 1922. The majority of these goes back to the 48 constellations defined by Ptolemy
Ptolemy
Claudius Ptolemy , was a Roman citizen of Egypt who wrote in Greek. He was a mathematician, astronomer, geographer, astrologer, and poet of a single epigram in the Greek Anthology. He lived in Egypt under Roman rule, and is believed to have been born in the town of Ptolemais Hermiou in the...
in his Almagest
Almagest
The Almagest is a 2nd-century mathematical and astronomical treatise on the apparent motions of the stars and planetary paths. Written in Greek by Claudius Ptolemy, a Roman era scholar of Egypt,...
(2nd century).

Do the stars that make up the constellation of Ursla Major come under the heading of Multiple Stars and if so are they considered to be Physical or Op...

Where is the constellation of orion and its important details located?

How were constellations formed the way they are?

Why is a zodiac contellation is known as special constellation?
More

Where does the consellation Orion get its name, and during which months it has best seen?!
More
x