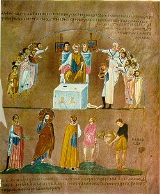 Unlike the Old Testament or Hebrew Bible
Hebrew Bible
The Hebrew Bible is a term used by biblical scholars outside of Judaism to refer to the Tanakh , a canonical collection of Jewish texts, and the common textual antecedent of the several canonical editions of the Christian Old Testament...
, of which Christians hold different views, the contents of the New Testament deal explicitly with 1st century Christianity
Christianity in the 1st century
The earliest followers of Jesus composed an apocalyptic, Jewish sect, which historians refer to as Jewish Christianity. The Apostles and others following the Great Commission's decree to spread the teachings of Jesus to "all nations," had great success spreading the religion to gentiles. Peter,...
, although both the Old and New Testament are regarded, together, as Sacred Scripture. The New Testament has therefore (in whole or in part) frequently accompanied the spread of Christianity around the world
Early centers of Christianity
Early Christianity spread from Western Asia, throughout the Roman Empire, and beyond into East Africa and South Asia, reaching as far as India. At first, this development was closely connected to centers of Hebrew faith, in the Holy Land and the Jewish diaspora...
, and both reflects and serves as a source for Christian theology
Christian theology
- Divisions of Christian theology :There are many methods of categorizing different approaches to Christian theology. For a historical analysis, see the main article on the History of Christian theology.- Sub-disciplines :...
.

Does the ten commandments still exsist

Does the new testestament start in matthew or acts

What are the four divisions of the New Testamen?

How did they tell time at night, ie, "the third hour of the night."

The New Testamen Epistles are arranged by?
More
x