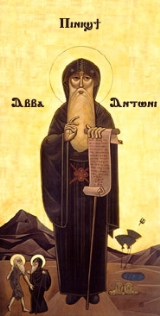 Overview
Anthony the Great or Antony the Great (c. 251–356), (Coptic
Coptic language
Coptic or Coptic Egyptian is the current stage of the Egyptian language, a northern Afro-Asiatic language spoken in Egypt until at least the 17th century. Egyptian began to be written using the Greek alphabet in the 1st century...
Ⲁⲃⲃⲁ Ⲁⲛⲧⲱⲛⲓ), also known as Saint Anthony, Anthony the Abbot, Anthony of Egypt, Anthony of the Desert, Anthony the Anchorite, Abba Antonius (Ἀββᾶς Ἀντώνιος), and Father of All Monks, was a Christian
Christianity
Christianity is a monotheistic religion based on the life and teachings of Jesus as presented in canonical gospels and other New Testament writings...
saint
Saint
A saint is a holy person. In various religions, saints are people who are believed to have exceptional holiness.In Christian usage, "saint" refers to any believer who is "in Christ", and in whom Christ dwells, whether in heaven or in earth...
from Egypt
Egypt
Egypt , officially the Arab Republic of Egypt, Arabic: , is a country mainly in North Africa, with the Sinai Peninsula forming a land bridge in Southwest Asia. Egypt is thus a transcontinental country, and a major power in Africa, the Mediterranean Basin, the Middle East and the Muslim world...
, a prominent leader among the Desert Fathers
Desert Fathers
The Desert Fathers were hermits, ascetics, monks, and nuns who lived mainly in the Scetes desert of Egypt beginning around the third century AD. The most well known was Anthony the Great, who moved to the desert in 270–271 and became known as both the father and founder of desert monasticism...
. He is celebrated in many churches on his feast days: 30 January in the Eastern Orthodox Church
Eastern Orthodox Church
The Orthodox Church, officially called the Orthodox Catholic Church and commonly referred to as the Eastern Orthodox Church, is the second largest Christian denomination in the world, with an estimated 300 million adherents mainly in the countries of Belarus, Bulgaria, Cyprus, Georgia, Greece,...
and the Coptic Orthodox Church; 17 January in the Roman Catholic Church
Roman Catholic Church
The Catholic Church, also known as the Roman Catholic Church, is the world's largest Christian church, with over a billion members. Led by the Pope, it defines its mission as spreading the gospel of Jesus Christ, administering the sacraments and exercising charity...
and the Coptic Catholic Church
Coptic Catholic Church
The Coptic Catholic Church is an Alexandrian Rite particular Church in full communion with the Pope of Rome. Historically, Coptic Catholics represent a schism from the Coptic Orthodox Church, leaving that church in order to come into full communion with the Bishop of Rome.The current Coptic...
.

A time is coming when men will go mad, and when they see someone who is not mad, they will attack him, saying, "You are mad; you are not like us."

Our life and our death are with our neighbour. If we gain our brother we have gained God; but if we scandalise our brother, we have sinned against Christ.

I no longer fear God, I love him.

I saw all the snares that the enemy spreads over the whole world and I said, groaning, "What can get through such snares?" Then I heard a voice saying to me, "Humility."