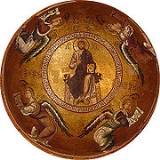 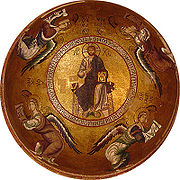 A Christogram is a monogram
Monogram
A monogram is a motif made by overlapping or combining two or more letters or other graphemes to form one symbol. Monograms are often made by combining the initials of an individual or a company, used as recognizable symbols or logos. A series of uncombined initials is properly referred to as a...
or combination of letters that forms an abbreviation for the name of Jesus
Jesus
Jesus of Nazareth , commonly referred to as Jesus Christ or simply as Jesus or Christ, is the central figure of Christianity...
Christ
Christ
Christ is the English term for the Greek meaning "the anointed one". It is a translation of the Hebrew , usually transliterated into English as Messiah or Mashiach...
, traditionally used as a Christian symbol
Christian symbolism
Christian symbolism invests objects or actions with an inner meaning expressing Christian ideas. Christianity has borrowed from the common stock of significant symbols known to most periods and to all regions of the world. Religious symbolism is effective when it appeals to both the intellect and...
. Different types of Christograms are associated with the various traditions of Christianity
Christianity
Christianity is a monotheistic religion based on the life and teachings of Jesus as presented in canonical gospels and other New Testament writings...
, e.g. the IHS monogram referring to the Holy Name of Jesus
Holy Name of Jesus
In Christianity, the Holy Name of Jesus refers to the theological and devotional use of the name of Jesus. The reverence and affection with which Christians have regarded the Holy Name of Jesus goes back to the earliest days of Christianity....
or ΙϹΧϹ referring to Christ.

In Eastern Christianity
Eastern Christianity
Eastern Christianity comprises the Christian traditions and churches that developed in the Balkans, Eastern Europe, Asia Minor, the Middle East, Northeastern Africa, India and parts of the Far East over several centuries of religious antiquity. The term is generally used in Western Christianity to...
, the most widely used Christogram is a four-letter abbreviation, ΙϹΧϹ — a traditional abbreviation of the Greek
Greek language
Greek is an independent branch of the Indo-European family of languages. Native to the southern Balkans, it has the longest documented history of any Indo-European language, spanning 34 centuries of written records. Its writing system has been the Greek alphabet for the majority of its history;...
words for "Jesus Christ" (i.e., the first and last letters of each of the words — written "ΙΗϹΟΥϹ ΧΡΙϹΤΟϹ" with the lunate sigma "Ϲ" common in medieval Greek). On icons, this Christogram may be split: "ΙϹ" on the left of the image and "ΧϹ" on the right, most often with a bar above the letters (see titlo
Titlo
Titlo is an extended diacritic symbol initially used in old Cyrillic manuscripts, e.g., in Old Church Slavonic and Old East Slavic languages. The word is a borrowing from the Greek "", "title"...
s), indicating that it is a sacred name. It is sometimes rendered as "ΙϹΧϹ ΝΙΚΑ", meaning "Jesus Christ Conquers."
"ΙϹΧϹ" may also be seen inscribed on the Ichthys
Ichthys
Ichthys, from Koine Greek: , is the Greek word for "fish"....
. In the traditional icon
Icon
An icon is a religious work of art, most commonly a painting, from Eastern Christianity and in certain Eastern Catholic churches...
of Christ Pantokrator, Christ's right hand is shown in a pose that represents the letters ΙϹ, Χ, and Ϲ.

In the Latin
Latin
Latin is an Italic language originally spoken in Latium and Ancient Rome. It, along with most European languages, is a descendant of the ancient Proto-Indo-European language. Although it is considered a dead language, a number of scholars and members of the Christian clergy speak it fluently, and...
-speaking Christianity of medieval Western Europe (and so among Catholics and many Protestants today), the most common Christogram became "IHS" or "IHC", denoting the first three letters of the Greek
Greek language
Greek is an independent branch of the Indo-European family of languages. Native to the southern Balkans, it has the longest documented history of any Indo-European language, spanning 34 centuries of written records. Its writing system has been the Greek alphabet for the majority of its history;...
name of Jesus, iota
Iota
Iota is the ninth letter of the Greek alphabet. In the system of Greek numerals it has a value of 10. It was derived from the Phoenician letter Yodh . Letters that arose from this letter include the Roman I and J and the Cyrillic І , Yi , Je , and iotified letters .Iota represents...
-eta
Eta (letter)
Eta ) is the seventh letter of the Greek alphabet. Originally denoting a consonant /h/, its sound value in the classical Attic dialect of Ancient Greek was a long vowel , raised to in medieval Greek, a process known as itacism.In the system of Greek numerals it has a value of 8...
-sigma, or .

"IHS" is sometimes interpreted as meaning Iesus Hominum Salvator ("Jesus, Savior of men" in Latin) or connected with In Hoc Signo
In hoc signo vinces
In hoc signo vinces is a Latin rendering of the Greek phrase "" en touto nika, and means "in this sign you will conquer"....
. Such interpretations are known as backronym
Backronym
A backronym or bacronym is a phrase constructed purposely, such that an acronym can be formed to a specific desired word. Backronyms may be invented with serious or humorous intent, or may be a type of false or folk etymology....
s. Used in Latin since the seventh century, the first use of IHS in an English document dates from the fourteenth century, in The vision of William concerning Piers Plowman. Saint Bernardino of Siena
Bernardino of Siena
Saint Bernardino of Siena, O.F.M., was an Italian priest, Franciscan missionary, and is a Catholic saint.-Early life:...
popularized the use of the three letters on the background of a blazing sun to displace both popular pagan symbols and seals of political factions like the Guelphs and Ghibellines
Guelphs and Ghibellines
The Guelphs and Ghibellines were factions supporting the Pope and the Holy Roman Emperor, respectively, in central and northern Italy. During the 12th and 13th centuries, the split between these two parties was a particularly important aspect of the internal policy of the Italian city-states...
in public spaces (see Feast of the Holy Name of Jesus
Feast of the Holy Name of Jesus
The Feast of the Holy Name of Jesus is celebrated by a number of Christian denominations, on varying dates.The feast has been celebrated in the Roman Catholic calendar of saints, at least at local levels, since the end of the fifteenth century...
). English-language interpretations of "IHS" have included "I Have Suffered" or "In His Service", or jocularly and facetiously "Jesus H. Christ
Jesus H. Christ
Jesus H. Christ is an example of slang serving as a profanity.The expression dates to at least the late 19th century, although according to Mark Twain it was already old in 1850....
".

One of the oldest Christograms is the Chi-Rho or Labarum
Labarum
The labarum was a vexillum that displayed the "Chi-Rho" symbol ☧, formed from the first two Greek letters of the word "Christ" — Chi and Rho . It was used by the Roman emperor Constantine I...
. It consists of the superimposed Greek letters chi
Chi (letter)
Chi is the 22nd letter of the Greek alphabet, pronounced as in English.-Greek:-Ancient Greek:Its value in Ancient Greek was an aspirated velar stop .-Koine Greek:...
and rho
Rho (letter)
Rho is the 17th letter of the Greek alphabet. In the system of Greek numerals, it has a value of 100. It is derived from Semitic resh "head"...
, which are the first two letters of Christ in Greek. Technically, the word labarum is Latin for a type of vexillum
Vexillum
The vexillum was a flag-like object used in the Classical Era of the Roman Empire. The word is itself a diminutive for the Latin word, velum, sail, which confirms the historical evidence that vexilla were literally "little sails" i.e. flag-like standards...
, a military standard with a flag hanging from a horizontal crossbar. A Chi-Rho Christogram was added to the flag by the Emperor Constantine I
Constantine I
Constantine the Great , also known as Constantine I or Saint Constantine, was Roman Emperor from 306 to 337. Well known for being the first Roman emperor to convert to Christianity, Constantine and co-Emperor Licinius issued the Edict of Milan in 313, which proclaimed religious tolerance of all...
in the late Roman period. Therefore Christogram and labarum were not originally synonyms.

The most commonly encountered Christogram in English-speaking countries in modern times is the X (or more accurately, Greek letter chi) in the abbreviation Xmas
Xmas
"Xmas" is a common abbreviation of the word "Christmas". It is sometimes pronounced , but it, and variants such as "Xtemass", originated as handwriting abbreviations for the typical pronunciation...
(for "Christmas"), which represents the first letter of the word Christ.