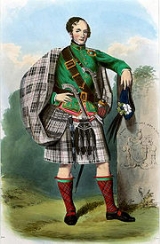 Encyclopedia
Clan Macpherson is a Highland Scottish clan
Scottish clan
Scottish clans , give a sense of identity and shared descent to people in Scotland and to their relations throughout the world, with a formal structure of Clan Chiefs recognised by the court of the Lord Lyon, King of Arms which acts as an authority concerning matters of heraldry and Coat of Arms...
from Badenoch
Badenoch
Badenoch is a traditional district which today forms part of Badenoch and Strathspey, an area of Highland Council, in Scotland, bounded on the north by the Monadhliath Mountains, on the east by the Cairngorms and Braemar, on the south by Atholl and the Grampians, and on the west by Lochaber...
, on the River Spey
River Spey
The River Spey is a river in the northeast of Scotland, the second longest and the fastest-flowing river in Scotland...
. It is a leading member of the Chattan Confederation
Chattan Confederation
Clan Chattan or the Chattan Confederation is a confederation of 16 Scottish clans who joined for mutual defence or blood bonds. Its leader was the chief of Clan Mackintosh.-Origins:The origin of the name Chattan is disputed...
. 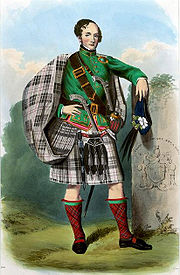 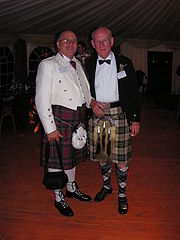 The name Macpherson -- or MacPherson or McPherson, according to different spellings -- comes from the Gaelic Mac a' Phearsain and means 'Son of the Parson'. The Parson in question was Muriach, a 12th century parson, or lay preacher, of Kingussie
Kingussie
Kingussie is a small town in the Highland region of Scotland. It is one settlement in the Highland Council ward of Badenoch and Strathspey, and is the capital of the district of Badenoch. It lies beside the A9 road, although the old route of the A9 serves as the town's main street...
in Badenoch. Historically, the term 'parson' (in the Gaelic pearsain or pears-eaglais literally 'person of the church') had a different meaning. Before the Reformation in Highland Scotland, the religious leader of a parish was the priest and the parson was the steward of church property, responsible for the collection of tithes. The history of Clan Macpherson has been called "The Posterity of the Three Brethren" as the three grandsons of Muriach are the antecedents of the three main clan families, Cluny, Pitmain and Invereshie.

Battle of Invernahoven 1370 or 1387. The Clan Cameron
Clan Cameron
Clan Cameron is a West Highland Scottish clan, with one main branch Lochiel, and numerous cadet branches. The Clan Cameron lands are in Lochaber and within their lands is the mountain Ben Nevis which is the highest mountain in the British Isles. The chief of the clan is customarily referred to as...
numbering approximately 400 men were returning home with the treasures they had acquired after a raid at Badenoch. They were overtaken at Invernahavon by a body of Chattan Confederation
Chattan Confederation
Clan Chattan or the Chattan Confederation is a confederation of 16 Scottish clans who joined for mutual defence or blood bonds. Its leader was the chief of Clan Mackintosh.-Origins:The origin of the name Chattan is disputed...
led by Lachlan, Laird of Clan Mackintosh
Clan MacKintosh
Clan Mackintosh is a Scottish clan from Inverness with strong Jacobite ties. The Mackintoshes were also chiefs of the Chattan Confederation.-Origins:...
. The Chattan Confederation forces consisted of the Mackintoshes, Davidsons and Macphersons. As a result of a disagreement as to whether the Davidsons or Macphersons would occupy the right wing which was the post of honour, the Macphersons withdrew in disgust from the army. The combined numbers of the Clan Chattan confederation had outnumbered the Camerons but with the loss of the Macphersons the Camerons now had a greater number. The battle resulted in a defeat for the Clan Chattan confederation (Mackintosh and Davidson). It is said that an ally of Cameron known as Charles MacGilony led the clan into battle and is believed to have changed the outcome of the day with his uncanny ability as an archer. At this point, possibly the next morning the Macphersons changed their minds and decided to rejoin the Chatton confederation attacking the Camerons with such vigor that they changed the victory into defeat, and put the Camerons "to flight" towards Drumouchter, skirting the end of Loch Ericht, and then westwards in the direction of the River Treig. The Mackintoshes later claimed that the Macphersons were coaxed into the battle by a man from clan Mackintosh who turned up at Macphersons camp pretending to be from Clan Cameron and calling the Macphersons cowards. The Macphersons then attacked the Camerons' camp making a dreadful slaughter of them, even killing the Camerons' uncanny archer Charles MacGilony at a place now called Charles's Valley, or in Gailic Coire Thearlaich.

At the beginning of the 1745 Jacobite Rising
Jacobite rising
The Jacobite Risings were a series of uprisings, rebellions, and wars in Great Britain and Ireland occurring between 1688 and 1746. The uprisings were aimed at returning James VII of Scotland and II of England, and later his descendants of the House of Stuart, to the throne after he was deposed by...
, the Clan Macpherson chief commanded a company of his clan in the services of the British government. However a party of Camerons
Clan Cameron
Clan Cameron is a West Highland Scottish clan, with one main branch Lochiel, and numerous cadet branches. The Clan Cameron lands are in Lochaber and within their lands is the mountain Ben Nevis which is the highest mountain in the British Isles. The chief of the clan is customarily referred to as...
, commanded by Dr. Cameron, was sent to the house of Macpherson of Cluny, the chief of the Macphersons. They were there to apprehend him, and succeeded. The Macphersons then joined the Jacobites.

However Charles was urged to wait for Cluny, who was engaged in operation in Atholl, before the Battle of Culloden
Battle of Culloden
The Battle of Culloden was the final confrontation of the 1745 Jacobite Rising. Taking place on 16 April 1746, the battle pitted the Jacobite forces of Charles Edward Stuart against an army commanded by William Augustus, Duke of Cumberland, loyal to the British government...
. He did not and the men of Macpherson took no part in the famous defeat at Culloden. The regiment was disbanded and Ewan went into hiding. A reward of 1000 pounds was placed on his head, but he was never captured in the nine years he spent in hiding. In 1755 he fled to France. During his time in hiding, his wife, Janet, gave birth to their son. The child was born in a corn kiln, earning him the nickname 'Duncan of the Kiln'.

During his time hiding in and around the clan seat at Laggan, Macpherson had many hiding places made for him. One of these was Cluny's Cage, which featured in "Kidnapped" by Robert Louis Stevenson, a heather hut on the slopes of Ben Alder
Ben Alder
Ben Alder is the highest mountain in the remote area of the Scottish Highlands between Loch Ericht and Glen Spean. The vast summit plateau is home of one of Britain's highest bodies of standing water, Lochan a' Garbh Coire. It is the 25th highest Munro, and due to its remote location, one of the...
. In another story Cluny was staying at Dalchully House in a bolt hole in the East wing when he was caught outside by Colonel Munro, the very man charged with searching for him. Since the two men had never met, Cluny calmly held the Colonel's horse whilst the soldier went inside the house. It is claimed that he was given a penny for his trouble. Another of the famous hiding places is Cluny's Cave high on the crags of Creag Dhubh between Newtonmore and Laggan. This cave is no longer accessible without expert assistance. Every year in August, clan Macpherson holds a family gathering, during which a ceremonial run to the top of Craig Dubh and back takes place. 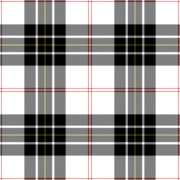 Clan association: Clan Macpherson has a very active clan association, with 2500 members in many countries of the world. It publishes an annual newsletter, Creag Dhubh, operates the Clan Macpherson House and Museum at Newtonmore in the heart of clan territory, and organises the annual clan gathering at Kingussie and Newtonmore. Members participate in activities worldwide, including Highland Games in Scotland, Australia, Canada and the United States. The chairman of the Clan Macpherson Association is Shelagh Macpherson-Noble of Haddington, Scotland.

There are 17 tartans ascribed to Clan Macpherson. The most common are the red, hunting and dress tartans.

The 21st and current Chief of the Clan is Sir William Macpherson of Cluny Macpherson, retired High court judge
High Court judge
A High Court judge is a judge of the High Court of Justice, and represents the third highest level of judge in the courts of England and Wales. High Court judges are referred to as puisne judges...
, and author of the Macpherson report into the racially motivated killing of Stephen Lawrence
Stephen Lawrence
Stephen Lawrence was a black British teenager from Eltham, southeast London, who was stabbed to death while waiting for a bus on the evening of 22 April 1993....
. Model Elle Macpherson
Elle Macpherson
Elle Macpherson is an Australian model, actress, and businesswoman nicknamed "The Body". She is perhaps best known for her record five cover appearances for the Sports Illustrated Swimsuit Issue beginning in the 1980s...
is a member of the clan despite being a Macpherson only by adoption, since she was born a Gow, one of the associated families. Jack White
Jack White (musician)
Jack White , often credited as Jack White III, is an American musician, songwriter, record producer and occasional actor...
of the White Stripes
The White Stripes
The White Stripes was an American rock band, formed in 1997 in Detroit, Michigan. The group consisted of the songwriter Jack White and drummer Meg White . Jack and Meg White were previously married to each other, but are now divorced...
and the Raconteurs
The Raconteurs
The Raconteurs is an American rock band that was formed in Detroit, Michigan, featuring four members known for other musical projects: Jack White , Brendan Benson , Jack Lawrence , and Patrick Keeler .-Formation:The...
has sported the MacPherson kilt and said in an interview that he is from the clan MacPherson. Jack White's original last name is Gillis.