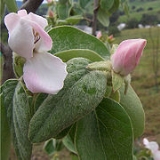 Encyclopedia
The quince or Cydonia oblonga, is the sole member of the genus Cydonia and native to warm-temperate southwest Asia
Asia
Asia is the world's largest and most populous continent, located primarily in the eastern and northern hemispheres. It covers 8.7% of the Earth's total surface area and with approximately 3.879 billion people, it hosts 60% of the world's current human population...
in the Caucasus
Caucasus
The Caucasus, also Caucas or Caucasia , is a geopolitical region at the border of Europe and Asia, and situated between the Black and the Caspian sea...
region. It is a small, deciduous
Deciduous
Deciduous means "falling off at maturity" or "tending to fall off", and is typically used in reference to trees or shrubs that lose their leaves seasonally, and to the shedding of other plant structures such as petals after flowering or fruit when ripe...
tree
Tree
A tree is a perennial woody plant. It is most often defined as a woody plant that has many secondary branches supported clear of the ground on a single main stem or trunk with clear apical dominance. A minimum height specification at maturity is cited by some authors, varying from 3 m to...
, growing 5–8 m tall and 4–6 m wide, related to apple
Apple
The apple is the pomaceous fruit of the apple tree, species Malus domestica in the rose family . It is one of the most widely cultivated tree fruits, and the most widely known of the many members of genus Malus that are used by humans. Apple grow on small, deciduous trees that blossom in the spring...
s and pear
Pear
The pear is any of several tree species of genus Pyrus and also the name of the pomaceous fruit of these trees. Several species of pear are valued by humans for their edible fruit, but the fruit of other species is small, hard, and astringent....
s, and like them has a pome
Pome
In botany, a pome is a type of fruit produced by flowering plants in the subfamily Maloideae of the family Rosaceae.A pome is an accessory fruit composed of one or more carpels surrounded by accessory tissue...
fruit
Fruit
In broad terms, a fruit is a structure of a plant that contains its seeds.The term has different meanings dependent on context. In non-technical usage, such as food preparation, fruit normally means the fleshy seed-associated structures of certain plants that are sweet and edible in the raw state,...
, which is bright golden yellow when mature, pear-shaped, 7–12 cm long and 6–9 cm broad.

The immature fruit is green with dense grey-white pubescence, most of which rubs off before maturity in late autumn when the fruit changes colour to yellow with hard, strongly perfumed flesh. The leaves
Leaf
A leaf is an organ of a vascular plant, as defined in botanical terms, and in particular in plant morphology. Foliage is a mass noun that refers to leaves as a feature of plants....
are alternately arranged, simple, 6–11 cm long, with an entire margin and densely pubescent with fine white hairs. The flower
Flower
A flower, sometimes known as a bloom or blossom, is the reproductive structure found in flowering plants . The biological function of a flower is to effect reproduction, usually by providing a mechanism for the union of sperm with eggs...
s, produced in spring after the leaves, are white or pink, 5 cm across, with five petals.

Four other species previously included in the genus Cydonia are now treated in separate genera
Genera
Genera is a commercial operating system and development environment for Lisp machines developed by Symbolics. It is essentially a fork of an earlier operating system originating on the MIT AI Lab's Lisp machines which Symbolics had used in common with LMI and Texas Instruments...
. These are the Chinese quince Pseudocydonia sinensis
Pseudocydonia
Pseudocydonia sinensis , the only species in the genus Pseudocydonia, is a deciduous or semi-evergreen tree in the family Rosaceae, native to eastern Asia in China. It is closely related to the east Asian genus Chaenomeles, and is sometimes placed in Chaenomeles as C...
, a native of China, and the three flowering quinces of eastern Asia in the genus Chaenomeles
Chaenomeles
Chaenomeles is a genus of three species of deciduous spiny shrubs, usually 1–3 m tall, in the family Rosaceae. They are native to eastern Asia in Japan, China and Korea...
. Another unrelated fruit, the bael
Bael
Bael Bael (Aegle marmelos) Bael (Aegle marmelos) (Bengal quince, stone apple, Sanskrit : विल्व, Malayalam: കൂവളം, Bengali: বেল, Hindi: बेल (Sirphal), Marathi: बेल or कवीठ (Kaveeth), , Sindhi: ڪاٺ گدرو , Sinhalese: beli, Tamil: வில்வம் is a species of tree native to India...
, is sometimes called the "Bengal quince".

Turkey ranks first in world quince production by producing a quarter of the total world production. 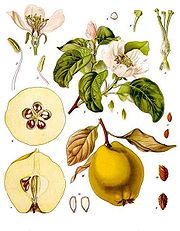 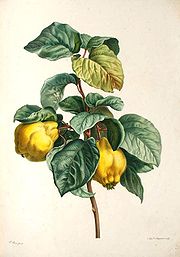 Cultivation of quince may have preceded apple culture, and many references translated to "apple", such as the fruit in Song of Solomon
Song of Solomon
The Song of Songs of Solomon, commonly referred to as Song of Songs or Song of Solomon, is a book of the Hebrew Bible—one of the megillot —found in the last section of the Tanakh, known as the Ketuvim...
, may have been a quince. Among the ancient Greeks, the quince was a ritual offering at weddings, for it had come from the Levant
Levant
The Levant or ) is the geographic region and culture zone of the "eastern Mediterranean littoral between Anatolia and Egypt" . The Levant includes most of modern Lebanon, Syria, Jordan, Israel, the Palestinian territories, and sometimes parts of Turkey and Iraq, and corresponds roughly to the...
with Aphrodite
Aphrodite
Aphrodite is the Greek goddess of love, beauty, pleasure, and procreation.Her Roman equivalent is the goddess .Historically, her cult in Greece was imported from, or influenced by, the cult of Astarte in Phoenicia....
and remained sacred to her. Plutarch
Plutarch
Plutarch then named, on his becoming a Roman citizen, Lucius Mestrius Plutarchus , c. 46 – 120 AD, was a Greek historian, biographer, essayist, and Middle Platonist known primarily for his Parallel Lives and Moralia...
reported that a Greek bride would nibble a quince to perfume her kiss before entering the bridal chamber, "in order that the first greeting may not be disagreeable nor unpleasant" (Roman Questions 3.65). It was a quince that Paris
Paris (mythology)
Paris , the son of Priam, king of Troy, appears in a number of Greek legends. Probably the best-known was his elopement with Helen, queen of Sparta, this being one of the immediate causes of the Trojan War...
awarded Aphrodite. It was for a golden quince that Atalanta
Atalanta
Atalanta is a character in Greek mythology.-Legend:Atalanta was the daughter of Iasus , a Boeotian or an Arcadian princess . She is often described as a goddess. Apollodorus is the only one who gives an account of Atalanta’s birth and upbringing...
paused in her race. The Romans also used quinces; the Roman cookbook of Apicius
Apicius
Apicius is the title of a collection of Roman cookery recipes, usually thought to have been compiled in the late 4th or early 5th century AD and written in a language that is in many ways closer to Vulgar than to Classical Latin....
gives recipes for stewing quince with honey
Honey
Honey is a sweet food made by bees using nectar from flowers. The variety produced by honey bees is the one most commonly referred to and is the type of honey collected by beekeepers and consumed by humans...
, and even combining them, unexpectedly, with leeks. Pliny the Elder
Pliny the Elder
Gaius Plinius Secundus , better known as Pliny the Elder, was a Roman author, naturalist, and natural philosopher, as well as naval and army commander of the early Roman Empire, and personal friend of the emperor Vespasian...
mentioned the one variety, Mulvian quince, that could be eaten raw. Columella
Columella
Lucius Junius Moderatus Columella is the most important writer on agriculture of the Roman empire. Little is known of his life. He was probably born in Gades , possibly of Roman parents. After a career in the army , he took up farming...
mentioned three, one of which, the "golden apple" that may have been the paradisal fruit in the Garden of the Hesperides
Hesperides
In Greek mythology, the Hesperides are nymphs who tend a blissful garden in a far western corner of the world, located near the Atlas mountains in North Africa at the edge of the encircling Oceanus, the world-ocean....
, has donated its name in Italian to the tomato, pomodoro.

Quince is resistant to frost and requires a cold period below 7 °C to flower properly. The tree is self-fertile; however, its yield can benefit from cross-fertilization. The fruit can be left on the tree to ripen further, which softens the fruit to the point where it can be eaten raw in warmer climates, but should be picked before the first frosts.

In Europe
Europe
Europe is, by convention, one of the world's seven continents. Comprising the westernmost peninsula of Eurasia, Europe is generally 'divided' from Asia to its east by the watershed divides of the Ural and Caucasus Mountains, the Ural River, the Caspian and Black Seas, and the waterways connecting...
, quinces are commonly grown in central and southern areas where the summers are sufficiently hot for the fruit to fully ripen. They are not grown in large amounts; typically one or two quince trees are grown in a mixed orchard with several apples and other fruit trees: so were they grown in the 18th-century New England colonies, where there was always a quince at the lower corner of the vegetable garden, Ann Leighton notes in records of Portsmouth, New Hampshire
Portsmouth, New Hampshire
Portsmouth is a city in Rockingham County, New Hampshire in the United States. It is the largest city but only the fourth-largest community in the county, with a population of 21,233 at the 2010 census...
and Newburyport, Massachusetts
Newburyport, Massachusetts
Newburyport is a small coastal city in Essex County, Massachusetts, United States, 35 miles northeast of Boston. The population was 21,189 at the 2000 census. A historic seaport with a vibrant tourism industry, Newburyport includes part of Plum Island...
. Charlemagne
Charlemagne
Charlemagne was King of the Franks from 768 and Emperor of the Romans from 800 to his death in 814. He expanded the Frankish kingdom into an empire that incorporated much of Western and Central Europe. During his reign, he conquered Italy and was crowned by Pope Leo III on 25 December 800...
directed that quinces be planted in well-stocked orchards. Quinces in England are first recorded in about 1275, when Edward I had some planted at the Tower of London;
x