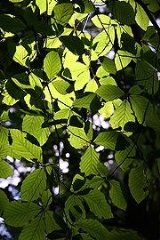 Overview
A leaf is an organ
Organ (anatomy)
In biology, an organ is a collection of tissues joined in structural unit to serve a common function. Usually there is a main tissue and sporadic tissues . The main tissue is the one that is unique for the specific organ. For example, main tissue in the heart is the myocardium, while sporadic are...
of a vascular plant
Vascular plant
Vascular plants are those plants that have lignified tissues for conducting water, minerals, and photosynthetic products through the plant. Vascular plants include the clubmosses, Equisetum, ferns, gymnosperms and angiosperms...
, as defined in botanical terms
Botany
Botany, plant science, or plant biology is a branch of biology that involves the scientific study of plant life. Traditionally, botany also included the study of fungi, algae and viruses...
, and in particular in plant morphology
Plant morphology
Plant morphology or phytomorphology is the study of the physical form and external structure of plants. This is usually considered distinct from plant anatomy, which is the study of the internal structure of plants, especially at the microscopic level...
. Foliage is a mass noun
Mass noun
In linguistics, a mass noun is a noun that refers to some entity as an undifferentiated unit rather than as something with discrete subsets. Non-count nouns are best identified by their syntactic properties, and especially in contrast with count nouns. The semantics of mass nouns are highly...
that refers to leaves as a feature of plants.

Typically a leaf is a thin, flattened organ borne above ground and specialized for photosynthesis
Photosynthesis
Photosynthesis is a chemical process that converts carbon dioxide into organic compounds, especially sugars, using the energy from sunlight. Photosynthesis occurs in plants, algae, and many species of bacteria, but not in archaea. Photosynthetic organisms are called photoautotrophs, since they can...
, but many types of leaves are adapted in ways almost unrecognisable in those terms: not flat (such as many succulent leaves
Succulent plant
Succulent plants, also known as succulents or fat plants, are water-retaining plants adapted to arid climates or soil conditions. Succulent plants store water in their leaves, stems, and also in roots...
and conifers
Pinophyta
The conifers, division Pinophyta, also known as division Coniferophyta or Coniferae, are one of 13 or 14 division level taxa within the Kingdom Plantae. Pinophytes are gymnosperms. They are cone-bearing seed plants with vascular tissue; all extant conifers are woody plants, the great majority being...
), not above ground (such as bulb
Bulb
A bulb is a short stem with fleshy leaves or leaf bases. The leaves often function as food storage organs during dormancy.A bulb's leaf bases, known as scales, generally do not support leaves, but contain food reserves to enable the plant to survive adverse conditions. At the center of the bulb is...
scales), or without photosynthetic function (consider for example cataphylls
Cataphyll
In plant morphology, a cataphyll is a leaf whose primary function is something other than photosynthesis...
, spines
Thorns, spines, and prickles
In botanical morphology, thorns, spines, and prickles are hard structures with sharp, or at least pointed, ends. In spite of this common feature, they differ in their growth and development on the plant; they are modified versions of different plant organs, stems, stipules, leaf veins, or hairs...
, and cotyledons
Cotyledon
A cotyledon , is a significant part of the embryo within the seed of a plant. Upon germination, the cotyledon may become the embryonic first leaves of a seedling. The number of cotyledons present is one characteristic used by botanists to classify the flowering plants...
).

Conversely, many structures of non-vascular plants, or even of some lichen
Lichen
Lichens are composite organisms consisting of a symbiotic organism composed of a fungus with a photosynthetic partner , usually either a green alga or cyanobacterium...
s, do look and function much like leaves.