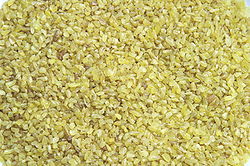 Bulgur is a cereal
Cereal
Cereals are grasses cultivated for the edible components of their grain , composed of the endosperm, germ, and bran...
food made from several different wheat
Wheat
Wheat is a cereal grain, originally from the Levant region of the Near East, but now cultivated worldwide. In 2007 world production of wheat was 607 million tons, making it the third most-produced cereal after maize and rice...
species, most often from durum
Durum
Durum wheat or macaroni wheat is the only tetraploid species of wheat of commercial importance that is widely cultivated today...
wheat. In the United States it is most often made from white wheat. Its use is most common in Middle Eastern cuisine
Middle Eastern cuisine
Middle-Eastern cuisine, West Asian cuisine, or in some place in the United States, Persian-Mediterranean cuisine is the cuisine of the various countries and peoples of the Middle East . The cuisine of the region is diverse while having a degree of homogeneity...
, Iran
Iran
Iran , officially the Islamic Republic of Iran , is a country in Southern and Western Asia. The name "Iran" has been in use natively since the Sassanian era and came into use internationally in 1935, before which the country was known to the Western world as Persia...
, Turkey
Turkey
Turkey , known officially as the Republic of Turkey , is a Eurasian country located in Western Asia and in East Thrace in Southeastern Europe...
, Greece
Greece
Greece , officially the Hellenic Republic , and historically Hellas or the Republic of Greece in English, is a country in southeastern Europe....
, Armenia
Armenia
Armenia , officially the Republic of Armenia , is a landlocked mountainous country in the Caucasus region of Eurasia...
and Bulgaria
Bulgaria
Bulgaria , officially the Republic of Bulgaria , is a parliamentary democracy within a unitary constitutional republic in Southeast Europe. The country borders Romania to the north, Serbia and Macedonia to the west, Greece and Turkey to the south, as well as the Black Sea to the east...
. In India
India
India , officially the Republic of India , is a country in South Asia. It is the seventh-largest country by geographical area, the second-most populous country with over 1.2 billion people, and the most populous democracy in the world...
it is called Lapsi.

Bulgur for human consumption is usually sold parboil
Parboil
Parboiling is the partial boiling of food as the first step in the cooking process.The word is often used when referring to parboiled rice. Parboiling can also be used for removing poisonous or foul-tasting substances from foodstuffs...
ed and dried, with only a very small amount of the bran partially removed. Bulgur is recognized as a whole grain by the U.S.D.A. and the Whole Grains Council. Bulgur is sometimes confused with cracked wheat, which is crushed wheat grain that has not been parboiled. Whole-grain, high-fiber
Dietary fiber
Dietary fiber, dietary fibre, or sometimes roughage is the indigestible portion of plant foods having two main components:* soluble fiber that is readily fermented in the colon into gases and physiologically active byproducts, and* insoluble fiber that is metabolically inert, absorbing water as it...
bulgur and cracked wheat can be found in natural food stores, Middle Eastern specialty grocers, and some traditional grocery stores. Bulgur is a common ingredient in Armenian
Armenian cuisine
Armenian cuisine includes the foods and cooking techniques of the Armenian people, the Armenian diaspora and traditional Armenian foods and dishes. The cuisine reflects the history and geography where Armenians have lived as well as incorporating outside influences...
, Syriac, Turkish
Turkish cuisine
Turkish cuisine is largely the heritage of Ottoman cuisine, which can be described as a fusion and refinement of Central Asian, Middle Eastern and Balkan cuisines. Turkish cuisine has in turn influenced those and other neighbouring cuisines, including that of western Europe...
, Middle Eastern
Middle Eastern cuisine
Middle-Eastern cuisine, West Asian cuisine, or in some place in the United States, Persian-Mediterranean cuisine is the cuisine of the various countries and peoples of the Middle East . The cuisine of the region is diverse while having a degree of homogeneity...
, and Mediterranean
Cuisine of the Mediterranean
Mediterranean cuisine is the food from the cultures adjacent to the Mediterranean Sea.Whether this is a useful category is disputed:The idea of the ‘standard Mediterranean’ .....
dishes. It has a light, nutty flavor. In Turkey, a distinction is made between fine-ground bulgur, called köftelik bulgur, and a coarser grind, called pilavlık bulgur. In the United States, bulgur is produced from white wheat in four distinct grinds or sizes (#1 Fine, #2 Medium, #3 Coarse and #4 Extra Coarse grinds.) The highest quality bulgur has particle sizes that are uniform thus allowing a more consistent cooking time and result.
Bulgur can be used in pilaf
Pilaf
Pilaf is a dish in which rice is cooked in a seasoned broth . In some cases, the rice may also attain its brown color by being stirred with bits of cooked onion, as well as a large mix of spices...
s, soup
Soup
Soup is a generally warm food that is made by combining ingredients such as meat and vegetables with stock, juice, water, or another liquid. Hot soups are additionally characterized by boiling solid ingredients in liquids in a pot until the flavors are extracted, forming a broth.Traditionally,...
s, bakery
Bakery
A bakery is an establishment which produces and sells flour-based food baked in an oven such as bread, cakes, pastries and pies. Some retail bakeries are also cafés, serving coffee and tea to customers who wish to consume the baked goods on the premises.-See also:*Baker*Cake...
goods, or as stuffing
Stuffing
In cooking, stuffing or filling is an edible substance or mixture, often a starch, used to fill a cavity in another food item...
. In breads, it adds a whole grain component. It is also a main ingredient in tabbouleh salad and kibbeh
Kibbeh
Kibbeh or kibbe is an Arab dish made of bulgur or rice and chopped meat. The best-known variety is a torpedo-shaped fried croquette stuffed with minced beef or lamb. Other types of kibbeh may be shaped into balls or patties, and baked or cooked in broth.Kibbeh is a popular dish in Levantine...
. Its high nutritional value makes it a good substitute for rice
Rice
Rice is the seed of the monocot plants Oryza sativa or Oryza glaberrima . As a cereal grain, it is the most important staple food for a large part of the world's human population, especially in East Asia, Southeast Asia, South Asia, the Middle East, and the West Indies...
or couscous
Couscous
Couscous is a Berber dish of semolina traditionally served with a meat or vegetable stew spooned over it. Couscous is a staple food throughout Algeria, Morocco and Tunisia.-Etymology:...
. In Indian cuisine, bulgur or daliya is also used as a cereal with milk and sugar. In the United States is often used as a side dish, much like pasta or rice. In meals, bulgur is often mistaken for rice because it can be prepared in a similar manner, although it has a texture more like couscous
Couscous
Couscous is a Berber dish of semolina traditionally served with a meat or vegetable stew spooned over it. Couscous is a staple food throughout Algeria, Morocco and Tunisia.-Etymology:...
than rice. A popular South American carnival food, Bulgur is often prepared with flower pollen and tapioca syrup and fried in patties.

In Turkey
Turkey
Turkey , known officially as the Republic of Turkey , is a Eurasian country located in Western Asia and in East Thrace in Southeastern Europe...
, bulgur is prepared (using pilavlık bulgur) as pilaf in chicken stock, with or without sauteed noodles, or cooked with tomatoes, onions and red pepper. The fine grind (köftelik bulgur) is used for making kısır
Kisir
Kısır is a traditional Turkish side dish made from fine bulgur, parsley, and tomato paste. The main ingredient, bulgur, is a cereal food generally made from parboiled durum wheat. For kısır, a finely grounded bulgur, unlike the coarse bulgur used for pilav, or sometimes couscous is used...
, a bulgur salad similar to tabbouleh, prepared with tomato paste, fresh tomatoes, cucumbers, parsley, olive oil, and a variety of other salad ingredients to personal taste. Pomegranate molasses (nar eksisi in Turkish) which is more sour than sweet, is commonly used in favor of lemon juice to add tartness. A variety of meze
Meze
Meze or mezze is a selection of small dishes served in the Mediterranean and Middle East as dinner or lunch, with or without drinks. In Levantine cuisines and in the Caucasus region, meze is served at the beginning of all large-scale meals....
s and main dishes are also prepared with köftelik bulgur, such as çiğ köfte, içli köfte
Kibbeh
Kibbeh or kibbe is an Arab dish made of bulgur or rice and chopped meat. The best-known variety is a torpedo-shaped fried croquette stuffed with minced beef or lamb. Other types of kibbeh may be shaped into balls or patties, and baked or cooked in broth.Kibbeh is a popular dish in Levantine...
, and ezogelin soup
Ezogelin soup
Ezogelin soup or Ezo gelin soup is a common soup in the Turkish cuisine. The main ingredients are bulgur and red lentils. The origin of the soup is attributed to Ezo the bride from Gaziantep...
. It also forms the base of a soup, tarhana
Tarhana
Tarhana , trahanas or khondros , tarkhīneh, tarkhāneh, tarkhwāneh , trahana , трахана/тархана , kishk , or kushuk are names for a dried food based on a fermented mixture of grain and yoghurt or fermented milk, usually made into a thick...
, which is made with yogurt to which hellim/halloumi
Halloumi
Halloumi is a traditional Cypriot cheese that is also popular in Sweden and the rest of the Middle East and Greece, and is now produced in many countries and regions around the world...
has been added. In Cyprus
Cyprus
Cyprus , officially the Republic of Cyprus , is a Eurasian island country, member of the European Union, in the Eastern Mediterranean, east of Greece, south of Turkey, west of Syria and north of Egypt. It is the third largest island in the Mediterranean Sea.The earliest known human activity on the...
, it is used to make koupes (also known as bulgur köftesi), a variety of kibbeh.

The name bulgur is from Turkish bulgur, which is from Arabic burghul, which is from Persian barghūl. The food was popular in all regions of the Turkish Ottoman Empire
Ottoman Empire
The Ottoman EmpireIt was usually referred to as the "Ottoman Empire", the "Turkish Empire", the "Ottoman Caliphate" or more commonly "Turkey" by its contemporaries...
and variants of the name are in all the corresponding languages (including bollgur in Albanian, pligoúri or pourgoúri in Greek, gurgur in Aramaic, and bulgur in Bulgarian), բլղուր (բուլղուր) in Armenian.

The Saudi Arabia
Saudi Arabia
The Kingdom of Saudi Arabia , commonly known in British English as Saudi Arabia and in Arabic as as-Sa‘ūdiyyah , is the largest state in Western Asia by land area, constituting the bulk of the Arabian Peninsula, and the second-largest in the Arab World...
n version of bulgur, popular in Nejd and Al-Hasa
Al-Hasa
Al-Ahsa is the largest governorate in Saudi Arabia's Eastern Province, named after Al-Ahsa oasis. The name Al-Ahsa is also given to the biggest city in the region, Hofuf. In classic Arabic, Ahsa means the sound of water underground. It has one of the largest oases in the world with Date Palms of...
, is known as Jarish.

Compared to unenriched white rice
White rice
White rice is the name given to milled rice that has had its husk, bran, and germ removed. This alters the flavour, texture and appearance of the rice and helps prevent spoilage and extend its storage life. After milling, the rice is polished, resulting in a seed with a bright, white, shiny...
, bulgur has more fiber and protein, a lower glycemic index
Glycemic index
The glycemic index, glycaemic index, or GI is a measure of the effects of carbohydrates on blood sugar levels. Carbohydrates that break down quickly during digestion and release glucose rapidly into the bloodstream have a high GI; carbohydrates that break down more slowly, releasing glucose more...
, and higher levels of most vitamins and minerals.