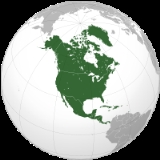 Overview
North America is a continent wholly within the Northern Hemisphere
Northern Hemisphere
The Northern Hemisphere is the half of a planet that is north of its equator—the word hemisphere literally means “half sphere”. It is also that half of the celestial sphere north of the celestial equator...
and almost wholly within the Western Hemisphere
Western Hemisphere
The Western Hemisphere or western hemisphere is mainly used as a geographical term for the half of the Earth that lies west of the Prime Meridian and east of the Antimeridian , the other half being called the Eastern Hemisphere.In this sense, the western hemisphere consists of the western portions...
. It is also considered a northern subcontinent
Subcontinent
A subcontinent is a large, relatively self-contained landmass forming a subdivision of a continent. By dictionary entries, the term subcontinent signifies "having a certain geographical or political independence" from the rest of the continent, or "a vast and more or less self-contained subdivision...
of the Americas
Americas
The Americas, or America , are lands in the Western hemisphere, also known as the New World. In English, the plural form the Americas is often used to refer to the landmasses of North America and South America with their associated islands and regions, while the singular form America is primarily...
. It is bordered to the north by the Arctic Ocean
Arctic Ocean
The Arctic Ocean, located in the Northern Hemisphere and mostly in the Arctic north polar region, is the smallest and shallowest of the world's five major oceanic divisions...
, to the east by the Atlantic Ocean
Atlantic Ocean
The Atlantic Ocean is the second-largest of the world's oceanic divisions. With a total area of about , it covers approximately 20% of the Earth's surface and about 26% of its water surface area...
, to the southeast by South America
South America
South America is a continent situated in the Western Hemisphere, mostly in the Southern Hemisphere, with a relatively small portion in the Northern Hemisphere. The continent is also considered a subcontinent of the Americas. It is bordered on the west by the Pacific Ocean and on the north and east...
, and to the west and south by the Pacific Ocean
Pacific Ocean
The Pacific Ocean is the largest of the Earth's oceanic divisions. It extends from the Arctic in the north to the Southern Ocean in the south, bounded by Asia and Australia in the west, and the Americas in the east.At 165.2 million square kilometres in area, this largest division of the World...
.

North America covers an area
Area
Area is a quantity that expresses the extent of a two-dimensional surface or shape in the plane. Area can be understood as the amount of material with a given thickness that would be necessary to fashion a model of the shape, or the amount of paint necessary to cover the surface with a single coat...
of about 24,709,000 square kilometers (9,540,000 square miles), about 4.8% of the planet's surface or about 16.5% of its land area.

When did foxtail millet first appear in north america,was it carried here by the indians,has ther been a dna test done to determine any of this?
More

Which physical eature served as the western boundary for settlement in North America before 1771 ?

1497    John Cabot lands in North America at Newfoundland leading the first European exploration of the region since the Vikings.

1527    The first known letter from North America is sent by John Rut while at St. John's, Newfoundland.

1535    French explorer Jacques Cartier sets sail on his second voyage to North America with three ships, 110 men, and Chief Donnacona's two sons (whom Cartier had kidnapped during his first voyage).

1620    The ''Mayflower'' departs from Southampton, England on its first attempt to reach North America.

1620    The Pilgrims sail from Plymouth, England, on the ''Mayflower'' to settle in North America. (Old Style date; September 16 per New Style date.)

1670    King Charles II of England grants a permanent charter to the Hudson's Bay Company to open up the fur trade in North America.

1679    The brigantine ''Le Griffon'', commissioned by René Robert Cavelier, Sieur de La Salle, is towed to the south-eastern end of the Niagara River, to become the first ship to sail the upper Great Lakes of North America.